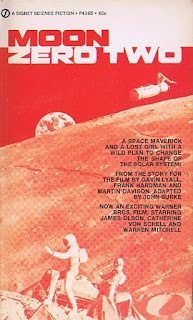 I liked the Moon Zero Two movie a lot. As you say it has that feel of the really cool future that we thought we were going to get but didn't. I kind of enjoyed the novel as well although again I agree with you that it's not as good as the movie.

And I agree entirely about Journey To The Far Side Of The Sun. A very nifty little sci-fi movie which was Gerry Anderson's first attempt at live-action sci-fi.

You know I never heard of either the book or the movie.

'Moon Zero Two' is indeed a strange movie. The animated opening titles suggest its going to be a wild and wacky comedy and, well...it isn't. Its worth watching mainly for the lovely Catherine Schell. This would have the first and last 'space Western' until Peter Hyams made 'Outland' in 1981 staring Sean Connery.

I would only buy this book if it plays the theme song when you open the cover.

Speaking of that "whacky" opening, my one problem with it is how along the way it makes the "good guy" so thoroughly ruthless. Which is something I wouldn't mind if he started out that way, and the story made him an all-out "badass" from the start. But instead, he starts out as a sort of "morose" main character, and along the way you get things like that scene where he tests out the poisoned oxygen tank by sticking it in the mouth of one of the villains (!), as opposed to maybe THREATENING to do that. Maybe I "overthink" this film, but that interferes with it for me.

Almost no one likes the original MYSTERY SCIENCE THEATER 3000 more than I do, but almost no fan of it criticizes it more than I do either. And one of my complaints is that it sometimes has its own version of "virtue-signaling" type comedy. For one thing, any given time a film shows something like a high school from the ' 50s, you not only hear "entitled white people" jokes - which makes sense - but you hear the comedians really O.D. on that subject! ("Catalina Caper" is an episode I keep wanting to switch off for that reason.)

I thought it was a lot of fun.