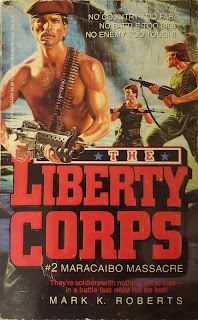 Man these Liberty Corps covers crack me up – I mean shirtless and a beret; you can almost hear the Village People on the soundtrack – and sadly it’s the covers that are proving to be the only memorable thing about this series. Mark Roberts continues to write a war novel in all but name; while thankfully shorter than the first volume, Maracaibo Slaughter is still a long, trying read, with our author more concerned with how one supplies an army and entertains its men instead of providing the action thrills one would expect from the men’s adventure genre.

Also again Roberts assails us with way too many Legionnaires to keep track of, but he does at least settle on a nominal “main character:” Colonel Lew Cutler, who served in this capacity last time. It’s curious that Cutler serves as Roberts’s main protagonist, given that Cutler isn’t even officially a member of the American Foreign Legion (aka the “Liberty Corps”); he’s their contact with the regular army. He doesn’t do much in this one, though, mostly flying around on Legion business, hooking up with one babe, getting dumped by her, then hooking up with another. He doesn’t even factor into the climactic battle.

We get the same setup as last time, with the first third of the novel concerned with daily life at the various Legion outposts and bases in America and Africa, and the last quarter devoted to a practically endless military skirmish. And like the previous volume this battle is presented in a military fiction vein, to the extent that one feels he’s reading a nonfiction book about some obscure battle in South America. We’re talking tanks, airplanes, sea vessels, the works, and in all cases it’s one-off Legionnaires who are doing the fighting, robbing the book of any kind of basic action thriller vibe. These characters are all faceless ciphers so there’s no excitement on offer, or at least there wasn’t for me. The honest truth is the book was a bitch to read.

But the thing is, Roberts clearly was into it. He clearly strives to juggle a wide cast of characters, downplaying the pulpish nature of earlier work on The Penetrator and such. Even the usually-egregious Commie-bashing is gone, though we again get some reminders of the seditious US media (if only Roberts could see them now!!). Here we learn the phrase “CLAM,” ie “commie-liberal American media,” which an African native claims to have read in an American gun magazine years before, as he tells Cutler about it over some beers. Otherwise the Commies, again following the orders of mysterious Arkady, constantly try to get moles on Corsair Cay, ie the island HQ of the Legion, off the coast of South Carolina.

This actually leads to one of the few action scenes in the first hundred pages of the book; one of the Red spies tries to take out Cutler and Legion commander Stand Waite, but fails on his first attempt on Cutler, later to be captured by Waite. But man that’s about it. Otherwise it’s a long haul of Waite trying to hire a chef for the base, opening a brewery for the men…even tasking Cutler with hiring someone to retrofit a ship so it can be used as a pleasure cruise line for the soldiers! This actually causes Cutler to get laid, for the second time in the book, though both events happen off-page for the most part, Roberts also toning way down on the dirty stuff. First it’s via a blonde British babe who is hired to do computer stuff for Corsair Cay, then after she dumps him and he nurses a broken heart for a while, Cutler hooks up with redheaded mega-babe TJ Tarkington, who makes her living retrofitting sailing vessels.

Meanwhile we’ve met the villains of the piece; army-backed Colombian drug runners who are in the process of taking over Venezuela. We know they’re real bad because when they’re introduced into the narrative they’re in the process of gunning down Venezuelan innocents – men, women, and even little children. Unfortunately it will take a good hundred pages of padding to see these bastards get sent to hell; President Hunter doesn’t even task Waite with the Venezuela issue until page 84, and it’s not until page 142 that the assault begins. We get more confirmation that Liberty Corps is more of a military fiction series when Waite informs his troops that he plans for a six-month campaign.

As last time the action is given over to one-off Legionnaires on the ground, sea, and air engaging faceless enemy troops; there’s none of the personal thrust of the typical men’s adventure novel. Even the sadist who ordered the killing of the kids early in the book is sort of brushed off in the climactic action, the objective more around staving off the well-armed drug runners who are encroaching into Venezuela. In fact, this is the sort of thing that passes for action:

Dust and debris filled the air along the bank of the Uribante River. James Dean Watton’s spotter, Burke Norton, had shown up in time to convey the awesome news of the approach of Colombia’s crack armor and infantry. Across from the ford, Lieutenant Colonel Asiro Tachikawa deployed the First Cohort hurriedly. A mass of Colombian armor had been spotted approaching at high speed. While the harried Legionnaires hustled into fighting positions, Tachikawa sat slumped in his command post, eyes closed, while he sipped a cup of bancha. The bitter brew, made with green tea leaves and whole-grain rice, soothed him. Outside, all resembled fall-down day at the Tower of Babel.

In the end the Colombian army is crushed, Venezuela liberated, and the main drug runner gunned down, but man it’s a chore to get there. Overall Liberty Corps has become one of my least favorite series ever.
Posted by Joe Kenney at 6:30 AM