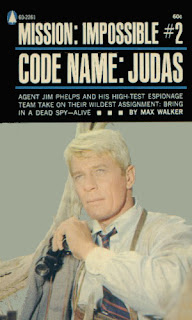 The second installment of the four-volume Mission: Impossible tie-in series isn’t by Walter Wager, who wrote the first one; whereas Wager posed as “John Tiger” for his book, this second volume is credited to “Max Walker,” which was a Popular Library house name used by a few writers. One of these writers was Michael Avallone, who served as “Max Walker” for his 1970 novelization of The Last Escape, and perhaps it’s due to this that most assume that Avallone also wrote the second and third Mission: Impossible tie-ins. However, it’s clearly not Avallone – his style is not evident at all in Code Name: Judas – and thus was the work of some other still-unknown writer. (I also recall seeing a thread somewhere, years ago, where someone who knew Avallone said that Avallone himself stated that neither of the “Max Walker” Mission: Impossible novels were by him.)

At 126 pages of big ol’ print, Code Name: Judas is more of a glorified novella. It’s definitely fast-moving, filled with shootouts and car chases. As a swinging ‘60s spy thriller, it’s a success. But as a Mission: Impossible novelization, it’s a failure. While Wager clearly was familiar with the show, Walker only seems to be aware of the minor details, ie the names of the protagonists and the fact that they each have different specialties. Otherwise he turns in something wholly different from the show. Impossible Missions Force leader Jim Phelps is the star here, with the other IMF members getting minor spotlight. In this regard the book is like any other generic ‘60s spy yarn, featuring a square-jawed, action-prone hero with a love for danger. He even packs a gadget sort of gun – a .32 caliber pistol hidden in the brass buckle of his belt.

Unlike the strong and silent strategist of the actual show, this Jim Phelps has an eye for the ladies and looks at the espionage business as a “game.” He also lacks the thorough planning of his TV counterpart; Code Name: Judas breaks the cardinal rule of Mission: Impossible in that not only is Phelps’s cover blown, but outside disturbances threaten to wreck the entire IMF plot. The planning in the show ran with clockwork precision, even the “mistakes” usually revealed to be part of Phelps’s master plan. Not so here. But then, Walker has turned in something that would seem more in-line with one of the Eurospy movies of the day; it’s all fistfights, shootouts, and car chases as various enemy agents try to take out Phelps.

We meet Phelps in Paris, having just broken off a nightcap engagement with some busty Swedish babe he’s met. Word has come in that there’s a new assignment, thus he goes to an electronics repair shop to pick up his dictacting machine. Inside the booth, after trading a code phrase with the proprietor, Phelps is given his mission via audio recording; the tape erases itself after playing. This, followed by the bit where Phelps looks through a dossier of IMF agents to pick out his team, will be the only scene in the novel that vaguely seems like Mission: Impossible. Phelps’s mission, should he choose to accept it, is to find out if a notorious freelance spy codenamed Atlas has really died in a car crash in Geneva, and if he’s still alive to find out what Atlas has learned about Red China’s plans for nuclear weaponization.

Of course after some deliberation Phelps picks the same team as appeared in every season 2-3 episode: electronics whiz Barney Collier, honeytrap Cinnamon Carter, strongman Willy Armitage, and master thespian Rollin Hand. Walker doesn’t know what to do with them, really; Barney’s gift for invention only comes into play in the climax, with a crane-like contraption which is built and used virtually off-page, Willy spends the entire novel posing as a hotel valet (save for one part where he carries a guy wrapped up in an exercise mat), Cinnamon poses as a nightclub chanteuse (with Barney as her piano player!), and Rollin poses as an addled tourist from the Midwest. Meanwhile Phelps does all the heroic man of action stuff, acting more like a field agent than a strategist; in this way the novel predicts where the series would ultimately go, particularly when Martin Landau (aka Rollin Hand) and Barbara Bain (aka Cinnamon Carter) left the show. (And I still like the final two seasons the best!)

We know we’re in for a different sort of Mission: Impossible immediately after Phelps receives his audio briefing; the proprietor of the repair shop is abducted by a group of gunmen, taken off for interrogation. Then on the flight to Geneva Phelps is bored by an “old Brixton” in the seat next to him who won’t stop talking about this or that; the man insists Phelps take the book he’s reading. Upon arrival in his hotel Phelps will discover the book is actually a bomb. Thus he knows his cover has been blown – and the assignment’s just started! The IMF team all operate out of the same Geneva hotel, Phelps as a banker here to “investigate the credit” of Cinnamon’s character. And Rollin is posing as the cousin of the man killed in the car crash, the man who might or might not have been Atlas: I forgot to mention, but Atlas has never been properly photographed, and one thing known about him is that he wears a false nose, his real one blown off in WWII. It’s suspected that he staged his death here, using a phony passport. Thus Rollin poses as the phony “cousin” of this phony “car crash victim.”

Honestly, the stuff with Rollin, Cinnamon, and Barney is page-filling at its worst; Willy isn’t included because Walker doesn’t even waste any time on him. The dude literally spends the majority of the tale off-page, posing as a valet. But again there’s little fidelity to the true Mission: Impossible vibe; Rollin is confronted by Swedish authorities who accuse him of being Atlas, here to cover his tracks, so Rollin takes a pseudo-cyanide pill which mocks heart attack symptoms. With the help of an apparently-pretty nurse – alternately described as chunky or leggy – he’s able to free himself. We also get a lot of padding about Cinnamon singing various torch songs in the hotel club, Barney doing his best to accompany her on piano. It’s very evident that Walker is struggling to justify the presence of these other IMF members, but ultimately they don’t contribute much.

Instead, and again unlike the actual show, things move along due to outside interferences. The old Brixton shows up in Phelp’s room one night and announces he was previously with “the other side” but wants to come over to Phelps’s. He claims he was pushed into those failed assassination attempts, and also that he too is here to find Atlas, and also might know where he is. This leads to another very un-Mission: Impossible-esque moment, as he and Phelps get in a car-chase/shootout, one that leaves the old man dead. From his dying words Phelps learns that Atlas is in disguise in the very same hotel Phelps and his team is staying in, taking us into a Scooby Doo sort of finale in which Atlas is outed, of course via yanking off his fake nose!

But this too is out of touch with the show’s vibe; it happens during a knock-down drag-out fight between Atlas and Phelps in the hotel gym. Phelps gets the upper hand, which leads to the aforementioned scene of Willy carrying an unconscious Atlas in a gym mat up to Phelps’s room. But even here things continue in your everday spy pulp vibe, with “enemy agents” capturing Cinnamon and offering her in exchange for Atlas. Phelps goes against the IMF policy – ie that a mission is a success if the goal is achieved, not necessarily if none of the IMF agents are injured or killed – and plans to rescue her. Here Willy’s crane device is quickly used to hoist Cinnamon to safety while the enemy agents are blown up. Walker can’t even pan out on his own subplots; we know early on there’s a brawny Chinese agent with martial arts skills who is also after Atlas, but we never even meet him, and must assume he’s one of these enemy agents!

Humorously, the book caps off with Phelps and his team having brief moments of reflection; Willy regrets he gets all the grunt work but he’s happy to see it’s going to be a sunny day today(!), Cinnamon realizes “the boys” came to her rescue and thus plans to reward them in some way (one wonders what the hell that is going to lead to), Rollin enjoys losing himself in his roles, Barney enjoys using his skills for invention, and Phelps enjoys the game itself. And that’s it, folks – we’re informed that the last part of Phelps’s plan involves smuggling Atlas back to the US so the Red Chinese info can be extracted from him, but all we see is a goofy scene where he’s hidden inside a piano and Barney, still posing as a pianist, fools some customs agents into letting it through. We don’t even find out what happens to Atlas, the info, anything – we just end the tale knowing that Phelps is about to get lucky with the Swedish babe he almost hooked up with at novel’s start.

While it’s definitely not what you’d expect from Mission: Impossible, Codename: Judas is a perfectly fine piece of ‘60s pulp spy-fi. Oh and I forgot to mention, the otherwise-inexplicable title comes from Cinnamon, who claims that Atlas is a “Judas” given to his willingness to sell info to any power. I assume Popular Library came up with the title and Walker had to justify it somehow. Anyway, it will be interesting to see if the same Walker wrote the next one; Wager didn’t return until the fourth (and final) volume of the series. No guesses on who this Walker was; his style (or her style, come to think of it) is fairly bland, just giving the necessary info and moving on. Other than a fondness for paranthetical sentences, there’s really nothing noteworthy about the style, or any clues about who the author might’ve really been.
Posted by Joe Kenney at 6:30 AM

And it still manages to be more faithful to M:I than most of the movies!