Balzan Of The Cat People #2: The Caves Of Madness 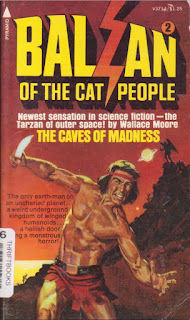 Balzan Of The Cat People #2: The Caves Of Madness, by Wallace Moore
July, 1975  Pyramid Books

The “Tarzan of outer space” returns in the second volume of Balzan, with comics scribe Gerry Conway again serving as “Wallace Moore.” One suspects though that series producer Lyle Kenyon Engel must’ve figured he hired the wrong author for this particular series, as it soon becomes clear that Conway isn’t really into it – and certainly doesn’t like his protagonist. Reading The Caves Of Madness also makes it clear why there was only one more volume in the series.

Picking up some short but unspecified time after the first volume, this installment takes place entirely in the titular caves, with Balzan desperately trying to find a family with either of the two winged races that live here beneath the ground. For here is the big, big problem with Balzan: rather than the Tarzan/Conan-esque badass we might want, a rebel loner blitzing his way through an alien landscape, our hero is more of a needy type, lonely and feeling like an outcast, given that he’s the only human on this planet. Poor Balzan just wants to be loved, folks. While it’s all endearing and precious and etc, it sure as hell isn’t what I want when the cover shows a wildman sporting a knife, with the proclamation “the Tarzan of outer space” emblazoned above him.

So I’m betting Engel wanted one thing and Conway delivered another. He tries to have his cake and eat it, too, for despite being a maudlin, melancholy sad sack, Balzan is also a primo asskicker, so good at fighting and killing that he fears he enjoys it too much. (Despite which the dude is knocked out four times within the first 77 pages.) Indeed, practically the entirety of The Caves Of Madness is given over to various characters shaming Balzan for his brashness, for how prone he is to make violence his first and only recourse. It gets to be tedious after a while, particularly when the novel is much too long…only 150-some pages, but some of the smallest, densest copy you’ll ever see in an old paperback…almost as tiny and dense as the print in that Bantam edition of Gravity’s Rainbow.

Displaying his brashness posthaste, Balzan’s out wandering along the beach one day when he sees a pair of winged humanoid creatures fighting a tentacled blob that’s surfaced. He rushes to the fray, his dagger and therb (ie poisoned whip) at the ready. For his heroism he’s knocked cold, and awakens in the caverns of these distrustful “wingmen” (as Conway constantly refers to them). They have wings, ruddy skin, and hooves, yet otherwise look human enough, I guess. They call themselves the Aeri, and keep Balzan a sort of guest-prisoner, in an alcove high above the rocky ground.

His meals are brought to him by a lovely gal – other than the wings, hooves, and demonic look, that is – named Ryla. Balzan is basically an anthropologist this time around. He – and unfortunately we – learns all about Aeri culture and customs; page-filling at its worst. It’s also goofy as hell. For, just after being with the Aeri for a month, Balzan is able to say things like “protective stasis cube” and the like in their language. This is of course while he’s expositing on his back story, which we already read in the previous book.

Things like this would be easier to digest in the Marvel comics work Conway’s more known for…I could see it all illustrated in Curtis Magazines black and white by John Buscema and Alfredo Alcala (my favorite pairing – though Rudy Nebres was always my favorite artist of all those black & white Marvel mags). But in novel form it comes off as silly and unbelievable. There are even goofy blunders Conway misses; early on, Balzan learns that the term “month” cannot be translated into the Aeri language, as they have no concept of it, given the two moons of the planet or somesuch. Yet several pages later, during a tribal meeting in which the ancient Aeri leader takes questions from his people, one of the women states that she has not yet waited “the thirteen months of mourning” after the death of a loved one. So do the Aeri know what a month is or not?

But the novel really is Balzan the Anthropologist; the dude is just way too interested in the people he meets, so that the violent revenge angle of the previous book is lost. I mean, I liked the first book way better than this one, and the first one was kind of a chore to get through at times. And things that should be exploited are left to the reader’s imagination – like the little tidbit of Balzan finally getting laid. As we’ll recall, he was prudish and standoffish to “hmmmm” levels in the the previous book; this time he can’t get lucky quick enough with Ryla (she of the red skin, wings, and friggin hooves, let’s recall). So is this Balzan’s first time or what? Conway doesn’t say. He also doesn’t get more descriptive than, “This time, when they kissed, they didn’t break apart.” Hot stuff!

There’s a bit of action to liven up the anthropological tedium. Another group of winged peoples attacks the Aeri, and Balzan leaps into the fray with therb and dagger, killing with glee. The Aeri are almost massacred, including women and children, and Balzan fights hard, which makes the following scene so WTF? Balzan mopes and sulks and tells a consoling Ryla to beat it. Why? Because Balzan worries that he “enjoys killing too much.” Uh, didn’t you just kill off a bunch of murderers, Balzan? It’s not like you were out thrill-killing in the caves of madness.

Anyway, these other winged people are the Mandagarr, ancient enemies of the Aeri. Conway isn’t much for description, which is humorous given how overwritten the book is, but apparently they look just like the Aeri, only with grayish skin. Balzan is eventually kidnapped by these freaks, and as if in defiance of all reader expectations, Conway writes practically the exact same stuff again – Balzan’s kept a sort of prisoner-guest and taught all about the customs of these winged people, including their language, living among them for a few months.

As if displaying the paucity of imagination rampant throughout the book, not only is Balzan again hooked up with a lovely lady (other that is than the wings, gray skin, and friggin hooves), but this lady, Cho, has a brother who distrusts Balzan – exactly the same setup as in the Aeri section of the novel. The brothers are even named similarly: Hiro and Kimo! This part too drags on, with Balzan first scoring (again nondescriptively) with Cho, who is like the town whore for the month. In what would easily trigger the sensitive types of today, we are informed that every woman in the Mandagarr community serves as a communal whore for a month or so, loving all men equally, so that there are no feelings of possession or love or what have you…and when she gets pregnant, the man responsible (if they know who it be) only helps to take care of the child, he does not act as her husband.

It’s just kinda…stupid. By this time in the previous book, Balzan would’ve fought in a few gladiatorial matches and killed some monsters. Seriously, folks, this time he sits around in these goddamn caves with their glowing fungi and listens to lots of exposition about various customs and beliefs, and then later is chastized by these same freaks for his brashness. The Aeri and Mandagarr sequences are so similar that I was kind of impressed with Conway for ripping himself off in the same book. Anyway, Balzan falls in love with Cho for some reason, and the only thing to differentiate her from Ryla is that she’s more caring or somesuch.

Balzan’s also an idiot. He can’t make up his mind if he wants to stay with the Mandagarr, if he trusts them or not, and occasionally makes breakout attempts, killing guards – something for which he’s never punished, mysteriously enough. He also has periodic run-ins with the ancient man who sits in passages beneath the living area, guarding a massive metal door – behind this is the Sl’yth, an almost mythical monster of unimaginable horror. As if again displaying that paucity of imagination, when Conway gets around to describing the creature, all he tells us is it’s a “slime-encrusted demon.” Again, you can clearly see how this guy made his living writing comics, where the visual stuff was filled in by artists.

Balzan sulks again when he learns the Mandagarr have been hoping he’d impregnate Cho, as it develops their race is dying – as are the Aeri – and it was hoped Balzan’s seed would start new life. Uh, you all are different species, but what the hell. Cho does get pregnant…and Balzan stays with the Mandagarr…then three months later Cho loses the child. The Tarzan of Outer Space!! Seriously, what the hell kind of book was Conway writing?? But Balzan sulks some more and, after killing Hiro (not to be confused with Kimo) in a long-delayed grudge match, he makes his escape.

We’re in the homestretch now. Balzan returns to the Aeri, where Ryla first welcomes him, then gets pissed when she figures Balzan fell in love with some Mandagarr girl. Balzan sulks some more, and uses this to feed his desire for revenge. He leads a war party on the Mandagarr, unleashing the Sl’yth, which practically destroys everyone. Our hero, who massacres entire peoples. Too late he decides to stop the “slime-encrusted demon,” which, you know, he just released. Somehow along the way he finds time to kill Kimo (not to be confused with Hiro) in a long-delayed grudge match. Then Cho reveals herself to be Balzan’s true love, sacrificing herself in what Conway hopes will be an emotional moment but isn’t, because you could give two shits about any of these lifeless characters.

The book ends with Balzan finally getting out of those damned caves and back to the surface world of whatever the hell planet he’s on. The entire novel was like a waystation between wherever Balzan was headed after the previous book, which as mentioned was vastly superior, despite also being kind of terrible. One can only hope that the next volume, ie the last one, does something to salvage this series. But boy, you sure can see why Balzan Of The Cat People only lasted three volume while Engel’s similar Richard Blade lasted for 30+ (or a couple hundred more, if you count the French editions).

Here’s a fun review of The Caves Of Madness at Schlock Value, from whence I lifted the cover scan above.
Posted by Joe Kenney at 6:30 AM

So judging from this review I should stick with Leigh Brackett?

You can say that again! FYI I'll have a review of The Sword of Rhiannon up on Thursday...now that was a superior sword and planet tale.