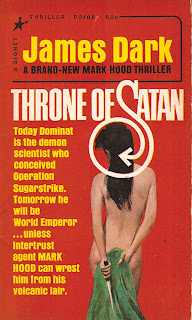 Throne Of Satan, by James Dark
May, 1967  Signet Books

The Mark Hood series continues to get better and better; finally J.E. “James Dark” MacDonnell has apparently decided to go for the pulpy, comic book vibe of the James Bond movies rather than the espionage-heavy vibe of Ian Fleming’s original James Bond novels. The plots are becoming more pulpy and the action, violence, and sex are given greater focus – indeed, one particular scene in Throne Of Satan combines all three.

Picking up immediately after the cliffhanger climax of the previous volume, we find British Intertrust agent Tommy Tremayne struggling for his life as the ship of his captor, Borja, sinks in the Caribbean. Dark pulled a fast one on readers in the final paragraphs of the previous book, as we see here that the mysterious figure that came out of the water and signalled for an approaching Borja-owned helicopter was not a Borja henchman, as assumed, but instead was none other than Tremayne himself. In his pain-wracked stupor he assumed the chopper was one sent by Hood to save him.

But Tremayne’s just gone from the proverbial frying pan into the fire. Borja, the big villain of the previous book, is here revealed just to be a “partner” of a greater figure, a menacing man Borja is taking Tremayne to see right now, Borja still under the mistaken impression that Tremayne is British physicist Charles Battersby. We readers have already met Borja’s partner in the opening of the book: he’s a Blofeld-esque villain who commands legions of followers and lives in a high-tech compound built inside of a hollowed-out volcano! The paralells to the Bond movie You Only Live Twice are strong, which is interesting in that Dark certainly wrote his book before the movie was released (and the sci-fi elements of Roald Dahl’s You Only Live Twice script are nowhere to be found in Fleming’s original novel).

The Blofeld type is named Dominat. As David Foster points out on The Cultural Gutter, the title of the original Australian edition of this volume was Black Napoleon, and there Dominat was clearly identified as being black. As Foster notes, the editors at Signet apparently shied away from Dark’s somewhat-racist views, and edited out all references to Dominat’s race in this US edition. However one can still see trace elements of the original character; the Signet editors should have added material to replace what they removed, as though Dominat’s skin color is never stated, one can still guess it thanks to otherwise-meaningless reactions on the part of Tremayne when he meets the hulking, muscle-bound villain. (For example, that Dominat’s boasting is due to a “sense of inferiority,” which makes no sense within the context of this Signet edition).

Personally I think the Signet editors should’ve made the dude like a purple-skinned freak, but at any rate the Dominat of Throne Of Satan mostly reminded me of Omne, the menacing, super-powered villain in the excrutiating Star Trek novel The Price Of The Phoenix. But anyway Dominat is by far the best villain in the series yet, and another indication of the pulpier, more sci-fi basis the Mark Hood series is thankfully acquiring. (Those first few volumes were slow-going at best!) Dominat rules the island Dominica, “the most savage, most mysterious island in the West Indies,” and his hollowed-out volcano headquarters is called Devil’s Mountain by the natives.

While Tremayne is choppered there by an increasingly-nervous Borja, Mark Hood meanwhile tries to figure out if his pal and partner Tremayne is really dead. He goes out to the wreckage site of Borja’s ship and scuba dives for a look. Here he finds a few papers in waterproof seals. The new action focus of the series is displayed posthaste as Hood is attacked by an enemy frogman wielding a speargun and a sort of underwater shotgun (a shotgun cartridge on a brass spear). This is one of the more brutal and thus exciting fights in the series yet, as Hood again falls back on his karate skills despite being in the ocean. He gives the dude’s arm a fracture break and ends up killing him with his own shotgun spear.

Hood’s found some intel that makes mysterious reference to “Satan” and figures out the “5 3” on the paper is likely indication of “May 3rd,” ie the following day. However Hood’s boss Fortescue back at Intertrust HQ in Geneva doesn’t give a damn and figures Tremayne needs to be “written off” as dead. Instead Fortescue wants Hood to head into the West Indies to look into a bunch of nuclear “rabble rousers” who have disappared, or something. (Again per David Foster’s article, it’s all vague because the book’s first chapter, which clearly identified these villains as black militants, has been excised from the Signet edition.) Oh, and Fortescue is sending over Hood’s karate instructor Murimoto to assist. This is interesting as previously it was made clear that Murimoto was not aware that Hood was a secret agent, but in this volume we’re informed that Murimoto himself is an Intertrust agent used for “special action work.”

Sex is also given a welcome focus here, with Hood going back to his villa and finding a “dusky, scarlet-lipped beauty” waiting for him. (Whether this means she too was black in the original edition is unknown.) Her name is Jane and she claims that she was checking Hood out on the beach that day; she wants some sex asap. From the burning yearning clearly visible in her eyes Hood instantly figures her for a “nymphomaniac,” and figures all this is no doubt a trap – but what the hell, he screws her anyway. Why not? The sex is beyond vague, but at least it’s there – and Dark has fun with it when Jane pulls a stiletto while they are “making love the second time” and tries to kill him. Hood casually deflects the blade, knocks her out, knocks out the girl’s comrade who waits out in the hall, and then calls the cops to come pick them up!

Meanwhile Dominat is given a suitably menacing introduction. Defined by Borja as a “mechanical scientist,” Dominat quickly and easily figures out that Tremayne is not a nuclear physicist – that is, after Dominat has shown off these cool biomechanical arm and leg gizmos he’s created. But now it’s time for Borja to pay for his stupidity, not to mention bungling the previous volume’s caper and losing not only the nuclear reactor core but also that plasma cannon. Dominat produces a steel-tipped bull whip, gives Borja a running start, and then nearly decapitates him with one strike! So much for Borja; meanwhile Dominat figures to keep Tremayne around for a while; mostly, Tremayne figures, just to see him “squirm.”

Dark really keeps Throne Of Satan moving, again making all the deficencies of those early volumes so much more apparent. Just a few hours after having sex with the gal who tried to kill him, Hood, still in Kingston, runs into another sexy gal who gives him a run for his money: Mona Gillespie, an American who once raced against Hood on the Grand Prix circuit. He nearly crashes into her while racing his rented Jag through Kingston after picking up Murimoto, and the lady gives chase in her Ferrari, Hood flying along and ready to battle thinking its yet another enemy agent chasing him down. (Oh, and speaking of women, Marcia, Borja’s sexy neice who had a crush on Hood last volume, is nowhere to be found this time, and indeed isn’t even mentioned. Wonder if Dominat sent her a telegram informing her that he just killed her uncle??)

Hood and Mona have a contentious relationship, with their apparent chemistry masked by snide retorts. We are informed Mona is “not beautiful in the accepted sense” but “attractive in a brown, assured way” (not sure what that really means). Most importantly, she does have a “beautiful body,” well displayed by the brief bikini she happens to be wearing while driving her Ferrari. She also has a twin-diesel clipper and will loan it to Hood; Dark again saying to hell with coincidence, Mona claims to have seen a weird sub-like thing in the water near Dominica island! Hood immediately realizes this is the same thing he saw after that fight with the scuba diver by the wreckage of Borja’s boat. Mona agrees to take Hood and Murimoto out to Dominica.

As stated, Dark really ramps everything up in Throne Of Satan, with Hood scoring yet again, just a few pages after tussling with the would-be assassin Jane; after trying to feel up Mona during one of their spats, Hood inadvertently catches her when the ship jolts in the water next morning, and in the chemistry-laden moment Mona says “Be quick.” They manage to do the deed, once again off-page, in a wopping ten minutes. Meanwhile Dominat takes Tremayne on a long tour of Devil’s Mountain, showing off all of his fancy high-tech wonders like a regular Bond Supervillain and also relaying his intention of first conquering Cuba as a forward base before invading the US.

The finale continues with the smallscale vibe of previous books, despite the fact that Dominat has like legions of followers in his volcano lair. Mona, casually announcing that she works for Dominat, turns Hood and Murimoto over to the villain promptly upon arrival on Dominica and then disappears from the text; we are never informed what happens to her. In Dominat’s control room Tremayne commandeers those biomechanical exoskeleton deals and fights Dominat, but still gets his ass kicked. Then it’s Hood’s turn, and he only fares marginally better. Now it’s up to Murimoto, the living weapon, and we learn how Dominat hates the Japanese. “Come on, little yellow man,” Dominat taunts him, later also calling him a “monkey,” and it’s quite interesting that the Signet editors didn’t feel the need to edit sentiments like those out of the book despite removing all mentions of Dominat being black, isn’t it?

So rather than a huge battle between Hood’s team and Dominat’s forces, the climax is instead comprised of Murimoto calmly beating Dominat half to death. From there it’s a mad dash to escape while a beaten and broken Dominat plummets to the volcano’s core in his “atoborer,” his high-tech tank-drill thing. Devil’s Mountain explodes as our three heroes escape on Mona’s boat (again, no mention what happens to her) and that’s that. While the finale wasn’t as spectacular as I would’ve liked, one can’t complain how snappily Throne Of Satan moves, Dark doling out his tale in a compact 128 pages of fast-moving ‘60s spy action. I really enjoyed it.

I was going to ask if someone thought that Hood's karate master joining was influenced by the Destroyer series, but from the date, I am pretty sure this was published before the first Destroyer.