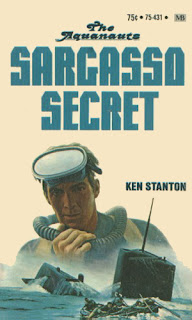 The fourth volume of The Aquanauts is pretty oddball; for the first hundred pages author Manning Lee Stokes appears to be under the impression that he’s writing a murder-mystery – indeed, a murder-mystery starring a septuagenarian Navy admiral! Once again one must wonder if series creator/producer Lyle Kenyon Engel figured he might’ve hired the wrong ghostwriter.

At any rate Stokes’s writing, despite the padding, stalling, and general lack of anything “aquanautical,” is still so readable, at least for me, that I find I don’t really mind the fact that not much at all is happening. Perhaps Engel felt the same, and just let Stokes do his thing. Regardless, the first half of Sargasso Secret will be hard-going for most, especially those who are eager for the Thunderball/Voyage To The Bottom Of The Sea underwater action promised by the series’s concept.

For once again Stokes has taken a series about a kick-ass Navy frogman codenamed “Tiger Shark,” his billion-dollar high-tech submersible KRAB, and turned in a story that really has nothing much to do with any of it, sort of like in the first volume. As mentioned Tiger’s boss, “Old Crusty” Navy admiral Hank Coffin, is the star of the show for the first hundred pages – and my friends, this is perhaps the longest Stokes offering yet, coming in at 224 pages of small print with hardly any white space. Stokes was both prolific and industrious, you have to give him that.

Some unspecified but short time after the previous volume, Admiral Hank Coffin is flying to Hawaii under orders of the President to look into a potential solution to the growing threat of world famine. Sargasso Secret is heavy with the doom and gloom prophecies of the ‘70s, with “world starvation” at one point stated as being a certainty by the ‘80s. Coffin as we’ll recall is chief of SUS, ie the Secret Underwater Service, and he has no idea why the President would task him with this assignment. This is another hallmark of Stokes’s writing – the protagonists are constantly wondering why they’ve been given their latest mission. One wonders if this was Stokes himself bemoaning his latest ghostwriting duty through his characters.

Tiger and his immediate boss Captain Tom Greene are already here in Hawaii; Stokes as ever does well with bringing to life his trio of main protagonists, with Coffin and Greene, closer due to age, bickering and bantering, and alpha male Tiger chomping at the bit to get back into action. They’re here to meet Dr. Lee Choon, a chain-smoking marine biologist of Hawaiian-Chinese descent who, we gradually learn, has formulated a way to synthesize proteins and vegetables out of seaweed. In fact he’s called the Navy reps here to his mansion to eat “thousand dollar steaks,” ie steaks that were created by seaweed harvested at great cost from the Sargasso Sea, near Cuba.

Also here is Choon’s wonderfully-named stepdaughter, Poppy Choon, a free-spirited, vixenish “Eurasian” gal with “large-apple size breasts” who informs Tiger posthaste of her plans to screw him silly. Stokes does get to the good stuff, though per his usual wont it’s only after much dialog and narrative detailing Dr. Choon’s seaweed-harvesting. But our pal doesn’t cheat us when it comes to the sleazy goods; the books are only becoming more explicit as they go on, though Stokes is still his literary self even during all the wanton activities, with lines like, “[Tiger was] providing the phallus on which she immolated herself.”

In fact Stokes is in even more of a “literary” mood than usual in Sargasso Secret; you know for sure this isn’t The Marksman when you come across descriptions like “the soft druggets of radiance cast by the lanterns.” But Stokes is one of the few genre authors I’ve encountered who can write like this and still get appropriately sleazy and pulpy, so the high-brow narative style just adds to the charm. I’ve said before how much I enjoy the guy’s work, and an enjoyment of Manning Lee Stokes’s writing is about the only way you’ll be able to endure the first half of Sargasso Secret.

It’s all in a suspense and mystery mode as Stokes dwells on just a few characters here at Dr. Choon’s mansion. Besides those mentioned there’s also Charles Wong, Choon’s assistant who is obsessed with Poppy and thus instantly jealous of Tiger, and Hideki Sato, a “Jap” agent who has been sent here by his government in coordination with the US, as Japan too has been seeking a means of cultivating food from seaweed. Yet Coffin recognizes Sato and remembers him as a Japanese spy in the pre-WWII years, one who was kicked out of the US.

Eventually we readers see that Sato is pressuring Dr. Choon to turn over his formula to Sato personally, the man acting for himself and blackmailing Choon with his knowledge of some bad stuff Choon was once involved in. All this stuff plays out in very slow-moving prose, with the “action” happening off-page…after Sato delivers his threat to Choon, in the next chapter we learn that a post-coital Tiger took a dip in the pool, only to find Sato’s murdered corpse. One of Choon’s guards has also been killed.

More pedantic time-wasting occurs as, instead of it happening in forward-moving narrative, we’re instead treated to a lot of summarized backstory as the hapless CIA agents tasked with monitoring Choon try to figure out what happened at the doctor’s mansion. Long story short, the place was burned down and everyone disappeared. At long last we’ll learn that Coffin Tiger, Choon, et al likely escaped in a jeep, which they drove to a beach, and then perhaps got on a sub. Of course, this was all the plotting of Hank Coffin, though why he went to such extreme lengths is unstated. When the narrative switches back over to Coffin we learn that “Old Crusty” wisely suspects Choon of killing Sato and the guard.

Finally, on page 118, Stokes remembers that he’s writing a series titled The Aquanauts. Tiger Shark returns as our protagonist and mostly stays for the duration. It’s six weeks later and he’s onboard KRAB, monitoring a prototype “monster sub” named the USS Narwhale as it lurks in the Sargasso Sea. Dr. Choon, Poppy, and Charles Wong are on board the sub, “guests” of the US Navy, as they gather and harvest the Sargasso seaweed. The aqautic stuff we want from the series sporadically returns, like when Tiger gets in his special gear (a black “light metal helmet” and a black “neoprene wet suit [with] five zippers, but none in the right place”) and “fins” around the murky sea.

All the plot threads from the first half of the book awkwardly come together as Charles Wong, on Narwhale, takes Capt. Greene captive, phoning his demands to Admiral Coffin on nearby sub Poseidon. Wong we’ll learn is a double agent, working for the “Chinese Commies” and the Russians; Dr. Choon himself is aligned with the Chinese, his assignment to use US resources to perfect his protein manufacturing before delivering the whole thing to China on a silver platter.

But Choon has escaped – oh, and Charles has accidentally killed Poppy!! Stokes flashes back so that we readers can witness the poor nympho’s sad demise as Charles Wong bashes her head to pulp with the butt of his gun; as an extra twist of the knife Stokes even informs us that Poppy has fallen in love with Tiger and fantasizes about marrying him!

For the hell of it, Stokes then throws in a new subplot – Admiral Coffin tasks Tiger with killing a new Shark (ie a junior SUS frogman, Tiger being the only Tiger Shark). The guy has the convenient name Battenkil and Coffin’s just learned he’s a Russian secret agent. Tiger is assigned to kill the spy while the two men speed in KRAB after the Cuban fishing boat Dr. Choon has escaped on, which is taking him to Havana. Now we’re getting to the material we want as Tiger, in his “special wet suit,” which has “thousands of tiny suction cups” on it, affixes himself to the bottom of the Cuban boat as it speeds through the waters and slowly pulls himself aboard, ready to kill some Chinese Commies and capture Dr. Choon.

But Choon’s already friggin’ dead!! Once again Stokes builds up a plot and dispenses with it off-page; Choon, miserable over how he had a chance to save Poppy but instead ran for his life, shoots himself in the heart with a Luger(!?) and dies as Tiger watches. The Cuban sailors proving to be pretty damn easygoing, Tiger then takes the corpse, gives it a sea burial, and returns to KRAB. Meanwhile Charles Wong has gotten onboard a Russian sub, and it’s now angling to shoot a torpedo at the Narwhale, just as Coffin suspected. Tiger’s mission is to destroy the Russian sub, and kill fellow Shark Battenkil.

The final dozen or so pages are gripping and entertaining and damn if only the rest of the book was the same. It culminates with Tiger and Battenkil in desperate battle beneath the waves, and then a trio of Russian frogmen come after Tiger. Our hero once again doesn’t get to use his “Sea Pistol,” that bizarre weapon introduced in the first volume but not used since then (I think); this time it’s knocked out of his hand before he can fire. The fight with the Russian frogmen is especialy gripping because Tiger has planted a bomb on their sub and he has to keep them from seeing it – plus Battenkil managed to cut Tiger’s oxygen supply, so there’s an extra layer of desperation as Tiger frantically swims for KRAB before he runs out of air – and before the Russian sub blows.

Ponderous and slow-moving, more focused on mystery and suspense than Cold War aquatic thrills, Sargasso Secret is really only enjoyable for fans of the series or fans of Stokes’s work. I’ve found with this particular series to not hope for any action or lurid thrills or whatever – or if so, only hope for it in small doses – and instead just appreciate it for what it was: a skilled and capable author winging it as he bangs out his latest contract assignment.
Posted by Joe Kenney at 6:30 AM

just started reading the series. love all kinds of action adenture fiction including those including frogmen and diving. thanks for the reviews.

Thanks for the comment, Jim, hope you enjoy the series. It generally takes a while to get to the frogman stuff, but once it does it's pretty cool. If you are into frogman fiction, I have a review for a book coming up next Monday that you might be interested in. The Nick Carter novels "The Sea Trap" and "The Samurai Kill" are also worth checking out.