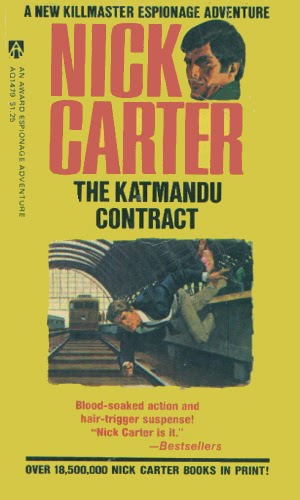 By this point in the Nick Carter: Killmaster saga, series creator/producer Lyle Kenyon Engel was gone, and the books were solely in the hands of publisher Award Books. Rather than a small stable of authors who turned out a guided series, Nick Carter: Killmaster was now farmed out to an ever-changing lineup of freelance authors, and any sense of a continuing storyline was gone.

One of these new authors was James Fritzhand, who wrote a total of three volumes between 1974 and 1976. Fritzhand was a “literary” author, his first publication being a Pynchonesque tome titled Son Of The Great American Novel, which was released with much fanfare in 1971 and apparently was a major bomb, not even scoring a paperback edition until 1978. (I have it and tried reading it, but just wasn’t feeling it.) Soon afterwards Fritzhand began publishing trashy Hollywood-themed paperbacks, eventually becoming a writer on TV shows like Hotel and Falcon Crest.

But before that he wrote his little trilogy of Killmaster novels. One of the interesting things about this series is that you can excise installments written by the various authors, for what in essence amounts to mini-series within the main series itself. What I’m trying to say is, if The Katmandu Contract is any indication, then Fritzhand’s contributions really do read like a trilogy, as throughout this book he constantly refers back to his previous installment.

Anyway, I once again have Zwolf to thank, as his review really had me wanting to read this book. I found The Katmandu Contract a little more “suspense-thriller” heavy than Zwolf did, though he’s got a definite point that Nick Carter’s taken to Sonny Chiba proportions here; he’s such a martial arts wizard that he can tear people apart with his bare hands. But while the fighting is frequent and well described (if a little too heavy on the technical terminology), for the most part the book is more in the vein of a standard sort of Cold War thriller.

The martial arts feel comes though from the start, as Carter takes us through a few rounds with his all-important (yet likely never before mentioned) Korean karate instructor, Master Chin, who is so floored with Nick’s abilities that he’s dubbed him “The Fist.” From his sparring session Carter’s briefed by boss David Hawk on his latest mission – he’s to find whoever abducted the teen children of Senator Chuck Caulfield, a personal friend of Hawk’s.

Actually, Carter’s to both rescue the kids and kill the abductors. All that’s known is that they’re a terrorist organization calling themselves Sherpa, and they operate out of Nepal, their goal to oust the current rulers. They want a billion dollars worth of uncut diamonds in return for the kids. (Amusingly enough, the actual ransom note only specifies “million,” yet throughout the novel everyone keeps saying “billion.”)

Here the spy thriller stuff commences, as rather than flying to Nepal and unleashing hell, Carter instead flies to Amsterdam to go about turning a billion dollars of AXE funds into uncut diamonds. Also, he’s to do all of this on the hush-hush, as it’s to be kept ultra-secret. He’ll even have to smuggle the diamonds into Nepal. Not that any of this keeps Carter from picking up a hot babe on the flight – Andrea Yuen, an American grad student on her way to Holland for research.

Instead she ends up in bed with Carter, though Fritzhand doesn’t provide any details, other than a goofy bit where Carter informs us that he “buries” his face between her legs. Andrea will prove to be Carter’s only conquest in the novel, another departure from earlier volumes. And also Carter’s a bit more unhinged this time, suspecting Andrea might be an enemy agent, even though he himself picked her up on the plane – even barging in on her aisle while she sat there minding her own business, reading a book!

But when Andrea’s shot by a sniper, obviously she’s cleared by the suddenly-paranoid Killmaster, and off he goes through the streets and canals of Amsterdam in pursuit. This is an endless chase scene which introduces Kunwar, who for the most part is the villain of the piece – a hulking Nepalese karate master who has filed his teeth vampire style. Rather than being the comic book-like villain I expected, Kunwar is instead one of those types given to grand, polite speeches in between the bloody fistfights.

Also this sequence introduces the recurring motif of Kunwar getting away each time Carter goes after him. But meanwhile Carter’s hands are busy with smuggling the diamonds – which he’s gotten from an Amsterdam fence – out of the country, while both evading a suspicious cop and also keeping up on Andrea’s progress at the hospital. Once again the Killmaster has practically fallen in love with a gal, and there are many scenes where he keeps phoning or visiting the hospital, desperate to know if a still-comatose Andrea will survive her surgery.

After another action sequence, which sees Carter’s taxi flying into the Amsterdam canals, our hero takes off for Kabul, Afghanistan. Andrea’s still comatose, her big surgery coming up, but Carter has a timetable. And besides he’s more concerned with informing us of how uncomfortable his stomach feels. After a lot of deliberation we learn that it’s because he’s swallowed a bag which contains the jewels; the bag is secured to a fishing line which is anchored to a hidden compartment in one of Carter’s teeth!

Promptly upon arrival in Kabul Carter is again waylaid by Kunwar, and Fritzhand has built up a nice revenge angle here, as Carter’s just raring to kill the dude. At great length he does, and meanwhile he starts to figure that Kunwar was really working for Prince Bal Narayan of Nepal, rather than the Sherpa terrorists. Fritzhand develops a convoluted storyline in which Narayan, who is ostensibly a member of Sherpa, is secretly working against them, looking to score the diamonds for himself.

We get a taste of a long-gone era as Carter hangs out in the Cabin restaurant, Nepal, which is frequented by hippies and stoners – Carter is especially taken aback by their strange, drug-world lingo, in particular the line “Ripped to the tits.” Here he meets his Sherpa contacts, and they appear to just be college-aged Nepalese radicals. Their leader is even better: Kanti, the gorgeous, 35 year-old “spirit” of the organization.

Fritzhand shocks the expectations of veteran readers of the Killmaster series by not writing a sex scene between Carter and the lady, even though he constantly reminds us of how gorgeous and busty she is. Instead, the two trade verbal barbs, before eventually getting into yet another kung-fu fight; Kanti is a regular Angela Mao, and practially beats the shit out of Carter.

All this is after Carter has exchanged the diamonds for the kids – and speaking of almost-sex scenes, Fritzhand also toys with the reader a bit by having Carter inform us how attractive Senator Caulfield’s teenaged daughter is. I’m sure he did this on purpose, having fun with the genre expectations, making the reader wonder if he’d really go all the way with it. But after depositing the kids on a flight back to the US, Carter heads back to Sherpa HQ, hidden in the caves of Nepal, to both reclaim the diamonds and kill the abductors.

Instead he’s caught, his ass kicked by Shanti, and Lu Tien, the Red China military adviser on the scene, insists that this captured man is none other than the infamous N3 of AXE. But we’re in the homestretch, and after a quick escape and hasty battle, Carter disposes of the Red Chinese, Shanti, and the rest of Sherpa in one of the more anticlimactic finales I’ve yet read, just throwing a bunch of grenades at them. He then takes the time to finish of Prince Narayan before reclaiming the jewels.

And we’ll all breath a sigh of relief to know that Andrea Yuen, back in Amsterdam, has made a complete recovery – per series regulations Carter lets us know the two will be taking a nice long vacation together. Meanwhile he’d be back the following month, in another installment by another author, but Fritzhand wouldn’t return until the following year, with The List, which would be his final contribution to the series.

Overall I found The Katmandu Contract mostly enjoyable, and I liked the badass Killmaster we got in the martial arts scenes, but overall I felt this one was too much in the vein of the later installments of the series, ie ones like Blood Raid, which went for “realism.” But Fritzhand’s writing is good, if too literary for the genre; there’s a lot of fancy word-spinning, metaphors, and analogies getting in the way of the violence (which is minimally described) and the sex (which is not described).
Posted by Joe Kenney at 6:30 AM

Another excellent review! :) Yep, I liked this one pretty well... it kept things fairly realistic but didn't skimp on the slam-bang too much.

I just finished reading a somewhat-Nick-Carter-related book... the first Blood book, by Allan Morgan, which Award touted as "by the people who brought you Nick Carter." It was kind of similar, but a lot more mundane. Not terrible, but I won't be in a rush to read the next two volumes...

Thanks for the comment, Zwolf, glad you enjoyed the review. Glad to hear something about the Blood series...the only one I have is the third volume, which I myself haven't been in a rush to read, mostly due to the first-person narration, which annoys me.

Btw, does this mean another action-novel review roundup will be coming up on your blog?

I read this one back then and have forgotten all about it except the part with the diamond smuggling. I thought this so absolutly ridiculous, never forgot this. Only a hopefully acid resistant line or a good jab away from a painful death. And this was long before the concept of a mule became popular. N3 sure was fearless.

It's going to be a while before I get another blog post done... I still have computer problems I'm horribly lazy about ironing out, plus I've slowed down on reading lately (been reading short stories a lot and those are less review-able). Whenever I get the computer/network fixed I'll probably put up a nonfiction-books post, 'cuz I have a lot of those backlogged (mostly motorcycle gang books and autobiographies of other violent people like Chuck Zito or Paul D'Anno -- for some reason I've piled up a lot of reviews of those!)