The Executioners (aka Nick Carter: Killmaster #55) 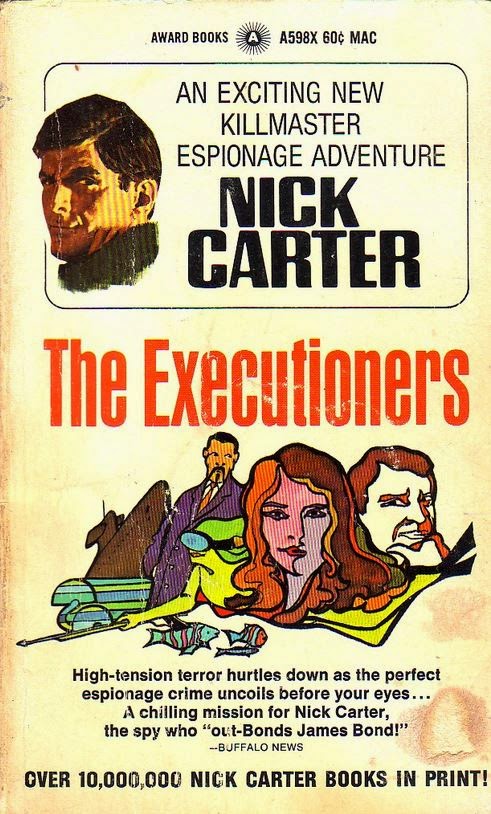 The Executioners, by Nick Carter
No month stated, 1970  Award Books

Not as entertaining, crazy, or sick as his earlier installment, The Sea Trap, The Executioners is only a middling entry in the Nick Carter: Killmaster series, courtesy Jon Messmann. Also worth noting is that, unlike that earlier volume, this one is in first-person, which already results in a demerit so far as I’m concerned.

And given that first-person narration, The Executioners lacks the setup of the earlier volumes that were in third; it opens with Nick Carter already en route to Australia and on his latest case. The setup is clunkily rendered via Carter’s expository flashbacks to files he read in boss David Hawk’s office on Dupont Circle in Washington, DC. Long story short, the Australians have been fucking up recently, and three separate accidents during military training have resulted in lots of death, destruction, and loss of money.

The US military took part in these training exercises, and since America too has suffered loss AXE has been called in to investigate. Worth noting is that these three accidents are stated as taking place over the summer of 1969, with the latest one occurring in September. Thus, the novel takes place in September, 1969; it appears that these early volumes of the series were pretty constant in locking it all down in a specific place and time. The side effect though is that Nick “Killmaster” Carter comes off as one busy dude.

Carter hooks up with Australian intelligence, which is located near a small city named Townsville. The affable commander in charge tells Carter that his main intelligence contact will be – you guessed it – a super hot and super stacked redhead named Mona Star, who promptly makes her interest in Carter obvious. Surprisingly, Carter has not gotten laid yet, even though we’re already around 20 pages in. All joking aside, there’s actually less sex afoot here than typical, so far as the series goes, and the lurid factor of The Sea Trap is completely missing.

With Mona’s assistance, Carter researches the military training exercise mishaps. They span the three branches of the Australian military: the army, the air force, and the navy. In each case a disaffected soldier was at fault, and officially it’s been marked down as human error. However AXE suspects sabotage, and a grander, darker scheme at play; AXE has named this mysterious threat “The Executioners,” which ultimately has zilch to do with the plot and is likely the title Award Books came up with; book producer Lyle Kenyon Engel complained that the publisher often changed the titles of the books, usually without even informing him.

Dawsey, who crashed a tank, has been discharged from the army since, but Carter discovers that the guy appears to be rather affluent. Carter barges in and outright accuses him of being a traitor in exchange for cash, and then tails Dawsey to a bar called the Ruddy Jug. There he sees Dawsey talking to an attractive but downbeaten waitress. But then the waitress has Carter kicked out of the bar, after which he’s jumped by three guys at Dawsey’s house and taken away.

This is just the first of several instances in which “the Killmaster” is caught in The Executioners. This time he’s taken to a smelting plant, where he escapes in one of the most unbelievable sequences ever; I mean, the thugs actually leave Carter’s Luger in his pocket so it too will be smelted and destroyed! Uh, all Carter has to do is jump away…and then shoot them with his Luger. I’ve never seen such a brazen disregard for genre tropes.

Carter kills these guys, discovers Dawsey’s corpse back at his house, and heads back for the Ruddy Jug to confront the waitress who ratted him out. This is Judy, who might not be as bad as she seems; she’s merely paid to point out disaffected servicemen to a “concerned group” of Australian men who claim they’ll help these soldiers. Otherwise she professes no knowledge of the sabotage acts or Dawsey’s murder, etc. Plus she’s got these awesome breasts and Carter just wants to believe she’s innocent.

Speaking of tits, Carter’s oggling them throughout the novel, like a regular Nick Merlotti. In what has to be some intentional humor, the women’s breasts are always mentioned in every single scene, beyond even the genre norm. I’m not complaining, just noting. Anyway, Carter is next almost killed by Dempster, the air force pilot who was involved with another of the “accidents.” Once again coming off like a fool, Carter just hops in a plane with this guy…and Dempster jettisons him right over the outback!

We get a long sequence of survivalist fiction as Carter somehow makes it through the unforgiving elements; a sequence which sees him saved by a group of aborigines. But he recuperates enough to eventually get back to Mona Star’s place outside Townsville – I forgot to mention, but the two are now an item, Mona being the first (and only) woman Carter scores with in the novel, in a sex scene that isn’t nearly as explicit as anything in Messmann’s earlier The Sea Trap. I thought these kinds of books got more explicit and graphic as the ‘60s became the ‘70s, but this particular novel would prove that’s not always true.

There is though lots of sensationalistic stuff as Carter uses his male mystique to woo Lynn, Dawsey’s ex-girlfriend, a man-starved woman who too has “full breasts” which Carter enjoys oggling. While he never has “full-blown sex” with her, Carter gets pretty hot and heavy with the lady, using her obvious interest in him to figure out if she knows more about the plot than she admits; in a goofy bit of coincidence, Messmann has it that all three women are somehow involved with whoever is planning the sabotage, but only one of them is intentionally so.

“The Executioners” operate out of a ranch outside of Townsville, and there follows another sequence where Carter is again captured, and the dumbasses toss him into the lot with a bunch of maddened steer…leaving Carter with his stiletto! Of course, he’s able to escape, and frustrated by the whole mystery he then tells everyone he’s leaving and doubles back in disguise as a disaffected Australian worker, who has signed on to build the new dam which is being overseen by an American engineering company, much to the chagrin of the locals.

Long story short, a disguised Carter is soon introduced to the saboteurs thanks to Judy, who doesn’t know it’s really Carter. And when Carter demands to meet “the head man,” he’s nonplussed to discover it’s actually…Mona Star! Messmann has already planted a few kernels so this isn’t a total surprise, but still, it’s revealed so late in the tale that it comes off as anticlimactic. And what’s worse is the pulp stuff really comes out here, in the veritable homestretch of the tale.

For you see, Mona and her compatriots are headquartered in an underwater lair built into the Great Barrier Reef! Carter scuba-dives down to find it…and is promptly captured yet again. Here a bikini-clad Mona informs Carter that her real name is Caroline Cheng; she’s an Australian who grew up in China, and after her father was drummed out of the Australian military for demanding equality among all ethnicities, she decided to get vengeance, especially now that equality is the accepted norm.

So, she married Colonel Cheng of China’s intelligence outfit, and demanded he let her plan this whole “executioners” gambit. But, just as in The Sea Trap, Carter’s already called in an underwater strike on the location, so there follows a tension-filled climax in which they’re all caught in the cramped underwater headquarters while a US Navy destroyer launches missiles at the place.

Also, Carter goes easy on this female villain; when Mona is trapped by a giant clam along the reef (the claim itself another callback to that earlier Messmann installment), he gets her free and then pulls her to safety. But the “Oriental” side of her nature demands death before dishonor…and she intentionally swims into a pack of blood-crazed sharks! Meanwhile Carter’s looking forward to boffing Judy the bartender a whole bunch back in the States, as he’s arranged via Hawk to get her an extended visa…

While it wasn’t fantastic by any means, and kind of repetitive throughout, The Executioners wasn’t a terrible installment of the series. This is mostly because Messmann keeps things moving throughout. One interesting thing to note is that the tone is very different from The Sea Trap, likely another repercussion of the unfortunate series switch to first person.
Posted by Joe Kenney at 6:30 AM

I actually have a copy of this one which I've never gotten around to reading. And it's set in Australia? I guess as an Australian I really should give it a read.