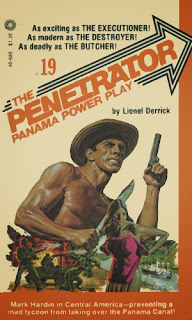 Whereas his previous volume of The Penetrator was almost surreal in its focus on action, this time out Mark Roberts attempts to go for more of a plot-heavy approach. It doesn’t always succeed, though, making Panama Power Play come off as a bit padded at times, very much lacking the spark of Demented Empire.

Roberts continues to dole out the metaphysical stuff with an opening which sees Mark “Penetrator” Hardin engaging in some past-life regression with his Indian mentor, David Red Eagle. This entire sequence seems lifted from a Western novel Roberts might’ve been working on at the time, with cowboys taking out Hardin’s Indian tribe. It kind of goes on for a while, too. Finally though Hardin emerges from the trip with the understanding that he should not hate his enemies, and instead look upon his vigilante activities moreso from a “maintaining the karmic balance” sort of view. I mean, he’s still supposed to kill them, just not hate them!

From this we clunkily go into the volume’s threat – one Norbert Briscoe, a tycoon who has escaped America, where he’s wanted on various white-collar charges. Now living in Costa Rica, Briscoe plans to take over the Panama Canal, funding a group of soldiers for the job. His objective is to then extort the US and other countries to use the Canal, but unbeknownst to him the commanders of his mercenary army are in fact communists and are secretly working with Cuba. Briscoe is an unlikely villain for the series, but Hardin takes the job because he’s bullied into it by Dan Griggs, a Federal agent who has helped Hardin in the past.

Hardin flies down to Costa Rica on his personal plane, and here again we have arbitrary bits in the text where Roberts informs us how pilots handle small aircraft in rough weather and whatnot. Was the guy a pilot or something on the side? Anyway Hardin’s shaky plan is to pose as Manny Czonka, Norbert Briscoe’s childhood friend; the two haven’t seen each other in decades, and Hardin hopes that Briscoe will have forgotten what Manny looked like. Czonka has gone on to become a left-leaning labor union rep, giving Roberts many opportunities to bash liberals and commies.

Unbelievably enough, Briscoe not only buys that Hardin is his childhood pal, but he immediately tries to recruit him into his Panama Canal scheme! This develops over a very long sequence in which Hardin as Czonka hobknobs with the expatriot jetset at a party on Briscoe’s estate in Costa Rica. We get lots of scenes in which Briscoe’s financial advisors bicker with one another over the Canal plan; they are immediately distrustful of Hardin, as is “The Colonel,” Briscoe’s security chief who is secretly working with the Cubans. In fact for a “financial wizard” Norbert Briscoe comes off like an idiot in Panama Power Play, constantly being fooled by those around him.

Action is sporadic for the first half of the novel, other that is than a completely superfluous scene where, before heading down to Costa Rica, Hardin heads up to Briscoe’s old home turf in Chicago and gets in an arbitrary fight with a pair of cronies who attack him. Needless to say, this incident has no bearing on anything and is never again mentioned. But I guess this would be like complaining about a “superfluous” sex scene in a porn flick. Anyway there’s very little action for the first several chapters of the novel, again marking it from its predecessor.

When the Colonel’s goons pull a hit on Hardin, he finally decides to kick things into gear. Once again hopping into his plane he flies on down to Panama to scout out the location. Here we have another strangely arbitrary scene where, on the main street of some village in Panama, Hardin just happens to run into two old army pals from back in his Vietnam days! These guys, who immediately thereafter disappear from the novel, serve as backstory-expositors, telling Hardin, whom they suspect is now CIA, how the army has gotten word that something strange is going on in the area.

Hardin forages into the jungle and finds a battalion of Cuban soldiers have already secretly encamped. Posing as a local he gets onto the base, but is immediately discovered. There follows a sequence torn from a war novel in which Hardin commandeers a radio and calls in the Panamanian army; troops descend upon the encampment and a smallscalle war ensues. The Penetrator literally disappears throughout this sequence, as we read about random Cuban or Panamanian soldiers blowing each other apart.

When Hardin returns to the narrative he’s busy trying to escape the surviving Cubans, who are still after the imposter who snuck into their camp, despite the apocalyptic battle they just lost. Hardin gets shot in the leg and falls off a cliff, right into a river; he wakes up to see a beautiful young Indian woman looking down at him. This is Rainbow Child, and the next sequence of the novel sees Hardin staying with the natives in their village as he recovers from his wound.

Rainbow Child is of course “given” to Hardin by the chief, though we learn that the girl wanted Hardin anyway. Strangely though Roberts doesn’t make much of the eventual sex scene, with Hardin instead biding his time until he recovers, so that he can finally thwart Briscoe’s Canal plan from occurring – despite the Cubans having been rousted, Hardin knows that Briscoe’s underlings are turncoats and no doubt still have something in mind for the Canal. Only when Rainbow Child complains that Hardin hasn’t slept with her does Roberts deliver the expected scene – but he skips right over it, which is also strange. I was hoping for a Soldier For Hire-style purple-prosed sex scene.

Speaking of sex, as soon as Hardin manages to get back to Costa Rica he finds Joanna Tabler waiting for him in his hotel room. Joanna is Hardin’s girlfriend in all but name, and this is one of the few Roberts Penetrator novels she’s appeared in. Sent down here by her boss Dan Griggs to pose as the girlfriend of “Manny Czonka,” Joanna does absolutely nothing to help Hardin – that is, other than immediately get abducted by the Colonel’s men!

In a sequence that seems to come right out of a sweat mag, Roberts has the Colonel’s stooges torture Joanna in horrible fashion. She’s stripped, burned, beaten (until the point where she pukes), and even violated by the Colonel’s rough fingers. It’s all pretty unsettling and seems to come out of nowhere, but it all culminates in a nice bit where Hardin magically shows up and blows everyone away – just in the nick of time to prevent Joanna from swallowing her cyanide pill.

From here Panama Power Play stalls into the home stretch as Hardin and Joanna turn into veritable pranksters as they try to fool Norbert Briscoe into believing his life is at stake. Their goal is to get him to willingly leaving the country, taking advantage of his “old pal” Manny Czonka’s private plane. At length the ruse works, and after drugging up Briscoe Hardin turns the plane from the Briscoe-intended destination of Cuba and back to the US, where Hardin delivers Briscoe into the hands of Dan Griggs. And by novel’s end, of course, Joanna has sufficiently recovered enough to want a little play time with the, uh, Penetrator.

I guess on second thought Panama Power Play was in fact just as discombobulated as the previous Roberts installment, jumping at random from one subplot to another, but still it lacked the nutzoid spark of other Roberts offerings, not to mention the gore and sex factor. Also on a pedantic note, the nifty little submachine gun Hardin had made at the end of Demented Empire is revealed this time out as being an American 180, which doesn’t look nearly as cool as Roberts described it.
Posted by Joe Kenney at 6:30 AM