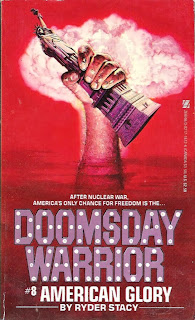 Picking up two weeks after the previous volume, American Glory is mostly a return to form for the Doomsday Warrior series. Rockson and team are still on their journey back to Century City in Colorado, after having rescued President Langford and his daughter Kim from the clutches of Killov in Washington, DC.

As usual though for me the biggest draw is the soap opera antics of Rockson and his two lady loves, Kim and Rona Wallender. As promised at the end of #7: American Defiance, this volume sees the at-long-last meeting of these two women, and the authors (well, author it seems, more of which below) turn this into a booklong cat fight. Nothing as ferocious as the one seen in Jason Striker #2, though; the women instead taunt one another, and Ryder Stacy of course plays up the laughs.

Before that though we must have the series-mandatory opening sequence in which Rockson and pals are almost eaten by some post-nuke mutant monstrosity. This time it’s a veritable Garden of Eden which Kim insists the group check out as they pass by it. Of course the beautiful plants soon turn horrifying as the petals become slavering jaws and the foliage attacks, the Rock Squad blowing it away with heavy weaponry. And the sequence of course ends with the also-mandatory description of how a Freefighter corpse is digested by a mutant monster.

But when the party finally arrives at Century City the soap opera fun begins. Here Rona and Kim meet at long last, and it’s instant hate. Throughout the rest of the book they trade insults, picking at one another’s defenses. Ryder Stacy really plays up on the difference between the two, comparing and contrasting the petite, 5’ 2” blue-eyed and blonde-haired Kim with her “small breasts” to Rona, who stands at 5’ 10” and 140 pounds, with her flaming red hair and “statuesque” build (we also learn that Rona wears a “form-fitting spandex bodysuit” to further show off her curves). Whereas Kim tries to act more masculine to offset her “girly” apperance, Rona goes the opposite route, doing overly “girly” things to offset her larger build, which we further learn she’s embarrassed of, suspecting that men in general are more attracted to dainty women.

Stacy for his part seems to be on Rona’s side, as Kim comes off as pretty annoying this time out. In fact I’ve never much cared for the character and hope the author(s) get around to removing her from the series. Rockson however doesn’t do anything about the situation, content to let the two women bicker from the beginning of the novel to the end. So then Rockson himself doesn’t come off very well here; I expected him to at least step in and do something about the increasing volatility of the Rona/Kim situation, but instead the “Ultimate American” just buries his head in the sand like the veritable ostrich.

The plots for each volume rarely vary, and American Glory is no exception – once again Rockson must rally the forces of Century City against Killov, who per the previous volume has taken over much of the US, having vanquished the forces of President Zhabnov. The leaders of Century City and Rath, chief of intelligence, know that this is bad news, as it’s only a matter of time before Killov, who is dedicated to death and destruction, gets hold of the hidden Russian stockpiles of nuclear missiles in the US.

The opening chapters are a bit trying; after a lengthy sequence in which the leaders of Century City debate over what to do about Killov and finally agree upon launching “K-Day,” ie the unification of all Freefighting cities against Killov’s forces on a specific day, we move on to a completely superfluous page-filler of a scene about a Pony Express rider carrying K-Day summons to one of the hidden Freefighting cities. Then when we cut back to Century City a few weeks later, we get yet another lengthy sequence in which the leaders again debate over K-Day, voicing pretty much the same opinions as in the previous scene!

But when the Rock Squad finally hits the road things pick up. Killov has sequestered himself in Fort Minsk, one of the top “Red” fortresses which has now been overtaken by the KGB. The Century City force will lead the attack on this installation, but first Rockson must play out his plan – namely, to contact Premiere Vassily in Moscow and ask him to contribute forces to the cause. Rockson’s reasoning is that since the Americans are fighting to free the Red forces from the KGB (with the idea that they are the lesser of two evils), then the least Vassily can do is help out.

After speaking to Rockson on a transatlantic radio patch, Vassily agrees to send troops; this turns out to be the Royal Sikh Army of India, a mercenary force who has never been defeated. Lead by Generals Ragnar and Panchali, the Sikhs are flown over to America, while Rockson et al continue on their way to Fort Minsk. Here the novel plays out in its customary fashion, with the group of Freefighters ecountering all sorts of obstacles in their path, from radioactive lava-spouting volcanos to a tribe of Sioux Indians who abduct them and challenge Rockson to mortal combat with their ten greatest fighters.

When Rockson’s team finally meets up with Panchali and Ragdar, who of course head up the legion that’s been sent to help invade Fort Minsk, the two Sikhs take the spotlight from recurring characters like Chen, Detroit, and even Rona and Kim. Instead the last quarter of the novel plays out like Rockson and his two Sikh pals, as first he gets drunk with them and then finally co-leads the assault on Fort Minsk with them. The other characters are lost in the shuffle – we don’t even get to see how Rona and Kim fare in battle, as they too are skirted unceremoniously from the narrative, though we do at least get to see that they come to a temporary truce on the morning of K-Day.

Even the finale plays out the same, with Rockson and Panchali racing into Fort Minsk for a showdown with Killov. Here we get a very comic bookish scene where Killov surprises the pair with shotgun barrells that pop out of hidden compartments in his desk! The KGB leader then makes an escape in a battle pod that Darth Vader would be envious of. But once again Rockson and the Freefighters are victorious, turning the forts back over to the Red army, even though as usual they’ve suffered a few (non-recurring character) losses.

According to this site, it appears that Ryder Syvertsen and Jan Stacy only collaborated for the first four volumes of Doomsday Warrior, after which Syvertsen handled the writing duties alone. So then this means I was wrong; I’d assumed Stacy wrote the clunky action stuff and Syvertsen the New Agey psychedelic stuff, when if fact it turns out to have been the opposite. And while the action in American Glory is as goofy as ever, Syvertsen here increases the gore factor (or at least brings it back), with lots of descriptions of faces getting blown off and characters blowing up in showers of blood and guts.

But in hindsight it’s clear that Stacy left after #4: Bloody America, as the metaphysical stuff dropped off for the most part after that volume – though luckily with this volume Syvertsen appears to be bringing it back, as there are two psychedlic sequences, one with Rockson in telepathic communion with the Glowers (who tell him they are too weak to aid him in battle anymore) and another with a drug-fueled Killov astrally voyaging into the black heart of space. One thing that is missing this time is the obligatory sex scene – given that Kim and Rona both travel with Rockson to keep each other away from him, this means that for once the Doomsday Warrior fails to score!
Posted by Joe Kenney at 6:30 AM