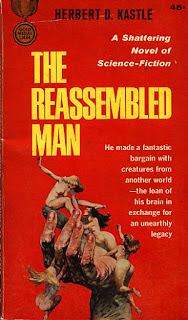 In fact, you could consider The Reassembled Man the story of how a regular loser becomes an alpha male, Harold Robbins-type protagonist. Our “hero” is Ed Berner, a 38 year-old sap who has been beaten down by life. Married to a shrew, the father of two prepubescent kids, Ed makes a moderate living as a copywriter at a Manhattan ad agency. Yep, just like Darrin on Bewitched -- and really, this novel is very much like a twisted episode of Bewitched. Like, if Darrin had asked Sam to make him ultra-human, and then decided to start sleeping around with every woman he met.

Kastle doesn’t make us spend too long with the loser version of Ed. This in fact might be one of the novel’s failings; Ed’s later actions come off as so self-centered that the book quickly descends into an endless string of softcore sexcapades, Ed living out the dreams previously denied him. But at any rate, as the novel opens Ed goes out for an evening drive, and comes to days later, having driven all the way from New York to New Mexico.

He’s been brought here by the Druggish, aliens who apparently look like Japanese Beetles, only human sized. Kastle well captures the purported experiences of UFO abductees, with Ed coming to himself as he sits in his parked car overtop a hole in the New Mexico desert, out of which pops these giant beetles; the ensuing dialog with the aliens occurs with a sort of casual-meets-bizarre vibe.

The aliens (who initially speak in beatnik, having assumed it was the standard Earth language from their research) inform Ed that he’s been chosen to be their “recorder” of life on Earth. They wanted an average guy living an average life, and Ed fit the bill. In exchange they will grant him his wishes; anything Ed has previously longed for will be given him.

Ed emerges from this a superman, very similar to Tony Twin, from TNT. Kastle loses me here, though, because the Druggish make it clear that they want Ed to be an “average” human, and though they say they can only boost his inherent potential (in other words, they can’t make him fly or anything, because humans can’t fly), Ed still comes out of this a not-very-human being, able to read and influence thoughts and capable of superhuman feats, from lifting cars with one hand to breaking long-jump records with ease.

The Druggish have removed themselves from Ed’s memory – something they’d told him they’d do, so as to assure an unbiased report from him – so he comes back to himself in this new and improved body here in New Mexico with no idea how he got here. Pretty soon Ed gets to take his new body out for a spin with all the expected tropes; he nearly beats to death a pair of would-be robbers and quickly talks an attractive waitress into leaving work and going to his hotel room for some sex!

This first sex scene is just a taste of what the novel will become, just an endless string of sequences where Ed will meet some girl, affect her thoughts with his own so that she’s overcome with lust for him, and then take her to his place where he will bang her for several hours. Again just like Tony Twin, Ed is insastiable and can last for hours and hours, wearing out women until they’re in a stupor of ecstasy. He also apparently has a sadomasochistic bent, and Kastle hints at “experiments” Ed will put various women through. De Sade is even mentioned. But again due to the era it was published, the novel does not get into details.

Ed quickly discovers he can control others. He takes care of his previously-domineering wife, satisfying her with Herculean bouts of sex to the point where she’s in a daze. Meanwhile Ed sets his sights on Gladys, the attractive next-door neighbor with the loutish husband. This scenario is given the most setup of all of Ed’s conquests, as he goes to great lengths to get the couple over to his place for some barbecue and brandy, ensuring that Ed’s wife and Gladys’s husband pass out so Ed and Gladys can be alone.

His new powers also give Ed an advantage in the workplace. Whereas before he was a nonentity, by the end of his first week Ed has gotten his old boss fired and has taken over the department. This is very Bewitched/Mad Men as Ed hobknobs with wealthy clients and attempts to win over their accounts. But Ed discovers one strange drawback to his new condition – he can no longer handle booze; just the thought of drinking it is enough to make him puke. Which makes it pretty unfortunate that his agency mostly deals with licquor accounts!

Another thing Ed learns is that he quickly becomes sick of women once he’s conquered them. Again, the novel is very repetitive with Ed going from one woman to another, and you’re left with the unpleasant thought that the majority of these women are sleeping with him because Ed has influenced their thoughts. Once Gladys has been moved to the background, the biggest romance in Ed’s new life is Beth, a pretty 18 year-old heiress who is much wiser than her years would imply; after one night with Ed she calls to tell him that, while she likes him, she has a feeling she’s been used somehow. Beth is easily the strongest female character in the novel, and Ed soon becomes self-conscious around her, as she’s the only one who appears able to detect that there’s something different about him.

Meanwhile Ed discovers a much bigger problem with being a recorder for the Druggish. Right before landing a huge account, Ed loses his mind, steals a car, and comes to days later in New Mexico. Turns out his reports to the Druggish will be monthly; when the allotted time is up – which, remember, Ed will never know because the Druggish erase themselves from Ed’s memory – Ed will drop whatever he is doing, find the closest means of transportation, and get to New Mexico, where the Druggish will be waiting for him, all of it timed to their busy interplanetary-traveling schedule.

When reunited with the Druggish Ed remembers all – and instantly realizes that his life will have problems. What if he’s overseas when the monthly call comes to return to New Mexico? Since he’ll have no memory of the Druggish, he’ll blindly go on with his life, not realizing that once a month he’ll be expected to drop everything and get to New Mexico, where he’ll remain for days.

The Druggish give Ed more problems. Since their “recorder” is such valuable property, they instill deep fears in Ed of anything that might kill him; now he’s terrified to fly, and he can only drive his brand-new Triumph sportscar at 30 miles an hour due to his terror that he’ll crash it and die. And forget about taking on armed robbers or bullies anymore. But again, since the Druggish have wiped his memory, Ed has no idea why he’s so afraid of everything, just like he can’t understand how he got this new body and new skills.

But as mentioned, the novel by this point has fallen into a mire of repetitive situations. It’s salvaged though by Kastle’s masterful prose. Also, as would be expected he has more up his sleeve than delivering a wish-fulfillment fantasy. It doesn’t take long to realize that The Reassembled Man is really a morality play, the story of what happens when the male id is allowed to run rampant.

Ed Berner is not a hero, and Kastle doesn’t present him as one. Indeed you soon feel sorry for the other characters he manipulates and takes advantage of. But as the narrative moves on Ed begins to realize the errors of his ways, and also focuses on bettering himself – one advantage of his new form is that he requires little sleep, and so he spends many nights up reading the classics and philosophy.

Just as you realize it can’t go on much longer (sort of like this review), Kastle pulls out all the stops, delivering another of his dark comedy showpieces where Ed must drink a glass of fine brandy as part of the fulfillment of a new account – a scene that goes down with comically disastrous results. From here Kastle quickly wraps up his narrative, with some last-second changes of mind from the Druggish and a better future for Ed.

The Reassembled Man isn’t a masterpiece, but it’s enjoyable. Its biggest failing is that it starts off so strong, with a reborn Ed Berner living out every guy’s fantasy – getting the upper hand on bullies, telling his boss where to shove it, being desired by every woman he meets – but it soon falls into a rut.

Kastle must’ve realized some opportunities himself, as in 1975 he rewrote about 80% of the novel and published it as Edward Berner Is Alive Again!, a hardcover-only obscurity which I’ve just gotten via InterLibrary Loan. I look forward to seeing how different it is from its original incarnation.
Posted by Joe Kenney at 6:30 AM

I read this in 1964, and thought it was wonderful. I still have the book on my shelf, but have never read it since. I read all your posts. Thanks.

The druggish themselves point out how repetitive and pointless Ed's actions appear to them.
The book slides gradually from power fantasy to cautionary tale - still Ed gets away from his actions far too lightly for my tastes, let's not forget the explicit rape scene from which he walks away satisfied, considering it a new experience.