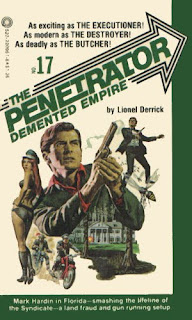 This volume of the Penetrator is all over the place, filled with carnage and lurid subplots, which is a little surprising given that it’s by Mark Roberts, who generally delivers the more “grounded” installments. In fact Demented Empire reads like one of the crazed installments churned out by Roberts’s co-author, Chet Cunningham…and given Roberts’s penchant for in-jokery as displayed in previous volumes, I wonder if this was his attempt at writing a Chet Cunningham-style Penetrator novel?

Whatever the case, Demented Empire is a lot of twisted fun, and probably my favorite Roberts volume yet. (Most likely because it’s like a Cunningham volume, given that I like the crazy stuff.) The plot’s just as wild as the action, starting off with Mark “Penetrator” Hardin in southern Florida, where he’s looking into a land fraud scheme…but then somehow he’s tracking up through the country hunting down a nascent crime ring, and by the novel’s end he’s gone down to Guatemala, where he stages a daunting raid on a kingpin who calls himself The Poet.

The plentiful action scenes are filled with gory deaths, starting off with Hardin’s attack on the land schemer’s headquarters. You’d figure it would just be a regular office, and it is, but it’s filled with goons, and Hardin mows them down. Here he comes upon a new submachine gun, apparently custom built by these guys, which Roberts expounds upon throughout the book. A wicked little .22 caliber-spitter, Hardin pries the gun from a corpse and uses it from there on out, blowing away scads of scum. I have to say, I’m no gun nut but this weapon sounded pretty cool, especially how Roberts described it.

The novel is almost surreal in how it comes off like a fractured series of barely-connected storylines, all tied together by Hardin as he comes into some new place, kills a few people, and moves on. To continue with the Cunningham parallels, it must be noted that Hardin is pretty savage here, moreso than normal in a Roberts installment. He shows absolutely no mercy to his enemies, no matter how low they are on the criminal empire’s totem pole. There’s one unsettling scene where he murders a crook while the man’s wife sits nearby, and at the climax he leaves another villain to suffer a horrible fate in the grip of an anaconda.

This turns out to be a lady named Nila Dennis, Malcom Stone’s secretary. Nila is a protype for the later Roberts villainess Margot Anstruther (from Soldier For Hire #8), and just as depraved, though unfortunately she doesn’t get as much narrative time as I’d like. (Due no doubt to some psychological quirk, I love female villains, the more depraved the better.) But here Roberts delivers on the scene he denied us in Soldier For Hire #8, having Hardin and Nila spend some quality time together. This scene is probably the highlight of the novel, with Nila so overwhelmed by Hardin’s skills in the sack that she forgets to call in Malcom Stone, who’s waiting outside for Nila’s signal to come in and kill Hardin!

Actually there’s a pretty strong focus on sex here, again moreso like what you’d expect to find in one of Cunningham’s Penetrator novels. Hardin gets it on with two different women, the first time with Nila Dennis and then later on with the beautiful proprietor of a hotel in Mexico…this scene is particularly Cunningham-esque, with the woman coming on to Hardin mere moments after meeting him, offering her Jeep in exchange for some good lovin’!

The sex scenes are just as purple prosed as you’d want, but more fun is how Roberts keeps reminding us of them throughout…both women continuously marvel over how good Hardin was, including an unforgettable bit where Nila, days after the event, reflects over “the warm glow in her loins.” Wow! I guess Hardin calls himself “The Penetrator” for more reasons than one. (Sorry, couldn’t resist…)

There’s enough material in Demented Empire for a few books, from Hardin’s entry into a knife-throwing competition(?), to an attack on Hardin by a group of bikers, to even the familiar old saw about the small-time sheriff who quickly figures out who Hardin is but decides to help him anyway. Not to mention a random scene where Roberts details how difficult it is to pilot a small plane through a heavy thunderstorm, nor a subplot where Hardin’s old pal Tony Rossi (from #12: Bloody Boston -- a Cunningham novel, by the way) tries to get Hardin to work for the Mafia! Even the last chapter of the novel is sort of arbitrary, with Roberts delving into full-on gun-porn as Hardin, back in his HQ, goes over what weapons he’s used on past missions and how each performed, and also designs his own machine gun for use in future missions.

So while it lacks much direction or control, I still think Demented Empire is one of the most entertaining entries in the series yet. Roberts is more focused on delivering a string of sex and violence-heavy scenes than on delivering a taut story, but when those scenes are so well done, who can complain? At any rate Demented Empire is leagues above the previous volume, which was by Cunningham…meaning that Roberts bested Cunningham by delivering a sort of imitation that’s better than the original.

Back in my review for #9: Dodge City Bombers, I wondered if Roberts’s mention of a character in Texas named “Crawford” might’ve been an in-joke reference to Texas-based Pinnacle house writer William Crawford, aka the man who penned the infamous 16th installment of the Executioner series, Sicilian Slaughter, as “Jim Peterson.” It must’ve been a reference to him after all, as Roberts actually dedicates Demented Empire to Crawford.
Posted by Joe Kenney at 6:30 AM

Have you read Executioner #16? I've read 1-15, so it's next on my list. I'm very curious to see how much different it is, and, of course, to know all the behind-the-scenes info about its creation.

Hey Marty, thanks for the comment. I have read Executioner #16, but it was back when I was a kid, so I really have no memory of it. I seem to recall Bolan shot himself up with morphine or heroin at one point, which seemed pretty odd.

I'm really looking forward to (re)reading Sicilian Slaughter, but it's going to take a while, as my next one will be volume #5. It could probably be read out of sequence though, because Pendleton himself claimed he never read #16, and the Sicilian Slaughter recap stuff that opens volume #17 was written by the series editor, Andy Ettinger -- so really it has nothing to do with the rest of Pendleton's run.

Do you ever give "spoilers" on this site (outside of the actual reviews)? I'm as fond of villainess characters as you are, so if I can't get the book, I'd really like to find out what happens to the "Nila" character.

Grant, since you asked I will let you know -- Nila is the character who is killed by the anaconda I mentioned in the review. It's a strange scene because Hardin debates whether he should save her or not, but then he's like "Screw it, she's evil," and leaves her to die!

It sounds mean, but I always like it to be more direct than that. Either that or a mixture of indirect AND direct, like what Bond does to the Fiona character in THUNDERBALL.