Where The Action Is (aka The All New Cherry Delight #4) 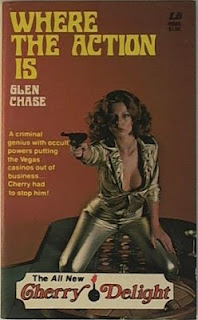 Where The Action Is, by Glen Chase
No month stated, 1977 Leisure Books

The vulgarities of this novel probably never will be matched in American Fiction. -- Leonard Levinson, in an interview with me in Paperback Fanatic #23

This is the first Cherry Delight novel I've read, and I only read it because Leonard Levinson wrote it. Cherry is a swinging, sexy spy, along the lines of the Baroness, but whereas that series plays it straight for the most part, Cherry Delight is a full-on satire/spoof/comedy. My understanding is that Gardner Fox created the character and wrote 24 novels as "Glen Chase," from 1972 through 1975. Leisure brought back the series as "The All New Cherry Delight" in 1977, publishing an additional (unnumbered) 5 volumes through 1978, keeping the Glen Chase house name. This was the only volume of the series Levinson wrote.

The All New series was different in that Cherry no longer just went up against rival spies; now she dealt in occult and horror-themed cases. Also, whereas in the original series she was an agent for NYMPHO, now she was an agent for DUE (Department of Unusual Events). It also seems that her original code name of "The Sexecutioner" was dropped as well. However the graphic sex was not dropped from the new series; again, like the Baroness, the Cherry Delight series was basically hardcore porn hiding in the guise of spy-fy. But whereas the Baroness was written in third-person (which I still found strange because it relayed the multiple sex scenes from the Baroness's point of view), the Cherry Delight novels are written in first-person, with Cherry relating her adventures, sexual and otherwise, directly to us.

Now, this I find really strange. I mean, we're talking here about a men's adventure series in which the protagonist tells us -- in great detail -- all about sucking on various parts of the male anatomy, screwing men, the works. But what do I know; there was a total of 29 books in this series, when you count both runs, so regardless it enjoyed an enduring popularity -- not to mention the outrageous prices some of these books currently go for. I have no idea how Fox handled the writing of the sex scenes in his installments, but Levinson does a great job, better even than Donald Moffitt in the Baroness books. Indeed, I enjoyed Where The Action Is more than the entirety of the Baroness series.

But again, the two series are wildly different, and Where The Action Is even differs from Levinson's other action series work. Despite being labeled and marketed as an "adventure" novel, Where The Action Is has more in common with The Last Buffoon than say Night of the Assassins. Levinson goes into detail about the writing of this novel in the above-mentioned interview, but long story short he was offered the job by editor Peter McCurtin, who showed him the already-completed cover photo, of a sexy gal in a silver jumpsuit posing on a gambling table. Fueled by "coffee and amphetimines," Levinson turned out his manuscript in a whopping six days.

Cherry's narrative voice is very similar to Alexander Frapkin's in The Last Buffoon: the same cynical sense of humor mixed with a wide-eyed joy for life. You have to consider Where The Action Is as a comedy, because it fails as an "action" novel...which, again, is something it was never intended to be. Cherry is of course an ass-kicking spy with an incredible body, a gorgeous face, and glorious red hair, but in Levinson's hands she's also a lovelorn, hopeless romantic who is given to philosophical introspection. There's only one action scene in the entire book, with Cherry decimating a crew of mobsters as she speeds along in her Ferrari; even the finale is short on action, literally just Cherry sitting down to talk with the villain of the piece.

Anyway, the plot centers around an Aleister Crowley-type magician named Sergei Gubishov, who is taking over Vegas. Using his mental powers he's able to win every game in town, and he's bankrupting the casinos. The mobsters who run the place have tried to kill him, but have failed each time. (We're told one of the hitmen dropped dead after Gubishov merely looked at him.) Cherry's called in by her DUE boss, Derek, and told that if Vegas goes under the entire US economy will topple. Her task is to head to Vegas and kill Gubishov.

Levinson jumps straight into the sex, as Cherry is seduced by her "Southern gentleman" pilot on the flight to Vegas. Cherry has a notoriety for being promiscuous, something that apparently everyone knows, even the pilot...not to mention her boss, who browbeats Cherry over her wanton nature throughout the novel. Cherry stays in a hotel run by Angelo, the boss of the Vegas mobsters-cum-casino owners, and Levinson develops a long-simmer, unrequited love between the two, with constant bickering and banter. The other mobsters aren't too thrilled that for help they've been sent a "broad," but Cherry of course kicks a little mobster ass and they shut up.

This leads to a long backstory in which we learn that Gubishov, about 15 years before, was the man who took Cherry's virginity (or, as she puts it several times: "The man who took Cherry's cherry."). Going under a different name at the time, Gubishov was part of a carnival that came to the teenaged Cherry's hometown all those years ago. After picking Cherry out of the audience to be his partner in the act, Gubishov invited Cherry back to his trailer, where Gubishov revealed that they had been lovers in the past. Graphic sex ensued, with Cherry falling in love with Gubishov, who nonetheless told her that they could never be together, not until she was older.

Back to the present day, where Cherry reveals that she's never gotten over Gubishov and still loves him. Thus, she cannot kill him as ordered. You can already tell this novel's not going the expected route, and Levinson recently mentioned in an email to me that Where The Action Is was "probably the strangest novel I ever wrote." Rather than going up against the villain, Cherry instead tells him that she's still in love with him, could never kill him, and will always love the man who took her virginity.

What's weird is that I kept expecting some curveball to come along, but really that's all there is to it -- when Gubishov learns that his Vegas-wrecking will eventually destroy the entire economy, he decides to just back down! Cherry's suggestion is that he be given one of the hotels, from which he'll make more than enough money to allow him to live in luxury for the rest of his life. Gubishov is amenable to this, and on her way back to the Strip Cherry's attacked by those aforementioned goons, sent there by a mobster she pissed off.

After this one action scene we have another where Cherry kills the mobster himself with a laser penlight. As luck would have it, this mobster was the owner of the casino Gubishov wants to take over. After a meeting with the other mobsters, it's agreed that Gubishov can have the casino, and that takes care of that! The plot of the novel is over, but there's still a quarter of a way to go. When the curveball we've been expecting finally arrives, it comes not through some chicanery on Gubishov's part, but Levinson's; he instead plays up on the foreshadowing throughout the novel, that Cherry is lovelorn and has indeed fallen in with the young mob boss, Angelo.

So we have what started off as an action book that has become more about a crestfallen Cherry Delight, who realizes she will never know true love. She drives back to New York, depressed, and Levinson ends the tale by jumping ahead a year, where Cherry and Angelo finally meet again in Italy. The book actually reads like the first (and only) adventure of Cherry Delight, given that Levinson delves into her teenage years, has her reflecting back on her life, and provides a definite end -- in other words, it's not the open ending one would expect of series fiction. But again, given that this was Levinson's one and only Cherry Delight novel, this is understandable.

And as stated, the book is funny, though occasionally can get a little goofy (no doubt those amphetimines kicking in). The sex scenes are frequent and quite graphic, in particular the sequence where Cherry takes the virginity of Donna's forlorn husband.

Really though, at 176 pages of big print, Where The Action Is comes off more like a novella, a breezy read that I finished before I knew it; which, again, is how I think these men's adventure novels should be written. The longer they are, the more prone they are to becoming padded and tiresome. Levinson keeps things moving at a steady, fun clip, but be warned again that this novel is more of a satire and comedy than a Baroness-type action novel.
Posted by Joe Kenney at 6:30 AM

Ever since seeing adds for the Cherry books in the back of early Mack Bolans, I've always bee curious. I knew Fox (who wrote the Kothar the Barbarian books, some of my favorite 60's era S&S fiction) kicked the series off, and it's neat to see that Levinson got the ball rolling again.

I can actually see this working pretty well. In both the Sergeant and the Rat Bastards books, Levinson weaves some pretty graphic sex into the middle of what are otherwise pretty hardcore, guns blazing, bayonets stabbing, WW2 action. In RB#2, some of the squad rescue a Japanese "comfort girl" who'd escaped the camp she was working in. Two guesses as to whether or not she bangs one of the GIs before the end of the book...

I prefer the Baroness series, for its seriousness and graphic sex. Cherry Delight is more on the 'light' tongue in cheek style. It's very similar to the "Lady From LUST" spy thriller series written by Rod Gray, who I believe is also Gardner Fox. Both Cherry Delight and Lady From LUST were written in first person pov. While Cherry is a red head sexpot, Eve Drum is a brunette secret agent.