The Baroness: The Unpublished Volumes 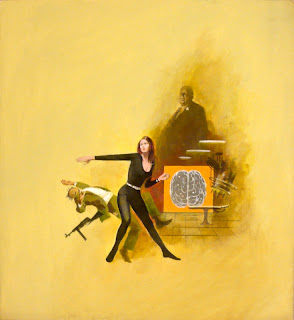 Now that I've finished the Baroness series, I wish there were more volumes to read. While I've never loved the books, they've all been entertaining, and the series definitely has an appeal. A long-lasting appeal, at that, with the Baroness Yahoo Group still going strong. Through the efforts of one particular member of that group, ppsantos, we've learned that Donald Moffitt was in fact the only author of the eight volumes in the series, but also that he wrote two more books, both which went unpublished (at least in English, but more on that later). We've also learned that Robert Vardeman was contracted to write an installment.

Reading through the various messages on the Baroness Yahoo Group, I've pieced together the below list of what these missing three novels would have been about, and also what order I think they would have been published.

#9: Death Is A Copycat -- This one was written by Donald Moffitt. According to some letters Moffitt wrote ppsantos over the past few years (and found in the Photos section of the Baroness Group), Moffitt became ill after turning in #8: Black Gold, and was unable to write for a while. In the meantime series honcho Lyle Kenyon Engel contracted Robert Vardeman to write an installment. In fact, Vardeman's installment might have been slated as #9 in the series, but what makes me suspect otherwise is that Death Is A Copycat was actually published, whereas Vardeman's novel never was. Anyway, this particular volume would have featured Triskelion, a three-legged villain (!) who threatened "to cause chaos by duplicating the world's currency."

As stated, this volume was published, but only in France, where the Baroness series was titled Penny. This installment appeared as the ninth and final volume of the Penny series, with the title Photo-Phobi. A poster on the Baroness Group named Hans Henrik actually read the book, and was kind enough to post a summary of it:

In Death is a Copy Cat Penelope battles a French tycoon, who has made his fortune by inventing the perfect photocopier. The tycoon intends to use his machines for counterfeiting the leading currencies of the world and create financial chaos, which would give him world domination.

This adventure certanly depicts the Baroness as we know her. She is taking care of the bad guys by breaking necks, crushing throats, smashing in heads, or strangling them. Many more are shot or killed with greandes.

Her sex-life is as usual quite imaginitive. She has sex in a barrel of vintage wine with the french duke she met at the end of the book Black Gold. But in this story she confines herself to just one lover.

The manuscript of Moffitt's original still exists, wedged away somewhere in his attic. Whether it will ever see light of day is anyone's guess.

#10: Quicktime Death -- This volume was the only one in the series not written by Donald Moffitt. It was written by Robert Vardeman, a writer I've not yet read, but I know he had his hand in many different series, including Nick Carter. All that's known about Quicktime Death is that it has something to do with "a drug that enhances reaction time." I can only suspect then that at some point in the novel the Baroness engages in high-speed sex. Again, this might have been slated to be the ninth volume of the series; no one is certain. One thing that is known is that it would have preceded the volume below, as on the Baroness Group Vardeman himself commented that, when he turned in Quicktime Death, Engel told him that "the next volume" would be about a black hole. Like Moffitt, Vardeman still has his copy of the manuscript.

#11: A Black Hole To Die In -- Of all the unpublished volumes, this one interests me the most. In this installment "the Baroness goes into space to save Earth from a mini-black hole that both the Chinese and the Russians are trying to capture." Given Moffitt's later focus on science fiction, this volume has a lot of potential, and I hope it might someday be published, whether as an ebook or as a real book. It's currently sitting up in Moffitt's attic, alongside the manuscript for Death Is A Copycat.

So will these missing three volumes ever be released? I'm not holding my breath. The series was the property of Book Creations, owned by Lyle Kenyon Engel, who passed away in 1986. His wife passed away in 1994. That left only Engel's son, George, who was stated to be 47 in a 1982 interview with the family. Book Creations was once an immense fiction factory, employing 40-60 staff writers and cranking out paperback bestsellers. It seems that all publications ceased around 1999, and now George Engel is the last member of the company. By all accounts, he is unresponsive to emails and letters, especially those asking that he consider epublishing the Baroness novels.

A part of me says the authors should just damn the torpedoes and self-publish their manuscripts, given Engel's unresponsiveness, but I'm betting that as soon as that happened, Engel would get real interested, real fast, and call in the lawyers. As another poster on the Baroness Group suggested, the smart thing to do would be to approach the guy with a business proposal, buying the rights to all of the Book Creations action series (The Baroness, John Eagle Expeditor, The Butcher, Nick Carter, etc) and releasing them as ebooks. I bet some serious money could be made from that, but I'm a lazy man, and I do enough business proposals at work.

The picture up top by the way is by series cover artist Hector Garrido; this one's labelled as the sketch for an an untitled/unpublished manuscript, so many suspect it might've been the cover for one of these unpublished novels. It moreso looks to me like it's an early draft of the cover for #1: The Ecstasy Connection. I say this because it features the obese villain Petronius Sim as well as the electronic brain the Baroness was hooked into in that intial volume, which was my favorite in the series.
Posted by Joe Kenney at 6:30 AM

It always fascinates me to hear about unpublished manuscripts. Before these guys die, and the manuscripts are lost forever, I hope the authors let one of their fans have a copy of them so they will be preserved. Even if the fan gives copies to other fans. It would be a shame if the stories are lost forever. The Baroness stories aren't the only ones out there, there are plenty more. It took me years before I finally got a copy of the final unpublished Man From U.N.C.L.E. novel.