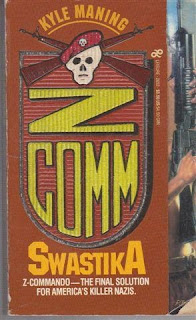 This was the start of a 4-volume series by Kyle Maning, who is none other than our pal David Alexander. I'm not sure why Alexander (or Leisure Books) even bothered with the psuedonym, as the book is quite obviously the product of Alexander's fevered imagination. This series began as he was nearly finished with the ultra-awesome Phoenix saga, and though it isn't a post-nuke pulp, Alexander still finds a way to bring that same level of chaotic madness to the tale. Even if we have to wait a bit to get to it.

Z-Comm is short for "Z-Commando," a 5-man team of bad-ass commandos, each of whom is basically the same as the next (except for the female member, but she's just as tough as the rest of them). Their names alone are proof of their bad-assness (while at the same time sounding like the names of characters in the old Rambo cartoon): Logan Cage, the leader, who "killed more than 500 men in Vietnam;" Sam Proffitt, living lethal weapon and Cage's right-hand man; Frank "Bear" MacBeth, "part-time wrestler, part-time construction worker, full-time bastard;" Domino, the aforementioned female member of the team, who as expected is incredibly beautiful as well as deadly; and finally Zabriskie, electronics and tech wiz who despite his nerdishness is just as skilled and deadly as the others.

Alexander saves the best name however for the villain of the piece: Deacon Johncock (!), a grassroots preacher of Nazi superiority who has carved out his own little slice of Aryan rule in a desolate patch of Middle America. Dressing his endless legions of goons in Nazi uniform, Johncock has taken over the hamlet of Ketchum, Idaho (famed for a visit by Ernest Hemingway years before).

The majority of the populace has fallen sway to Johncock's virulent, anti-Semitic garbage; these sections, of course, where Johncock makes his speeches, gives Alexander ample opportunity to attempt to offend basically every race. Again though, it comes off more funny than offensive, as there's no way any reasonable person could take it all seriously. It all just proves once again that Alexander was one of the few 1980s men's adventure authors who kept alive the over-the-top spirit of the '70s.

For some reason the government has failed to officially do anything about Johncock's takeover. I kept trying to figure out why, but then realized I was thinking about it too much. Let it just be said that it all comes down to Z-Comm, who must band together again and go kill some neo-Nazis. After getting the mission from his handler, Peter Quartermaine (another impressive name), Cage goes about the chore of rounding together the other four members of Z-Comm. This proves to take up a large portion of the novel, as Alexander introduces each of the characters. However it's a bit slow-going as the characters are so alike, save for Proffitt, who has a bit of a tortured soul. He easily stands out from the rest of the team, and I wonder if Alexander didn't base the character a little on himself.

Swastika runs to nearly 300 pages, and this proves to be its undoing. It looks as if Leisure Books was trying to do the same thing as Gold Eagle was at the time -- making their books longer so they'd appear to be "real novels." Instead it just bogs the book down, and Swastika spins its wheels for the first third. Indeed it isn't until around page 170 or so that Alexander finally unleashes his trademark OTT violence and gore. It doesn't quite reach the absurd levels of Phoenix, but it comes close:

The guy closest to him caught both bursts right in his heart. A gaping red crater appeared in his brown shirt as his heart and most of his left lung and a couple of ground-up ribs erupted from the massive exit wound in the blitzed Nazi's back.

Hot steel fragments whizzed around in the body cavity like angry demon hornets, creaming internal organs to soupy vomit. The Nazi pulled some moves that would put Nureyev to shame as he spun away from the HUMVEE and hit the blacktop, skidding on his face.

Alexander also delivers on the expected gun-porn; the final half of the novel is an endless sequence of military acronyms and names of assault weapons. He also serves up more of his wacky descriptive phrases: "vomit Vikings" being one of his favorite terms for Johncock's Nazi goons. And he even manages to include some of the sadism of Phoenix, especially in a grossly hilarious sequence where Johncock lets his Nazis run rampant over Ketchum, killing and raping and pillaging, Alexander documenting each horrible act in gruesome detail.

The length of the book also hampers the finale. Once Z-Comm has arrived and done some research, Cage posing as a terrorist with KGB ties (his undercover name, interestingly, is "Coltray," which was the title of a 3-volume series Alexander published soon after this), they decide to just waste Johncock and his Nazis. Lots of great action scenes ensue, but again it all comes off like that Rambo cartoon, with Johncock escaping, coming back with more men, capturing some members of Z-Comm, the other members freeing them, Johncock escaping again, and etc etc. While it's fun, it's also obvious that Alexander had a large page count to fill and was having a hard time of it.

But who am I kidding? This is David Alexander, after all, and his books are always enjoyable. I've got the rest of this series and look forward to continuing with it; it's not as jawdropping as Phoenix (but then what is?), but how can you go wrong with a series that has villains with names like "Deacon Johncock??"
Posted by Joe Kenney at 6:30 AM

Never read this one but I remember the Coltray series, and the less said about it the better. Luckily they were short.

Alexander also did a short series for Gold Eagle called NOMAD if I am not mistaken, an action series with a sci-fi twist. I recall that one being good, and it was published under his own name.