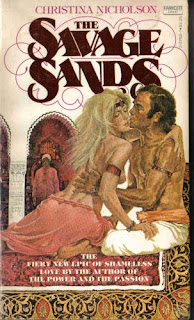 I've had this one for a while and kept meaning to get around to it. For whatever reason I'm fascinated with 18th-19th Century Algiers and Morocco, a lost world of sand-swept decadence, harems, Barbary Corsairs, and "pirate utopias" (as Hakim Bey/Peter Lamborn Wilson calls them). The Savage Sands appealed to me as it takes place (partly) in this world: the novel occurs during the 1820s and concerns a gorgeous blonde of American birth who is captured in Paris and given to the Dey of Algiers to become a member of his harem. I assumed the majority of the novel would occur in the world of the harem, but in fact only about a quarter of it does; the remainder is given over to a sprawling desert adventure that goes on much too long.

The girl in question is Catherine Scott, born in Boston but now in France, raised by her widowed father and her stepmother, who is only a decade or two older than Catherine. Still a teenager, Catherine is taken from school by her stepmother, Madeleine, and goes with her back to Paris. Here ensues your typical Romance fiction stuff, with Catherine getting beautified in all the parlours, gossiping with her worldly stepmom (who wants Catherine to think of her as a sister), and hobknobbing with people like Victor Hugo and Balzac. Also, shortly before leaving the school Catherine met rail-thin but handsome artist David Mulawar, who instantly became smitten with Catherine and who has followed her to Paris. But since he's poor and unknown, Madeleine advises Catherine to set her goals higher.

To wit, Madeleine introduces Catherine to Baron Ricimer, a hunk of a German he-man who immediately sets his dark eyes on Catherine. However she suspects something evil behind the Baron's look; regardless, pretty soon she finds herself fantasizing about him. (And David Mulawar too.) After more Parisian society stuff, it all comes to a head when Catherine, Madeleine, and Madeleine's 12 year-old son Jean-Pierre go visit Ricimer. It turns out that Madeleine was only using Catherine as bait; Madeleine wants Ricimer for herself. But instead they are waylaid by brigands and tied up; masked, they are hussled through the French countryside and finally find themselves on a ship, heading away from French waters.

Ricimer has captured them; he reveals himself to be a personal servant of the Dey of Algiers. Ricimer's been tasked by the Dey to scout around Europe for good-looking virgins (boys and girls) to be added to the harem. Catherine's beauty is so breathtaking that Ricimer is certain she will become one of the Dey's favorites in his army-sized harem. However first he must train her in the sexual arts, particularly how to please a very old man, with the caveat that Catherine must remain a virgin until she gets to the Dey's bed. As expected Catherine is at first shocked and afraid, eventually filled with rage, but gradually finds herself so attracted to Ricimer -- in particular so turned on by his obvious prowess (in one memorable scene he takes Madeleine as Catherine watches, to show how it's done) -- that she finds herself falling in love with him.

Finally though they get to Algiers. The decadent atmosphere of the locale is brushed over; Catherine, of course, is limited to the world of the harem, and can never leave it, so her knowledge of the surrounding city is limited. Catherine's entrance into the harem is well-rendered, as she's bathed and all of her body hair is removed in a grueling sequence. At length she's sent to the bed of the Dey, a man well past 80, broken from the years and his own lecherousness. After getting off to a rocky start (if she doesn't instantly woo the Dey, Catherine will be sent off to a grisly death), Catherine seduces the Dey and he takes her virginity. (At least she thinks he does; it's all over in a flash.) At any rate the Dey is pleased, and Catherine doesn't just become his favorite member of the harem, he places her so far above the others that she basically becomes another of his wives.

Nicholson weaves around Catherine's life in the harem, surrounded by jealous peers, to visits to the Dey's chamber, where the Dey will relate glimmerings of what's going on his world before brief tumbles in the bed. War is soon to come with France and Catherine expects her freedom may ensue. Meanwhile Madeleine has been given to her as her personal slave, and Jean-Pierre, Madeleine's son, has been drafted into the male half of Dey's harem. In another grueling sequence, Catherine must choose whether Jean-Pierre should die or be castrated. She chooses the latter, which as expected makes both Jean-Pierre and Madeleine hate her.

But again, in this harem section of The Savage Sands Nicholson does a grand job of bringing to life the decadent world of North Africa in the early 19th Century. I could've read an entire novel filled with all of the rumor-mongering and secret wars he sets up here among the harem girls, but sadly it all comes to a quick end with the return of Baron Ricimer, two years after he left Catherine here. War is coming with the French, and soon. After being encouraged by Catherine, the Dey determines to fight them, though secretly he fears Algiers is doomed. And it is, the French decimating the Algierian army and closing in on the Dey's palace.

The French have given the Dey the option of leaving Algiers forever as part of his surrender; he may take with him his wives. He comes to Catherine in the harem and asks her to marry him. She hesitates a moment and instantly the Dey sees that she's never loved him. He orders her death, and here Catherine learns that she's never had any friends in the harem: not only do Madeleine and Jean-Pierre seem happy at her imminent death, but even her former pal the Harem Agha (ie the eunuch in charge of the harem) rushes to follow the Dey's command. Catherine is to be tossed in a sack and drowned in shallow, muddy water. Only the gun-blasting arrival of Ricimer and his desert-warrior comrades saves Catherine from death.

Unfortunately The Savage Sands still has a long way to go from here. Riding out into the desert hinterlands with Ricimer, Catherine not only finally gets to act upon her long fantasies of the man, but also marries him. Soon though she finds herself relegated to unimportance; while Ricimer and his desert men get in battles and monitor the events between the French and the Algierians, Catherine has Ricimer's child and is kept on the sidelines, raising it and trying to live among the desert people. Gradually she takes a larger part in the narrative; Catherine's father was a military strategist, and in an early bit of foreshadowing Nicholson relates that, in her youth, Catherine had helped her father write his books on strategy and warfare. So then we are not to be too surprised when, much later in the novel, Catherine uses her strategic skill to plan and win several battles.

But after the harem material the novel loses its thread. David Mulawar as expected returns, so in love with Catherine that he has joined the Legion if only for the chance of finding her somewhere. There is the required happy ending, but it takes much to long to arrive; the novel runs to nearly 450 pages. And curiously, for a novel so focused on sex, there really isn't much of it in The Savage Sands. Other than Ricimer's training sequence, where he advised Catherine in graphic detail on how to please a man, the sex scenes themselves are hardly graphic. And since the Dey is presented as so wasted from years, it's not like he's pulling off any sexual athletics in the bedroom.

I forgot to mention -- Christina Nicholson is actually British author Christopher Nichols. I think he wrote another Romance or two under the "Nicholson" psuedonym. His writing here is good, with great scene-setting, period detail, and colorful touches. I just felt that the novel was too long for its own good, veering away much too quickly from the harem section.
Posted by Joe Kenney at 6:30 AM

blonde girls in harems... ummm... with all black haired girls against her because of jealous, intrigues, struggles between them, can be another good novel

i don't know if he's translated to english but the works of spanish writer Alberto Vazquez Figueroa could be very interesting for you, Tuareg, Ebano (Ashanti) about a black girl abducted to a harem and the efforts of his white boyfriend to rescue her from slavers or Manaos about the run of some guys and a girl of a slave camp in the Amazonia