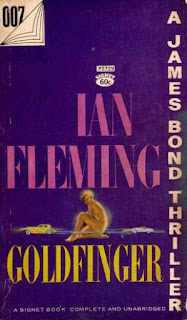 I read it a long time ago, I don't remember it well. Goldfinger has a narcotic, dreamlike vibe (is Fleming under the influence of drugs these days?), which is broken when Tilly talks about Jill's "golden" death. I liked that horror moment, it breaks the dream of Bond and the reader (I differ with you, it is more suggestive to listen to it than to see it, at least in the reading). I think Fleming should have written a novel about Pussy Galore and her girls (was she inspired by his mistress back then?).