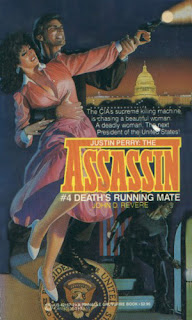 Justin Perry: The Assassin #4: Death’s Running Mate, by John D. Revere
January, 1985  Pinnacle Books
I meant to read this fourth volume of Justin Perry back in November, but I’m glad I didn’t; I don’t think I could’ve handled two fictitious elections at the time.* The plot of Death’s Running Mate concerns an evil organization’s scheme to get its female candidate into the White House, no matter the cost: election laws, the Constitution, and the will of the American people be damned. As if such a thing could happen in the real world! Luckily the Federal government is concerned about such things (in the book, I mean), thus the CIA calls in its top assassin to stop the scheme: Justin “I guess I’m a weirdo” Perry.
As I mention every single time, I read the last volume first, which while not ideal has allowed me to see the story Hal “John D. Revere” seemingly had in mind from the first volume. Namely, that this is a deeply perverted satire of the men’s adventure or spy genre and also that it’s a psycho-sexual headfuck of the highest order. In fact some of it is downright creepy in the surreal textures Bennett adds to the narrative. But don’t get me wrong; this one’s a total failure as an “adventure novel,” as all the other volumes in the series are: action is practically nonexistent, there’s endless amounts of exposition and padding, and major events and plot developments occur off-page. But then it’s very clear by this point that the series doesn’t take place in any normal sort of reality.
There’s no pickup from the previous volume, and in fact Bennett pulls all sorts of “literary” narrative tricks with this one so far as time goes. It opens toward the end, with Justin flashing back to a year ago, and from there the narrative will continue flashing back and forth to random points (including even to Justin’s childhood and to his first kill as a CIA assassin) before finally getting back to this opening section, which is actually the finale…which is then rendered in summary, Bennett having run out of pages given all his excessive padding. Anyway, we meet Justin Perry in November of 1983 (so then a month after the previous volume...yet the events of this novel actually occur before that volume, and thus would contradict its events!), with his erstwhile sidekick/demonic familiar Bob Dante; they’re in the small town of Carlton, Illinois, and Justin informs Bob they’re going to have to blow up the entire town – killing everyone in it. This leads into a discussion of how there are no children in the town – everyone here, Justin affirms, is depraved and evil, and deserving of death.
From here we get into the typically-bizarre circumstances which set the scene. We flash back to February of ’83, in which two weird incidents occurred: SADIF, that SPECTRE-like evil organization dedicated to conquering the world (which will ultimately be cast aside in the following volume, to be revealed as a front for a Halley Comet-worshipping cult), has freed patients from several mental institutions around the country. On that same night, a ravishing brunette named Andrea McKay announces the start of the Federalist-Liberal Party (“a colorful coalition of dissident Democrats and Republicans, homosexuals, blacks, Hispanics, Jews, cripples, females, and the like”), which is determined to “throw the rats out” of DC (a sort of prefigure of “Drain the Swamp,” but then Bennett prefigures a lot of stuff here). To give evidence to this, McKay’s party is known for eating rat meat and drinking champagne.
Justin’s CIA boss, the Old Man (who is revealed here to only be 40 years old!), is convinced these two incidents are connected. He’s truly presented as a sadist this time; he has “scripts” he prepares for his agents, complete with veritable stage directions they’re to follow when on assignment, with photos of “suspected SADIF agents” to look out for. Bennett especially rams home this whole “play” motif this time, with events happening on cue…just as predicted in the Old Man’s script, complete with even suspected SADIF agents making “dramatic” entries. And again this is all just foreshadowing for the following volume’s revelation that the Old Man is really boss of the Halley Society, and another person whose entire life has apparently been spent toying with Justin Perry like a puppet on strings. And again all of it adding to the surreal vibe of the entire series.
So Justin’s sent to Chicago, where he’s to pose as a psychiatrist at Riverview, one of the sanitariums SADIF didn’t break anyone out of. Just to make things all the more weird, Justin sees a hot babe in a truck filled with pumpkins following behind him as he drives to the sanitarium; his thoughts here are so humorous I just had to share them: 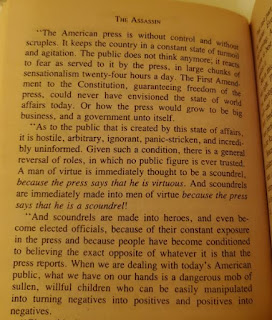 This whole section really threw me for a loop; it’s like Bennett saw what passed for the mainstream media circa 2016-2020. The first paragraph alone sums up the COVID fear-porn that has served as headline news for the past fucking year. Especially notable is the Old Man’s comment that the people will vote for whoever the press is against.  His solution is for the media to proclaim bad people good, so that voters won’t vote for them, out of general contrariness. It’s for this bonkers reason that the CIA can’t go forward with the info that Andrea McKay is actually an agent for SADIF; if they were to do so, voters would disbelieve the press and vote for McKay anyway.
But we’re not done with the prescience yet. Here’s another bit that I found very compelling, after our summer of “peaceful protests” and the situation it has led us to: 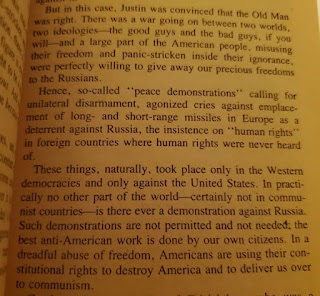 And finally check this out…we learn that Andrea McKay might win because she encourages voters to stay home!  (Not to mention that she's a “fabrication of the American news media!”) 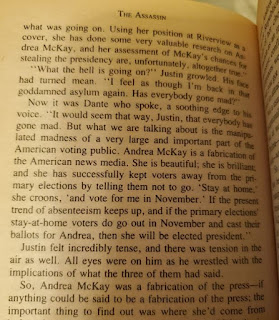 But anyway the book is crazy enough without the predictions that came true: Justin finally sees Andrea McKay on TV (“She looked like a spectacular Dolly Parton with large breasts, black hair and green eyes” – and let’s not forget that memorable line “slut-green eyes” from Volume 1, yet another recurring Bennett motif). He is shocked to discover it is the very same ravishing brunette who had sex with him the night before he escaped the asylum! Even more surreal…when Andrea has her first political debate and is asked questions on the economy and politics and whatnot, the answers she gives are the exact same answers Justin gave to the four female invates in his own “debate” at the asylum! As I say, this entire series is just so weird, and made even more weird by Justin’s almost casual acceptance of how weird everything is. But any forward momentum is abruptly lost, as Justin next moves on to Carlton, Illinois, smalltown home of Andrea McKay, and proceeds to spend nine months there, posing as a journalist. This part just goes on and on and on and is mostly made up of blocks of narrative.
Meanwhile Justin has energetic sex with Fran, the hot blonde receptionist at his hotel (and yet another SADIF agent); per the series template, there is a violent aspect to the relationship, with Justin enjoying the power he has over her, thanks to his massive member: “Perhaps he would kill her right now, with his dick.” Speaking of killing, Justin finally lives up to his “assassin” tag very late in the novel. Once again clad in the one-piece black nylon suit he sports on the covers, he knifes four SADIF agents to death in the dark, as ever getting all hot and bothered in the process. These men are security for Andrea McKay, who turns out to be a basketcase under the care of Dr. Thelma Carew…and further her full name happens to be Andrea Beth McKay…and yes, the very same “Betty” Justin deflowered in Orlando twenty years ago! Justin conjugates with her right here in the open showiness of nature: “His balls slapped like bell clappers against her ass, hurting him; but the pain felt good.”
But even this will turn out to be an endless series of reversals and re-reversals. Perhaps Andrea McKay really isn’t Betty from Orlando…and maybe she’s just been programmed by a certain person, given the implant that’s embedded behind her left ear. Regardless, Andrea happens to win the election, even though she’s so mentally incompetent that she doesn’t know where she is half the time, and is only lucid when drugged up by her handlers. (No comment!) But even here in the homestretch it’s all about the exposition and the narrative padding; even worse is what seems to be the climactic moment, with Justin and Bob, both in those black commando suits, about to blow up Carlston (ie the incident which started off the friggin’ novel, 180 pages ago)…and then Bennet flash forwards yet again, to three months later and Justin hanging out in Jamaica! Even here the “climax” is relayed via backstory, Justin reflecting on the events of that night, in which friends turned out to be SADIF agents. This part does at least have a memorable moment where Justin blows away a shotgun-wielding old woman.
And that’s it, really. Another recurring motif – and likely another in-joke – is how Justin’s always falling in “love” with some woman; it’s happened pretty much every volume. This time he thinks he’s falling in love with both Thelma and Andrea, but of course doesn’t know whether either (or both) of them is SADIF. Not that it matters; Death’s Running Mate ends with Justin happily reunited with one of the two, here in Jamaica, but we know she’ll be out of the picture soon, given Justin’s statement that she’ll be sent to South America to stay in a CIA safehouse so as to escape SADIF’s wrath. As for the other female character, Justin has dispatched her…unbelievably enough, off-page! One almost gets the impression that Bennett is so busy with all his psycho-sexual literary subtext that he’s overlooked how to tell a compelling story.
Regardless, I really did enjoy Justin Perry. I think it would be rewarding to read the whole series at once; I bet that would really reveal how Bennett had the end game in mind from the start. But also at the same time your brain would truly be rotted after such an experience. I’m almost tempted to re-read Stud Service now that I’ve read the previous four books, just to catch all the stuff I missed that first time. And you know what, maybe I’ll do just that.
*I am of course referring to the plot of The Penetrator #37: Candidate’s Blood, which I read in October. I hope you didn’t get the wrong impression, comrades!
Posted by Joe Kenney at 6:30 AM

I wonder if the weird-acting politicians eating rats is a G. Gordon Liddy joke. That's one part of his autobiography that's familiar to people who've never even read it, including me.

Bennett must have been a rogue CIA agent who passed future plans in novel form.