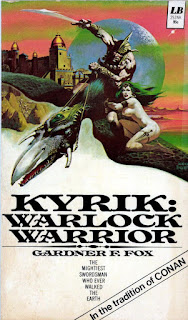 Another interesting review that brings back memories of browsing through paperbacks in bookstores. That Ken Barr cover pulled me in, too -- back in '75.

The Survivalist digression is great. I was reading that series in sixth grade, so it still has a bit of the nostalgic factor for me, but man...it is pretty bad. I did try the graphic audio version of the first novel or two probably ten years ago. The main character voice sounded like he was doing a John Wayne impression which both cracked me up and made me a little sad. As always, great stuff Joe! Thank you!

How is barbaric sex? I suspect short and intense.