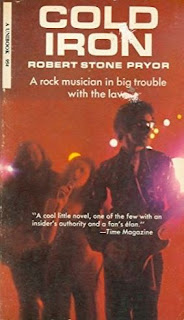 Here’s another obscure rock novel, although the rock stuff isn’t that integral to the plot. It’s more of a piece on the drug-addled rabble-rousers of the day, with one of the chief rabble-rousers clearly being modeled on Jim Morrison. The book even opens with a quote from “Five To One” so everyone can get in on the joke from the start.

While Cold Iron garnered some critical acclaim, it clearly didn’t take off with readers; this paperback edition came out via lowly Unibooks, which I believe was yet another wing of Belmont-Tower. And this was the only other edition it got, so clearly the book didn’t resonate much. Perhaps the most interesting thing about Cold Iron is the identity of its author; the jacket of the original hard cover edition (also dated 1970) makes it clear that “Robert Stone Pryor” is “the pseudonym of a well-known young novelist.” Surely it wasn’t just Robert Stone, he of Dog Soldiers??

I don’t think it’s ever been revealed who the author really was (likely given how obscure the novel is – no one cares), but there’s a funny part early on where Woody, the main character of the novel, mistakenly thinks someone’s name is “Steven King.” I got a bit of a chuckle out of that, but Cold Iron is certainly not the work of that “Steven” King; it’s much, much too literary…and plus no one even knew who Stephen King was in 1970. Other of course than his friends and family and stuff.

And how can you tell Cold Iron is a literary novel? Simple – the author’s a bit too in love with his prose, characters are seldom described and never introduced, scenes are seldom if ever set up, and there’s no real plot to speak of. And the book is filled with those grating little “hipster” annoyances of literary fiction…like the fact that Woody is actually, get it, a girl! Her full name is Woods Hagen and she’s a novelist-screenwriter of some fame, apparently, not that she does any writing in the novel itself. Rather, she spends her time in such a befuddled state that you wonder how she got any work done in the first place.

The novel takes place in Los Angeles and occurs over a few days of what is presumably 1969, though there isn’t much in the way of topical details. Nor is there a peek into the Hollywood culture of the day, or for that matter even the rock business. Really the novel’s mostly comrpised of Woody and her comrades getting blitzed and running various pranks on the Man. We get no setup on Woody or “the boys” who live with her, two guys who I assume are in a casual relationship with her. There’s also her boyfriend, an up-and-coming actor, who doesn’t do much to make himself memorable.

Aside from Woody the only character we get to know is “Big Jim” O’Leary, the aforementioned Morrison analog. He’s a long-haired, self-styled poet who fronts the rock group Cold Iron, which is of course the Doors, only a Doors with a bassist and without a keyboard player. Otherwise this is pretty much Doors fan-fiction, only with the Doors mostly off-page for the duration of the novel, save for one or two very brief concert scenes and one peek in the recording studio. Pryor is another of those authors incapable of telling us how his fictional rock band sounds; we get a lot of O’Leary’s lyrics, and him jumping around the stage and all that jazz, but what the music itself sounds like is something the reader must determine himself.

We open with one of those few concert scenes, Cold Iron playing to a big outdoor crowd at the Venice Love-In. Here O’Leary makes like his real-life counterpart and dangles a rose over his crotch – in a later, off-page gig in Wisconsin, he’ll be arrested, same again as Morrison was, for actually exposing himself to the audience. But Cold Iron is sort of like the Doors mixed with the Jefferson Airplane; I mean there’s no Grace Slick analog, but they’re like “up against the wall” proponents who could likely initiate the revolution all the kids are expecting. O’Leary proves this by poking fun at the “pigs,” sparking a mini-riot. In the melee Woody is arrested, apropos of nothing; it’s indicated that it’s just the usual hassling by the pigs, but as the novel proceeds we see that Woody really is pretty much a degenerate danger to society.

As mentioned there’s no setup or explanation for any of the characters – that’s just how literary fiction rolls – and soon Woody’s calling other characters we’ve never met to figure out how to proceed with her upcoming trial. They have her on various bullshit counts, one of which is assaulting an officer, when all Woody did was hold her hands out for the cuffs. Cold Iron escaped the wrath of the law, but O’Leary brings it down on himself soon enough, at that off-page concert in Wisconsin. Just like the Lizard King in Miami (I think it was), O’Leary works himself up on stage and whips it out, and now the law is coming down hard on him, same as it was on Jimbo. And just like Morrison, O’Leary’s able to cross state lines and sneak back to LA, where he and Woody continue their newfound relationship.

Curiously, for a famous rock star, O’Leary pines for Woody, even though we learn he thinks she has a “boyish” vibe and isn’t the most gorgeous of women. I say curious because Woody keeps putting him off, despite the fact that he’s a famous rocker with girls going ga-ga over him around the world. But after the Love-In gig she finds herself grooving to O’Leary’s sinnuous onstage mannerisms, and soon enough they’re having some hot off-page sex. Which is yet another curious thing – for a novel published in 1970 about drug-addled rockers and radicals, Cold Iron is very tame in the sex department. All of it occurs off-page and the author is not interested at all in exploiting the anatomies of his characters, be they female or male.

Now both of them self-styled fugitives of the law, O’Leary and Woody do the sensible thing…and begin a sort of mad prankster war on the straights and the narks. Like the hapless nark they spot spying on Woody’s place; now that she’s been arrested, her house is constantly monitored by cops who suspect her of housing radicals and drugs and whatnot. O’Leary comes up with the very un-Jim Morrison idea of painting their bodies in psychedelic colors and then they go out and sort of play aggressive peek-a-boo with the poor old nark, scaring him half out of his wits. Meanwhile O’Leary’s also hotwired the guy’s car and moved it onto Woody’s property so they could call the cops and have it towed.

Sometimes the cops ask for it, like when Woody is driving and abruptly pulled over, the cop likely being incensed by passenger O’Leary’s long hair. Of course, they’re both high and are carrying, and the cop paws Woody and then basically beats the shit out of O’Leary – who casually reveals to Woody when they’re safely away that he was indeed carrying a few joints all along. He just hid them in his long hair. Oh and the straights get theirs, too, like when Woody, O’Leary, and her usual “boys” get blitzed on various drugs and head to a shopping center, freaking the masses. This includes a troubling bit where O’Leary takes a toy gun and starts aiming and shooting at other customers, in particular a store employee. It’s all just so juvenile, with O’Leary and Woody hassling the guy relentlessly, and I couldn’t tell if Pryor meant for us to be laughing at the hijinks or condemning the duo.

As for the Cold Iron material, it’s sadly scant. We see that O’Leary has a bit of tension with the lead guitarist, which I guess sort of paralells how Morrison didn’t always see eye-to-eye with Robbie Krieger, particularly over Morrison’s hardcore drinking. But for Cold Iron the group is just sick of O’Leary’s onstage antics and general bullshit, and threaten they’re going to drop him if he keeps it up. O’Leary takes it in stride and tells them he might not want to stay with the group after all. Pryor ends the novel without us finding out what happens.

Speaking of the ending, Cold Iron has the most abrupt conclusion I’ve ever read. Woody has her court date and the judge isn’t as lenient as she’d hoped for, given that she has a prior arrest on her file. He gives her a year’s probation, which freaks her out – she says she’ll just go to jail for the two months the judge gave her, instead of living a year of paranoia on probation. O’Leary shows up and cheers her up over a burger lunch, then they get in Woody’s car, she backs out – and that’s it! The novel’s over. It’s almost like the literary equivalent of a bitch slap.

Overall I found Cold Iron middling, not so terrible that I hated it and not so entertaining that I loved it. Ultimately it was forgettable.
Posted by Joe Kenney at 6:30 AM

I have seen lines like “the pseudonym of a well-known young novelist.” all too often in the cheaper end of the market. The 'Countdown WWIII' series by W.X. Davies (Described as "...the pseudonym of a well-known author. He took on this new series both to entertain and to argue for a more sophisticated espionage capability for the US.") is a case in point, but the most recent one was a novel called 'Atlantis: Revelation' which came out in 2013, clearly the first in a series that didn't go beyond the first book and written by someone whose name was the pseudonym for "...a bestselling author who lives in the UK with his wife."

It's often quite frustrating when you want to criticize something, but have no idea who the target should be.

Stephen King had managed to publish some short fiction by 1970, if not too much.

Thanks! I was hoping someone would know!