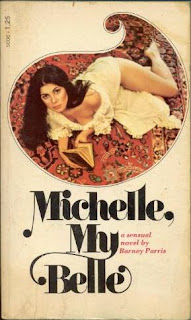 The first of two novels about a “seventeen year-old vixen” who has the powers of “Extra Sensual Perception” (per the back cover), Michelle, My Belle is another of those light-hearted sexual romps that apparently littered the paperback stands of the early ‘70s. Most of them were courtesy Dell Books, sporting risque covers and overly-salacious back-cover copy. As is the case with Michelle, My Bell. The book is copyright George Wolk, a prolific writer who published under a slew of pseudonyms; he died in 1980.

This is one of those novels where I have to wonder what the author was thinking. I mean, I don’t expect these paperback writers to be James Joyce, but still – this is a book in which the titular main character barely appears for the first hundred pages, and the free-ranging plot concerns a young, upcoming artist trying to get out of paying a bar tab. Meanwhile a superhumanly-hung basketball player searches for “the right fit.” I mean you don’t just wake up one day and think this is going to be the novel that puts me on the map…my suspicion is the majority of these Dell pseudo-sleaze books were done at the behest of horny-but-skittish editors who wanted to capitalize on the increasing permisiveness of sexual content in mainstream fiction but didn’t want to go “full sleaze.”

I say pseudo-sleaze because, with the exception of Irving Greenfield’s Making U-Hoo, none of these Dell books I’ve yet read are overly explicit. Some of them have great titles and covers, with cover copy that promises a hot good ol’ time, but each without fail are ruined by overly-“comedic” plots. My assumption is that this too was some sort of editorial mandate; even Greenfield’s novel has a goofy plot. I guess Dell wanted to have its cake and eat it, too…salacious covers, titles, and plots, but tempered a bit with a “humorous” approach. Who knows. About the most I can say is that, whatever the story behind these books, they’re sort of chores to get through.

As is the case, sadly, with Michelle, My Belle. But it did well enough with ‘70s readers that Wolk, again serving as “Barney Parris,” turned in a sequel two years later, confusingly just titled Michelle. Hopefully the titular character puts in more of an appearance in that one; in this first installment, Michelle initially just serves as a convenient means of tying together disparate plot threads. This is due to her ESP, which has gotten her into such trouble back home in Los Angeles that she’s been sent off to stay with her aunt Elaina in Manhattan.

Another of those characters with her own subplot, Elaina is a hot-to-trot divorcee in her mid thirties; she and Michelle look very similar, we’re informed, brunette vixens with smokin’ bods, but whereas Michelle, as we’ll learn, is a virgin, Elaina’s been around the block and then some. Currently she has her sights on oafish Bernard – older, not very handsome, and sporting a paunch – solely due to the reason that he’s wealthy. To this end she kicks out her latest live-in lover, walrus moustache-sporting artist Timothy June, the latest darling of Manhattan’s pretentious art crowd.

June (arbitrarily also referred to as “Timothy” in the narrative – Wolk lacks consistency in this regard for all the characters) is the bar tab owner…honestly folks this is one of the lamest plots I’ve ever read in a novel, and it turns out to be the main plot! At novel’s beginning we learn that the bar he owes two thousand bucks to is about to be taken over by the mob, and the owner wants June to pay up his tab posthaste so he, the owner, can keep the place. So when June’s kicked out of Elaina’s penthouse apartment he hides out with fellow young artist Cooper.

Given the novel’s publication date and setting I do wish there was a bit more of the vibe of the times; we only get a little groovy stuff, here and there – like how Cooper paints up the nude body of busty Rena in psychedelic colors. Strike that – Rena isn’t just busty, she has “Class A” boobs. She’s also kind of chunky, in a pleasing way…Wolk actually can’t seem to decide how to describe her. But everyone lusts after her. When we meet her Cooper’s just managed to sleep with her when the characters are introduced – Rena has a casual sex thing going with both he and June – but, per those Dell dictates, it isn’t anything too explicit.

Meanwhile Michelle when we meet her is on a flight into New York; we don’t get the full details, but somehow her ESP visions has so angered her mother that now Michelle is being sent off to stay with Elaina. Seated beside Michelle on the flight is an incredibly tall black guy who turns out to be a star basketball player; his name is Harry Oliver. Apropos of nothing they discuss Michelle’s ESP, and Oliver’s hip to it, and even says he’ll try to help Michelle figure out whoever this “April, May, or June” person is she’s having ESP flashes about – someone she doesn’t know, but is certain is in trouble.

It’s all very ridiculous; Wolk brazenly takes all these unrelated plots and just messily hooks them together via Michelle’s supernatural gift. So we follow Harry Oliver as he visits a deluxe bordello, discusses his unique problem, and ends up engaging all the hookers during his visit. This is the most explicit sequence in the novel, and also where we learn Oliver’s got a 14-inch dick, for crying out loud. It also takes a lot of work to bring him to climax, with the girls working in tandem in various capacities.

Meanwhile another plot has the increasingly-unlikable Timothy June ambushing meek Bernard, ie Elaina’s wealthy target. Ostensibly this is so June can keep Bernard from marrying Elaina, but instead the two start hanging out, June pushing himself on the loser as the best friend he never had. Eventually they go back to Cooper’s place, where it’s busty Rena’s turn to, uh, waylay Bernard. This she does in another fairly explicit sequence, and while she starts off very unattracted to the old creep, she soon finds herself orgasming mightily. Love ensues.

The bar tab subplot is the most stupid in the book, but the one Wolk focuses the most on. June and Cooper run around Manhattan, eventually meeting Michelle – and June instantly loves her, declares she is his muse. At dinner in a fancy restaurant, June announces to the shock of Elaina and Michelle’s gay father (another subplot, this one only vaguely covered) that he plans to marry Michelle. But later on the two are cornered by a pair of crooks looking to steal the two thousand bucks that Michelle’s managed to get for June – the benefit of having jet-setting, soul-lacking narcissists for family is that they’re rich, I guess.

Harry Oliver, who reveals that he’d planned to seduce Michelle that night, virgin or not, meets Elaina – and instantly knows that she’s one of the precious few women in the world who can fit him. I guess he’s got his own sort of ESP. And guess what, folks, she can – all 14 inches, all the way until their “pelvic bones meet.” Good grief! And Michelle gives her virginity to Timothy June while they’re being chased, a goofy scene that features them being force-fed LSD sugarcubes(!) so as to make their murders appear to be suicide, with the crooks intending to push them off a building. Instead it’s Harry Oliver to the rescue, even though we just saw him in bed with Elaina.

Well folks, that’s it for Michelle, My Belle. There’s not a single thing here that would warrant a sequel, but one was forthcoming; at least the cover slugline of “Michelle meets the Godfather!” makes Michelle sound interesting. But honestly it couldn’t be worse than this one. Or at least so one would hope.
Posted by Joe Kenney at 6:30 AM

Definitely not something I plan to read. It sounds like the author would have been better off trying to turn the Beatles song the title is taken from into a novel.

I was waiting for an explanation of what her version of ESP amounted to, but reading the review I'm guessing the book is pretty unclear about it already.