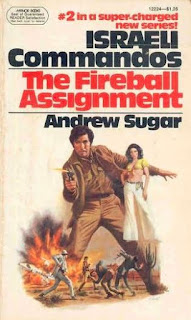 Here’s another series I took too long of a break from. The second Israeli Commandos is more entertaining than the first, and also proves that the series title should be plural, after all; it appears that Andrew Sugar intends to focus on a different “Israeli Commando” each volume, rather than the “team” concept I assumed from the series title. Last time it was “Israeli Muhammad Ali”(!!) Dov Abrams, this time it’s former American turned Israeli citizen Gershon Yelinga.

Abrams opens the book, lending the impression that he will again be the protagonist; he’s in Syria, taking out a machine gun nest, not aware that this latest Israeli-Syrian war has ended within the past hour. He’s assisted by a young man with no experience; this is a recurring theme in The Fireball Assignment, as both Abrams and Yelinga consider themselves “old” and surrounded by young, inexperienced Israelis. This is a taut scene, more thrilling than any in the previous book, as Abrams worms his way through barren terrain toward the machine gun emplacement while the kid acts as a diversion. Abrams succeeds, killing the two Syrian soldiers, but the kid ends up setting off buried mines after all, killing himself and injuring Abrams.

Here's where we learn Abrams won’t be the star of the show; when next we meet him, he’s in the hospital and temporarily blinded. The Major, Abrams’s intelligence boss, mourns the fact that Abrams won’t be able to go on this little assignment that just came up. No big deal, though; the Major will send Gershon Yelinga, who as we’ll recall appeared in the previous book as a supporting character. After this Sugar drops Abrams, still fretting in his hospital bed over all the people he’s had to kill in his military career, and we never go back to him. The ball’s firmly in Yelinga’s court, and to tell the truth I think he’s a more likable protagonist.

Like Abrams Yelinga is “older,” at least so far as his fellow Israelis are concerned: he’s 41, and has spent his career on the field. But as with most Sugar protagonists, Yelinga is plagued with self-doubt and occasionally tempts himself with the thought of falling in love and quitting the warfare game. This is a common trend in Sugar’s work, and even a glue-sniffing kid could tell you that tradition demands that something bad will happen to the woman in question before book’s end. Surprisingly enough, this doesn’t happen here – Sugar delivers the expected emotional gutting in a different manner.

Another thing about The Fireball Assignment is that it’s packed with action, particularly when compared to Sugar’s Enforcer novels. While I loved them – but unfortunately a re-reading of The Enforcer #1 the other year didn’t thrill me nearly as much as my first reading did – those books were methodically-paced at best. Given this I wondered if Sugar would be able to do a more action-based series. He proves without a doubt that he can, but be warned that The Fireball Assignment is too long for its own good, coming in at 190 pages of small print – meaning that, while it does feature frequent action, too much of it is of an arbitrary nature.

Yelinga’s assignment is to head back into Syria and detain a former CIA operative who has gone over to the Arabs. His name is Morris, and, like Joaquin Hawks, his belt buckle is a disguised .38. Yelinga, like Abrams, is given an untried youth for his comrade, and together they venture to Latakia and collect Morris, catching him in bed with a young hooker; yet another taut scene. And a scene that ends similarly to the previous one; Yelinga’s kid partner pulls a dumb move and ends up dead, the whore too. But Yelinga gets Morris, takes him aboard a sub, and there a ghoulish Israeli intelligence doctor breaks the former agent with heavy-duty drugs.

Morris was in Latakia as he’d been contacted along with other foreign agents by the PLO, which has something nefarious in mind; all he knows of it is the codename “Fireball.” The Major now tasks Yelinga with a new assignment – he’s to go back to Latakia, but this time posing as Morris. So back goes our hero to Latakia – which us men’s adventure die-hards know as the place where Nick Carter gets the tobacco for his specially-made cigarettes – and meets Morris’s contact in a sleazy bar. Sugar does a good job of capturing the uncertainty of Yelinga’s actions, of how he carefully wades into this dangerous situation, relying on his experience while fretting over how “old” he is for this stuff – another theme of the novel, and perhaps Sugar’s oeveure in general.

The PLO thugs reveal that “Morris” is part of a team of foreign mercs, and each member is being given a female minder – and of course it’s a sexy Arabic babe. Yelinga’s is named Marta and our boy is checking out her “large breasts” posthaste. Sugar doesn’t seem too privy on the workings of radical Muslim terrorists, as he has the PLO crew drinking champagne in a toast to “Morris.” But it conceals a knockout drug, and Morris wakes up on a plane bound for Mexico. Turns out his PLO contact Ald wasn’t as trusting of Yelinga’s story as he claimed; this even after Yelinga has killed a captured CIA man to “prove” he was really Morris. In reality, Yelinga was putting the poor tortured bastard out of his misery.

One of those arbitrary action scenes occurs here, and indeed is the incident depicted on the cover; the contact at the private airfield in Mexico turns out to be a hijacker, one who has incorrectly guessed that the secret cargo coming in on this chartered plane must be some sort of valuable contraband. This leads to a big firefight, Yelinga getting badass with an appropriated grease gun. Sugar as ever gets pretty gory in his action scenes, with nice detail of exploding guts and heads. Curiously though he keeps referring to an Uzi as an “Ubi,” but that could just be the usual subpar Manor copyediting at work.

There follows an interminable sequence where Yelinga and Marta have to sneak across the Mexican border into the US (we’ve gotta build that Wall, man!). It just sort of goes on and on, Yelinga racing against the clock to get to the secret meeting house in Corpus Christi in time for the pre-arranged meeting with the other mercs. That being said, he and Marta still find the time to finally get around to screwing; Sugar doesn’t get as explicit as he did in some of the earlier Enforcer novels, but you at least know something naughty is happening. Upon their arrival at the meeting house Yelinga meets the other mercenaries hired by the PLO; they’re from all over the world, and each of them have their own female minders. The boozer Irish merc tries to swap babes with Yelinga, but our boy says no – per the usual Sugar template, Yelinga has begun to fall in love with Marta.

Yelinga though is quickly outed as not really being Morris – the nervous former CIA agent in charge of the plot hired everyone personally, thus knows Yelinga is an imposter. Not that he kills Yelinga straightaway. Instead he keeps him on ice, figuring the CIA has hatched onto the plot and sent Yelinga to spy. And it turns out the “Fireball” plot is to blow up some Texas refineries in Galveston, the team operating out of a chartered ship. But Marta, herself in love with Yelinga, frees him: “Yelinga finally realized that Marta was committed to him. To him and not to America, politics, ladies’ liberation, or any other ideal.”

The climax sees Yelinga in desperate battle against the mercs who have become his sort-of friends; that hidden belt-buckle gun comes into play in a memorable moment. But Sugar rushes through the part where Yelinga stops the refinery destruction – not even killing the guy behind the plot, who ends up going soft at the last moment and unable to proceed with his plan. Even more bizarrely, Sugar completely leaves off-page a part where Marta takes on and captures the other five female minders; Yelinga finds her holding a gun on them and easily keeping them in line. Instead the finale is more focused on the growing love between Yelinga and Marta, a love that is blown when she accidentally learns Yelinga’s an Israeli.

Going insane that she betrayed her people over a “filthy Jew,” Marta has to be pulled kicking and screaming out of Yelinga’s hospital room. This after she’s spit in his face and tried to claw at him. For his part Yelinga takes it all quite pragmatically, figuring theirs was a love that could never last…then he starts to think maybe it could last, at that. Marta, thanks to his request, is to be given a US citizenship and a clean slate, given her aid in stopping the Fireball plot, so who knows, she might cool off after a time.

Doubtless Marta will never be mentioned again, anyway, as there were only two more volumes in the series, and if the first two are any judge, they might feature a different protagonist than Gershon Yelinga. Overall though I enjoyed The Fireball Assignment, but it could’ve used a little pruning.
Posted by Joe Kenney at 6:30 AM

Great review, as always. I can’t quite make out the artist signature. Is it a George Gross cover?

Thanks, guys! Bob, if I'm not mistaken...I think it's Bruce Minney, and I think he did all 4 covers. I'm pretty sure that's his signature on the bottom of each; at least, it looks like the Minney autograph I've seen on his other work, with that big "i" sticking out.

Thanks, Joe. I should have remembered. I checked in the book about Bruce Minney’s work and the first two in the series are listed as his. If you can see the same signature othe other two, then all four are confirmed.

A little late, but that's not a Gross cover. I know his style VERY well from his awesome 'Edge' work.
Interestingly, Minney took over the 'Edge' series after George bowed out.

Bob, I checked, and unfortunately the last two volumes don't appear to have a signature on the cover paintings. This might be why those two aren't listed in that Minney book, though to my eye they clearly look like his work. All four volumes appear to have covers by the same artist, so maybe for the last two books Manor just cut off the part of Minney's painting with his signature? Volume #4: The Alps Assignment in particular is kind of funny because it almost looks like "Judd Hirsch: Action Hero" on the cover!

Check it out: The Alps Assignment

Thanks, Joe! I looked at #3 and think that could be a Bruce Minney cover, but I'm skeptical about #4. That looks like a different artist to me. (Though I could be wrong.)

Yeah, #4 is a poser. Those look like Gross hands, but the giant head is just odd.
It also looks trimmed/zoomed.