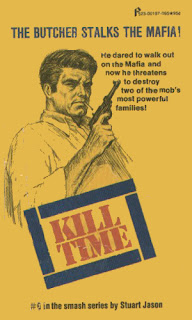 The sixth volume of The Butcher follows the same template as the previous five, once again courtesy James “Stuart Jason” Dockery, whose bizarre writing style is impossible to miss. I’d love to know more about this guy, but information seems less than scant. I also wish he’d been a bit more experimental in his Butcher manuscripts instead of turning in the same story, again and again.

This one offers a few new quirks: for one, we learn in a prologue the history of our godlike hero, Bucher, nee “the Butcher,” and currently “Iceman” for the top-secret intelligence agency White Hat. He was deposited as a newborn on the steps outside a church in Knoxville; Reverend Isham Green, a roaring drunk, happened to be reading a book on Church notables when the government clerk came by to name the baby, and the book happened to be on the page about Bucher, a famous 16th Century botanist or somesuch. The reverend was too drunk to realize he’d just given one name for the child, and the government clerk was too bored – so “Bucher” it was, and nothing more.

When he was a young boy Bucher ran away from the orphanage and ended up in Chicago, where he befriended the son of Tino Oragio, a kid Bucher’s age who was dying of leukemia and who looked upon Bucher as his brother. Tino Oragio meanwhile was the head of a newly-formed crime syndicate. When the boy died Bucher basically became Tino’s new son, going up in the ranks of the syndicate until he was a bigwig himself. We learn that Tino was gunned down 11 years later, when Bucher was 21, and from there our hero went on to even greater Syndicate heights until he had the famous bout of conscience which resulted in his quitting the Syndicate and eventually becoming an agent for White Hat.

That taken care of, it’s on to the Butcher template as we know it. Bucher’s in New York, on the latest case, and per the norm being hounded by a couple of freakish Syndicate gunners out for the reward on his head. Leading them is Coke Leedoe, a rat-faced ghoul who, in the usual grand guignol-esque vibe of the series, is known for crucifying his victims and flaying off their skin. Dockery actually tries to build up tension here, with Bucher surrounded by six gunners, and wondering if he’ll survive – as if the author thinks those of us who read the previous five volumes don’t understand that Bucher is practically God with a gun.

For once the elderly director of White Hat is on the scene, wielding an EX-M27 experimental machine gun which he doesn’t even use; cagey foreshadowing, as Bucher later uses this very same gun in the climax. Bucher takes out all six gunners before they can even fire, all while the director watches in satisfaction. Strangely, the director insists that Bucher allow the police to arrest him, to avoid more of a mess, so White House can spring him – cue the usual scene of the crusty police flunky getting his mind blown over how he has been ordered to let a notorious criminal like Bucher go scot free. However for once this time we don’t get the “illegal for God to own” bit about Bucher’s silencer.

The director gives Bucher his latest task: to prevent the “Uccidere Ogni” (aka “kill all”) that depraved, sadistic, simian Big Ugo Ugheri is trying to wage between his Syndicate family and the Talaferro family. The mere thought of Ugo makes Bucher have nausea – as usual he knows the guy from his own Syndicate past – and he considers Ugo “the worst of the lot by far.” Anyone who has read any previous volumes knows this is quite a statement. And Ugo truly is a horrific creature, a mass of muscle whose entire body is covered by hair, save for around his eyes; he likes to cage women, make them go insane, and rape them at his whim. But as usual with Dockery, he keeps this monstrous villain off-page until the very end of the book.

Bucher’s job is to find lovely young Theresa Talaferro, who Romeo & Juliet style plans to marry young Mark Ugheri, a union which would end the Uccidere Ogni and unite the families. But Ugo doesn’t want this, and Theresa has disappeared, last seen in familiar Butcher stomping grounds of Atlanta, where she was spotted with immigrants Jose and Francesca Hiacha. Bucher heads there promptly, even thinking back to the events of #1: Kill Quick Or Die and how he broke the local operation of Big Sid Lujac.

Action is infrequent, and follows the usual template: bizarro Syndicate flunkies tail Bucher, try to get the drop on him and collect the bounty, and Bucher summarily disposes of them with his silencered P-38. But Bucher sort of acts the fool in this one, practically falling in love with a woman to the point that his guard, for once, is totally let down. After getting zero info out of Francesca Hiacha, other than seemingly-unconnected info about a leftist anti-American party based out of Guatemala called the Contrados, Bucher ends up running into a young assistant theater director named Gretchen who has a top ten figure (“truly a priceless rarity of her sex”) mixed with a “comically ugly face.”

Dockery has a grand old time describing how ugly indeed Gretchen is, but she is otherwise lovely and has maintained her schoolgirl crush on Bucher, even keeping a few scrapbooks of his exploits. She insists that Bucher come back to her place to hide out, and as per usual with these stories, Bucher has no leads and thus nothing to do, so he accepts the offer. Also as per usual, Dockery keeps the ensuing sex off-page. Indeed, Dockery is a rarity himself, at least in the world of men’s adventure authors, in that he rarely ever exploits his female characters – there is seldom if ever much salivating detail on “supple breasts” and whatnot, and, at least for me, his material with Bucher’s conquests each volume have almost a clinical feel.

On page 95 we get the expected plot switch – Whte Hat says skip the Ugheri-Talaferro jazz and head to Guatemala, because the big threat now is that Big Ugo got hold of an experimental weaponized fungus, created by Mark Talaferro (who happens to be a biochemist!), and he has sold it to the Contrados (remember them?), who no doubt will use it to destroy the US. Francesca Hiacha informs Bucher that her brother might be involved in this as well, and also if that Bucher goes to Tatzl, Guatemala, headquarters of the Contrados, to watch out for the Kechecotl Indians: notorious headhunters who nonetheless prophecize that a white man will impregnate one of their women with the Kechecotl messiah(!).

So who will be surprised when Bucher, clad in tweed outdoors clothing(!) and armed with C-4 and that EX-M27 gun, runs smack dab into these very same Indians not even an hour outside of Tatzl? But though they surround him, they smile in welcome. Strange shit here, as Bucher meets two captive westerners, each who have been here several years and who consider the place paradise. More goofy but expected stuff: Bucher just so happens to speak ancient Mayan(!) and easily converses with the Indians, who unexpectedly take this as a surefire sign that he is the prophecized one. Meanwhile the native women are described as squat and ugly and Bucher “harbor[s] no inclinations for shagging any of the Kechecotl women.”

Again reflecting on a previous caper – namely, how he found himself in a similar predicament in North Africa with a tribe of warriors in #4: Blood Debt – Bucher repeats history by bluffing his way out of this enforced stud service and putting together a band of warriors. The Indians hate the Contrados, who lurk nearby – but it’s another Dockery fakeout, as when they get there the action’s mostly off-hand as the Contrados are gone, the fungus virus taken with them. And guess where it’s gone? That’s right – back to Atlanta!! Again, it is clear that Bucher is cast in a sort of purgatory, reliving the same events over and over and over – it’s a recurring staple that the climactic events occur in one of the previous locations Bucher visited in his fruitless wanderings. Oh, and the entire Kechecotl subplot is abruptly dropped.

Meanwhile, in yet another recurring element, this volume’s leading lady has appeared as deus ex machina as possible; young Gretchen, who has chartered a plane and come down to Tatzl, due to her love of Bucher. Our hero has more off-page sex with the horrifically ugly but incredibly built babe, only to discover next morning that “Gretchen” is really Theresa Talaferro, who disguised her lovely face with makeup! She professes her love to Bucher, claiming the “Gretchen” scam was a way to avoid her Syndicate family, and also that the marriage to Mark Talaferro was itself a sham, as he plans to marry some Sicilian girl and thus the family war will be averted(!). Despite her young age of 18, she vows to Bucher that she is now “his woman,” like it or not.

The final scene has Bucher staging an assault on the Contrado HQ in Atlanta, where he finally comes face to face with Big Ugo in his room of caged, psychotic beauties – almost a prefigure of TNT #1. The grand guignol vibe continues as Bucher first beats Big Ugo to bloody meat with his brass knuckles, and then the psycho women are accidentally freed, and then they converge on Ugo and eat him. However the biggest shock is this – Theresa Talaferro survives the novel!! I figured it would be a given that she’d turn up in Big Ugo’s lair in the finale, his latest caged victim, but for once Dockery foregoes the usual template and Bucher’s latest bedmate lives through the novel. The last we see of Theresa, she’s in Atlanta and tells Bucher she’ll be waiting for him. We’ll see if she appears or is even mentioned next volume.

I’m on the fence about The Butcher. There’s something I really like about it – the sadistic, whackjob freaks of Dockery’s Syndicate are always fun to read about – but the repetitive nature of the stories kind of sink it. And I always find the stuff with Bucher being hunted more interesting than the latest “spy caper” he’s been sent on. As I’ve mentioned before, what’s most frustrating is that Dockery can write, so you expect more of him when it comes to the plotting. If he’d backed up a bit on the dark comedy and treated it all slightly more seriously, I think he would’ve had the best Pinnacle series of them all. But instead he’s content to basically write the same tale over and over again, which ultimately means that taking long breaks between volumes makes for the best Butcher reading experience.

With no little effort Bucher made himself look over the big room once more then he turned tiredly from the gory scene. Wearily he made his way toward the door through which he had entered, the bitter-sour taste of defeat strong in his mouth.
Posted by Joe Kenney at 6:30 AM