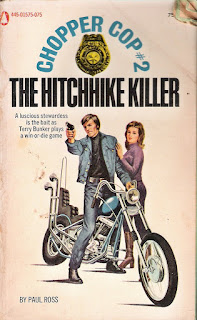 Fortunately, the second volume of Chopper Cop is the last one to be written by Dan Streib; one can almost imagine series producer Lyle Kenyon Engel putting down Streib’s manuscript and immediately drafting a letter of termination (not that he wouldn’t still send it to Popular Library – there being a deadline to meet and all). For once again Streib fails to grasp the gist of the series plot, turning in a slow-moving murder mystery that could just as easily feature a 90 year-old widow as the protagonist.

As we’ll recall, the titular “Chopper Cop” is 27 year-old Terry Bunker, who despite the cover image has “slightly long brown hair and muttonchop sideburns.” He’s based out of California and basically answers to the Governor only, though he reports to “stupid chief” Raymond Haggard, with whom Bunker has a venemous relationship (Haggard refers to Terry as a “long-haired ape”). We’re often informed that Terry’s “craggy looks” are appealing to the ladies, and he’s racked up quite a healthy score-count in his day, with the tidbit that at one point he even had to hire a secretary to keep track of all the women calling for him.

Not that we get much of that, this time. No, Streib once again must remind us that Terry is “lonely;” as I mentioned in my review of the first volume, Terry Bunker is altogether womanly, at least when compared to the average men’s adventure protagonist. He’s constantly moping or brooding, and he’s more often afraid than not. So far as the babe magnet quotient goes, there’s a part early on where he runs into Haggard’s sexy secretary, with whom Terry was once involved, and Terry thinks to himself that, while the lady is suitably hot and being with her was fun, she wasn’t able to quelch “the loneliness inside” Terry. Oh, brother!!

Streib makes vague references to some woman in Terry’s past, one who was apparently killed sor something, and Terry’s never been able to get over her. Streib doesn’t elaborate, and I can’t recall if this woman was mentioned in the previous book, but as someone once said, “What difference, at this point, does it make?” This was it for Streib on Chopper Cop and I highly suspect the co-authors of the next one (which was to be the last) won’t dwell on all the maudlin bullshit and just deliver a fun book about a chopper-riding cop. At least, here’s hoping they will.

Streib does make Terry suitably rule-breaking – but to the point where he’s mostly an asshole. When heading into Sacramento to meet with Haggard on the latest assignment, Terry, for no reason at all, begins taunting his fellow cops – none of whom realize biker Terry himself is a cop – and leads them on a chase through the city streets, with the outcome of Terry being arrested on the steps outside the capitol building. Chief Haggard has to come out and admit Terry is actually a cop. One begins to understand why Terry is so hated by his brothers in blue.

Terry refuses to read the paper so the recent murders of three girls around California is literally news to him. We readers have already witnessed one murder in the book’s opening: a biker in a leather jacket and a “full face mask” of white plastic picks up a hitchhiking young girl named Diana Cole, gives her a lift, and takes her to an abandoned area, where the biker then runs over her. Terry learns there have been two similar murders across the state and the governor, aka Terry’s boss, wants Terry on the case, as he’s certain only the “Chopper Cop” (a title never used in the books, by the way) can prevent more murders.

Here’s the funny thing about The Hitchhike Killer. Throughout the book Haggard keeps nagging Terry to look into “the biker gangs” that are plaguing California, as Haggard and his fellow cops are certain it’s a bunch of bikers doing the killings, and not just a sole murderer, as Terry suspects. So in other words a bona fide pulp biker novel is promised in the text but denied us; Streib is determined to turn in another slow-moving murder mystery when he could’ve easily done something like The Blood Circus (which likely is what editor Lyle Kenyon Engel had in mind when he came up with the series concept!).

Because honestly, Terry’s biker aspect doesn’t factor much into the tale; he spends the majority of the narrative flying a commuter airline around California and then staying in a house with a pair of stews. Immediately upon looking at the items found at the murder sites Terry notices something the other cops missed – cigarettes from sample packages once given out by certain airlines. While Haggard keeps pressuring Terry to look into those biker gangs, Terry instead flies around with a regional plane that goes to the three areas the murders occurred – and sure enough, the crew reveals that those cigarettes are no longer given out due to “health concerns,” but there’s so many of them left over that the crew has open access to them.

So basically Terry’s already solved the case…someone in the crew of this very plane killed the three girls. We even learn that all of them, pilots and stewardesses alike, are biking enthusiasts! But Terry shoots the breeze with them, smoking cigarettes in the cockpit(!), and here we meet the incredibly small cast of characters Streib gives us for the duration: co-pilot Paul Dunn, Terry’s instant prime suspect; super-sexy blonde stew Lisa; and Lisa’s roommate, equally-sexy brunette stew Chris.

Terry has an instant thing for Lisa, but we’ll recall that Terry is more than just virile lust; he thinks Lisa might be “the one.” (Oh, brother again!) He thinks there’s equal sparks, thus he’s crestfallen when it turns out Lisa is having an affair with Paul, who is married. Instead, Terry goes back home with the stews and ends up boffing Chris, who doffs her top and says “Announcing Twin Mound National Park.” Streib doesn’t get too explicit in this or the few other sex scenes, though he does add the memorable bit that a climaxing Chris starts screaming for someone named “Joey.”

But mostly Terry just tries to put the moves on Lisa, who is alternately interested and stand-offish. Occasionally he tracks clues, visiting the various murder sites and putting himself in the minds of the victims, complete even with a moronic scene where Terry runs along the desert, tracing the footsteps of one of the murdered girls, and only stops when he notices his fellow cops laughing at him(!). Chopper Cop, baby!! I mean the whole book is damn hilarious in how lame it is. We do finally get a bit of biker stuff when, in San Bernadino, Terry runs afoul of some teen bikers who discover the two-way radio on his chopper, call him “pig,” and beat him unconscious.

Streib from what I’ve read of him was fond of female villains, and he pretty much lays all his cards on the table with an arbitrary chapter from the point of view of “the killer,” in which the gender is cagily never mentioned. But anyway “the killer” dreams as the various girls die over and over again, unsure if they are dead in reality or if it’s all a dream. So by this point the reader is pretty certain the mystery has been figured out – the killer is a woman. Couple this with stew Chris, given to her flighty emotions, her disappearing at night, and her being near the murder locations in each instance.

We get a chase scene in the final quarter – but notably, Terry is not on his bike during it, which should be all the more indication that Dan Streib was the wrong writer for a series called Chopper Cop. Instead, Terry’s not only in a car for the chase, but he’s riding shotgun as a fellow cop drives! They’re chasing after Paul Dunn, who turns out to be innocent – Chris, meanwhile, has been uncovered as the villain, killing the girls in vengeance for a boyfriend named Joey who was sent to prison on a rape charge.

Terry finally gets on his bike for the finale, high-tailing it into the desert, where an oblivious Lisa is going to pose as a hitchhiking decoy for Chris, in one of Streib’s more belabored and unbelievable setups. Terry’s desperate to get to her in time, as Terry has finally gotten to act upon his “thing” for Lisa, engaging the somewhat-reluctant girl in one of Streib’s somewhat-explicit sex scenes (“He did things with his hands and his tongue until she was ready” and the like). And since Terry earlier cried wolf by having Chief Haggard summon the forces on a bust of a stakeout, the chief refuses to answer Terry’s pleas this time, so it’s only Terry himself who can ensure Lisa doesn’t become the latest victim.

But our hero is such a friggin’ chump, he fails!! He gets there just in time to see Lisa’s bloodied form, having been run over by Chris, and Terry goes off in pursuit. Here Chris becomes a raving lunatic before driving herself off a cliff, all while “the Chopper Cop” just sits there like a lummox on his bike. And meanwhile we never learn if Lisa even dies…Chief Haggard, who did in fact send a squad car after all, has her sent off to the hospital, and tells Terry “if she lives” it will only be because Terry got to her in time…

And here Streib ends the tale, on a downbeat note that was typical of the grindhouse biker fare of the era, so at least he got that part right. But boy The Hitchhike Killer was a lame, tedious affair. The next one has to be better, if only for its awesome title: Dynamite Monster Boogie Concert.
Posted by Joe Kenney at 6:30 AM