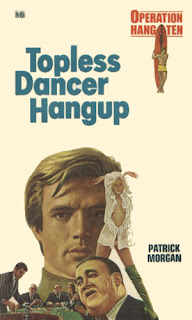 I was under the impression that George Snyder wrote all ten volumes of the Operation Hang Ten series, but then Justin Marriott kindly sent me a scan of an article Snyder published in a 2005 issue of Paperback Parade where he claimed that he had only written the first five volumes, with no knowledge of who wrote the others. Then to confuse matters even more, Snyder himself left a comment on a revew of this very novel at The Ringer Files, where he stated, “I wrote ten of them…other writers came later after I walked away from the series.”

So what the hell? Did he write five or all ten? I could see him forgetting when he wrote that 2005 article that he’d written one or two volumes, but to forget he’d written five novels? But then, so far as his comment on the Ringer Files goes…there only were ten books in this series, so what other writers could there have been? All very confusing, and all likely moot, as having read this seventh volume* of Operation Hang Ten, I have to say it’s certainly the work of Snyder – which would imply his comment on Kurt’s blog was more accurate than his 2005 article, and that Snyder did in fact write all ten of these books and not just the first five.

It has the exact same vibe as the previous volume I read, #3: Deadly Group Down Under, with a small group of characters and a hardboiled pulp sort of feel. This volume again proves that Operation Hang Ten is more “Fawcett Gold Medal” the “surfing meets spy-fy” hijinks promised by the series concept. Other than one or two sequences where surly hero Bill Cartwright surfs or races his Hemi-powered Woody, the series feels almost exactly like a grim and gritty private eye yarn. Even the cast of characters is whittled down to just a handful, something I’ve noticed is a recurring motif in hardboiled pulp, and the action is mostly comprised of brutal fistfights.

Another indication that this is the work of George Snyder is that Topless Dancer Hangup features that strange tendency of his which I have mentioned before. Whereas the action scenes in a Snyder novel are chaotic, harried, and over within a paragraph or two, the guy consistently over-details comparitively trivial acts like the hero trying to sneak into a building. Just as in The Defector, while the action scenes are over and done with in no time, we will read a couple pages of Bill (as Snyder usually refers to his hero) climbing through a window and trying to lower himself safely to the ground, etc. There are two such sequences in the book, and Snyder’s the only men’s adventure writer I know of who consistently does this – personally I’d rather read a few pages of a shootout instead of a belabored explanation of how Bill jimmies open a window, slides in, and tries to figure out where he can safely land without causing himself injury or making any noise.

Anyway, I enjoyed this one a lot more than Deadly Group Down Under. Bill’s customary opinions on this or that are a bit toned down, and Snyder focuses more on the noirish feel. But still, it’s practically the same book. It seems to me that each of these Operation Hang Ten novels are just noirsh pulp-action yarns with plots that center around a missing or murdered young woman, and Topless Dancer Hangup has Bill venturing to Hawaii to locate a missing Hang Ten operative named Sandra Denny who is the titular topless dancer; she has disappeared with ten thousand in Hang Ten cash along with a microfilm she bought from a Cuban refugee, which purports to show the locations of Red China-funded missile silos in the Cuban hinterlands.

I was unduly harsh on Deadly Group Down Under; it took Kurt’s above-referenced review to make me realize what I’d missed: that Operation Hang Ten is really just a men’s adventure variation of John D. MacDonald’s Travis McGee novels, only in third-person (though Snyder’s prose as ever feels like first-person), and with a 24 year-old surfer-spy replacing MacDonald’s “knight errant.” I wonder if this is what series creator Lyle Kenyon Engel envisioned from the start. The similarities extend even to the “wounded birds” Bill encounters each volume, many of whom meet grisly deaths as demanded from lurid ‘70s pulp.

So, while my comments in that earlier review about Bill’s “chauvanism” and “misogyny” (two grossly overused words in the victim culture that is modern American society) are for the most part still valid, Bill’s Cro-Magnon views are tempered this time by…you know, who cares? It just didn’t bug me nearly as much this time, maybe because it just didn’t get as much in the way of the narrative. This time we just get periodic musings on hot secretaries “swishing” their behinds to and from work while Bill eats burgers and watches them from inside a greasy diner (Bill only seems to eat burgers, by the way).

We also get periodic reminders that women were designed to please men. But the most venomous musings are directed more toward the increasing commercialization of Hawaiian surfing spots and how parts of Hawaii will no doubt look just like Burbank in a decade. I’ve yet to read a Travis McGee novel, but it’s my understanding they’re along the same lines – weary cynicism about the encroaching shittiness of the world mixed with ruminations on women. All the same here, if a bit more brutish.

I still don’t buy Bill Cartwright as an action hero. For one, he’s too damn young, for me at least…I wrote elsewhere that I think these men’s adventure protagonists should be grizzled Marlboro Men-types, in their thirties at least….but more importantly he’s kind of a chump. Regardless, we’re informed that Hang Ten boss Jim Dana considers Bill his best operative – which I think is less a commentary on how great Bill is and more of a commentary on how bad the other Hang Ten operatives must be.

But Bill’s called away from his latest steady lay, a good-looking 19 year old surf “bunny” who has lived in sin with Bill for the past three weeks in his high-tech trailer, which as we’ll recall is all run off a computer that mostly just whips up Scotch and sodas for Bill. But our hero is getting sick of how “the girl” is falling in love with him and clearly wanting to marry him; more damningly, she is a neat freak. So when Bill gets his summons to Hang Ten HQ, he throws a “neatnik” tantrum and the girl storms out of his life, just as Bill hoped she would.

Later Snyder softens this a bit by having Bill “sniffling” as he sits alone in his trailer, and it’s intimated that Bill really broke it off with her because he can’t get that involved with a woman; his life is dedicated to eradicating “the lice” of the world. There are parts here and there later on where Bill will mull that his trailer is now “haunted” by the girl’s ghost, but by midpoint through the novel he’s checked out more ass-swingin’ secretaries and ass-baring surf bunnies and has pretty much forgotten about her. That being said, Bill does practically fall in love with another young lady during the course of the novel.

The book is really a private eye thriller; forget any “Surfing James Bond” expectations. Bill heads to Honolulu, as ever having his Woody and his trailer shipped over as well, and goes about scoping out the scene while dealing with the smallscale cast of lowlife characters. He also kills a few pages hitting on a surf bunny named Sue in a subplot that goes absolutely nowhere, mostly so Snyder can provide a humorous scene in which the two openly discuss their intention to have sex in front of a few shocked fellow diners, but regrettably cannot as Sue has not taken her pill that day. The two make a date to screw the following day(!), but “The Cartwright” (as Snyder sometimes refers to his hero, I kid you not) forgets all about poor ol’ Sue.

Rather, the “Cartwright chick” this time around is Marie, a friend of Sandra Denny’s and a fellow topless dancer. There’s a cool late ‘60s vibe bit where Bill checks out Marie dancing in the club, with psychedelic lights playing over her half-nude form. Bill practically falls in love with her, leading to the novel’s one and only sex scene, which is fairly explicit, in particular noting a “small, circular, wonderful movement to [Marie’s] body” that just about blows Bill’s mind. Marie is the only one who knows where Sandra Denny is, and even that she’s a Hang Ten agent, and sets Bill up to meet with her.

As for Sandra Denny, she remains off-page for the duration, being hunted by various people. Bill tracks down her mom, an over-the-hill hussy who comes on strong to our disgusted hero, and also questions Don Arlen, a dark-haired lothario who claims to have been Sandra’s steady boyfriend. (“Were you getting into her?” being an example of Bill’s rather blunt questioning method.) Mostly though Bill runs afoul of three lowlifes from another local club, two of whom shadow Bill throughout the novel, leading to the few (and pretty brief) action scenes.

In fact nothing really comes to a head even though some minor characters are killed off-page. Bill mostly just bitches that he’s getting nowhere in his half-assed investigation and goes back to his trailer to make despondent calls back to HQ and have his computer whip him up some Scotch and soda. It’s only when Marie is captured and put in a sort of dungeon that the novel really kicks into gear, though to be sure it the material leading up to this moment isn’t exactly bad or anything – in fact, I enjoyed it. But I still don’t think the exorbitant prices of Operation Hang Ten on the second-hand market are justified; we aren’t talking about men’s adventure fiction gold here.

Even when Bill goes to Marie’s rescue, Snyder again indulges in his strange penchant for focusing more so on Bill’s climbing through a window and sneaking into the place than the actual action itself. And Bill proves himself again to be a klutz, dropping his .22 Magnum auto and resorting to his hands. The villain ends up blowing himself up. Once Marie’s freed, Bill basically proclaims his love to her and then gets on to the business of figuring out the plot in the last couple pages, with all of it centering around the same small group of characters we’ve been dealing with since the beginning.

I’ve got a few more volumes of Operation Hang Ten in my collection, and hopefully they’ll be more along the lines of this one. Bill’s bitchery is toned down a bit, and while not much really happens, the tone is nice and hardboiled. It’s a shame though that Manor didn’t reprint the series in full like it did with The Aquanauts; if they had, the books might be a lot easier and cheaper to acquire.