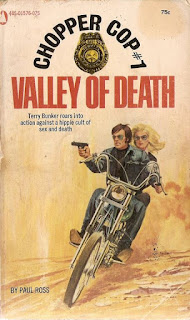 Yet another men’s adventure series produced by Lyle Kenyon Engel and his BCI outfit, Chopper Cop attempted to meld the vibe of Easy Rider with the tough cop genre. It ran for three volumes and, at least judging from this first volume, wasn’t very successful in its attempt.

According to Hawk’s Authors’ Pseudonyms, Chopper Cop was the work of three writers: Dan Streib, who wrote the first two volumes, Valley Of Death and The Hitchhike Killer, and the writing team of Bill Amidon and Nat Freedland, who collaborated on the third volume, the awesomely-titled Dynamite Monster Boogie Concert.*

The series protagonist is Terry Bunker, 26 years old and described as “craggy, but handsome.” Formerly a lieutenant (the youngest police lieutenant in the country, we’re informed), he was spotted by California’s “colorful” governor, who retained Terry to be his own personal go-to guy. Now Terry is an agent for the State Department of Criminal Investigation, and gets his missions directly from the governor, though he reports to Chief Haggard of the Sacramento police. Terry has “longish” hair and drives a chopper – a “Rickman frame with a 659 Triumph engine” – and gets a lot of grief for his appearance.

But anyone expecting “Hell’s Angel turned cop” will be disappointed. Terry Bunker is just a regular action series-type cop and there’s nothing to differentiate him from the genre norm. Other that is than his chopper, which really doesn’t factor into this particular story much, anyway. Rather, we’re informed that most cops just don’t get along with Terry because of his long hair and his casual threads, like jeans and a “turtlenecked sweater.” What a rebel! If anything I’d say this is another indication where the book’s producer wanted something much different than what the author delivered.

Because here’s the thing about Terry Bunker – he’s kind of a wimp. Throughout the novel he’s constantly afraid; there are innumerable scenes of him taking deep breaths to steady himself and to remember his “training.” He’s also kind of womanly, as just as often as he’s afraid he’s lonely…! There are many parts where he’ll wish someone else was with him, as he feels so alone. I mean what the hell kind of a shit-kicking men’s adventure protagonist is this? And when he does get in fights he’s usually just ducking and shooting and hoping he doesn’t kill anyone. For that matter even his weapon of choice is blasé; it’s just a standard police-issue revolver.

In a 1981 interview with Will Murray, which was published in Paperback Parade #2 (1986), Lyle Kenyon Engel had this to say about Streib:

Dan Streib, oh God, Dan Streib I see is with Chet Cunningham. I knew Dan, I used him on another series, and then I stopped using him because he wasn’t any good.

Engel mentions Streib being “with” Cunningham because the two authors collaborated on a volume of Nick Carter: Killmaster titled Night Of The Avenger. Engel’s reference to “another series” he used Streib for must be Chopper Cop, because after this Streib was on his own, publishing under various house names for different publishers, like the Death Squad and Kill Squad books. And while Engel’s off-hand criticism might sound harsh, I can’t say I disagree with him.

What’s interesting though is that Valley Of Death presents Streib as filtered through the editing/producing of Engel. The writing here is a little more polished than that in the Kill Squad or Death Squad books, ie the ones Streib did without Engel. But it seems pretty clear that Engel envisioned Chopper Cop as being more about the concept he’d come up with, whereas Streib turned in a rather standard mystery novel, one graced with a lackluster protagonist at that.

In fact, parts of Valley Of Death are like a Gothic novel, except instead of a virginal heroine we have a “craggy, but handsome” long-haired cop for a protagonist. And at 207 pages of big print, the book at least moves at a snappy pace. This caper has Terry investigating a “hippie sex cult” that operates out of Death Valley; three beautiful young Californian women, each of them members of wealthy families who became members of the cult, have committed suicide in unusual ways. But now, a few weeks later, their parents are receiving ghostly phone calls from their deceased daughters, asking for half a million dollars so they can be “resurrected.”

The Gothic stuff mostly plays out in the palatial home of Annette Caldwell’s parents; one of the three suicides, Annette apparently jumped off the Golden Gate Bridge, her suicidal act witnessed by a random motorist. But the beautiful young girl’s ghost seems to haunt the home; during his brief stay there Terry sees a ghostly female form rushing from various scenes, hears her playing an organ in the house, and he even kisses her in a strange sequence. Meanwhile Terry’s being constantly propositioned by Penny, Annette’s equally-pretty but virginal 19 year-old sister, who is a fellow biking enthusiast.

There isn’t much action to be found. After a few ghostly visits Terry heads over to San Clemente, where another of the “dead” girls has returned. This leads to a scene where Terry goes out into a desert cemetery in the middle of the night for the money drop off, but it leads to an assassination attempt, culminating in a quick motorcycle chase. But really Terry’s chopper knack isn’t much highlighted by Streib. You get the impression that Engel came up with this cool idea and handed it off to a dude who didn’t know what to do with it.

The cover proclaims a “hippie cult of sex and death” but it must’ve sat out on the actual book, as the cult here is lead by a dude named Arnold Van Doren who appears maybe a page or two and doesn’t offer much. The “sex and death” angle is woefully underplayed, the farthest it gets being a sort of orgy ceremony Terry and Penny walk in on in the middle of the desert, but Terry flashes his badge and the hippies disperse. But the whole cult deal is really just a snow-job, as Valley Of Death is more about a typical blackmailing scheme.

The climax returns to the Gothic tones, playing out in an old mansion somewhere in Death Valley. Here Terry, once again alone (and afraid), sneaks up on the big house in the middle of the night, only to be frightened by an organ that plays in the otherwise-deserted place. (Turns out to be a player piano.) Streib has used female villains in his other books I’ve read, and he does so here too, though you’ll see her “surprise reveal” coming a mile away. But she’s not a bloodthirsty villainess, and the finale, tying in to the womanly feel mentioned above, features the poor girl crying on her father’s shoulder!

Valley Of Death is not an auspicious beginning for the Chopper Cop series; action is minimal and sex and violence are nonexistent.  Let’s hope that Streib’s next one is better. Failing that there’s always the third volume, which should be better if for no other reason than it’s not by Streib.

*Lyle Kenyon Engel also produced another book credited to “Paul Ross” which was not associated with the Chopper Cop series. It was titled The Assassin (1974, Manor Books) and was one of those standalone BCI crime paperbacks; it was written by William Crawford.
Posted by Joe Kenney at 6:30 AM

I wrote about all three Chopper Cop volumes:

I think I liked this volume better than you did, though none of them are groundbreaking. Thanks for identifying the authors. I'll have to update my posts. DYNAMITE MONSTER BOOGIE CONCERT is the greatest title ever...and is actually accurate!

I saw and picked up this book based on Marty's reviews, but have not read it yet. ... I noticed that I have another Dan Streib book: Hawk #5, California Shakedown (Jove, 1981). But, again, no idea if it is any good.

Streib did a 14 book series called HAWK for Jove Books. I often ALMOST bought these, but inn the end never did, so I can recommend them one way or the other.

I had never heard of "Hawk’s Authors’ Pseudonyms". Interesting.

Have several friends who write books. We also send books back and forth, often with a note stuck to the cover apologizing for the fact that the book we're sending is good, but it's no "Dynamite Monster Boogie Concert".