The Vigilante #2: Los Angeles: Detour To A Funeral 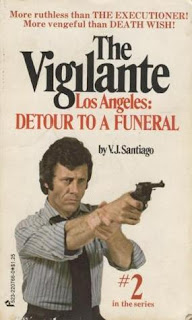 Picking up immediately after the first volume (and published the same month, too!), Los Angeles: Detour To A Funeral continues the story of Joe “The Vigilante” Madden, whose wife Sara was murdered not even a week before the events of this novel. But as we learned in that first book Madden has “found his own way” of dealing with his grief.

As I recall, New York: An Eye For An Eye ended with Madden heading out onto the streets of New York for one last go-round before leaving on a business trip for Los Angeles; as we meet him, he’s out on those streets, blowing away a pair of would-be “thrill killers.” Madden has gone total “Charles Bronson in Death Wish,” outfitted in a trench coat with upturned collar, his only weapon a .38 revolver. And let’s not forget his horrible facial scar, which still hasn’t fully healed – he just got it a few days ago, after all.

Returning from the first volume are the Grossman brothers, obese bastards who live up to their surnames and who are clients of Madden’s engineering firm, demanding clients at that. They run a printing firm out of LA and start blaming and threatening Madden as soon as he arrives the next day. Author Robert Lory wisely doesn’t waste much time with details of Madden on the job. Instead our hero just puts the prickish brothers in place, forming a sort of bond with their assistant, a guy named Prell.

Rather, Lory puts the focus on Madden’s vigilante pursuits. On his first night in LA he has a cabdriver drop him off in Watts; soon enough Madden encounters another would-be mugger/murderer, whom he dispatches with his .38. Madden’s brought the gun with him by stowing it in his package on the plane; there’s a very eerie 9/11 prescience here as Madden asks an airline rep how weapons can be transported, and she says that as long as any sort of weapon is stowed with the check-in bags, the airline could care less what you bring on a plane. This she says is so as to divert bombers. But what, Madden asks, could an airline do to prevent terrorists who are suicidal?

Madden, not even a week into it, is fully committed to his vigilante life. Lory builds this theme where our hero occasionally asks himself if what he is doing is right, particularly when he becomes involved with a group of young women he saves. He wants things to be “neat” and “orderly,” per his engineering background, and getting involved with people could undermine that. But then he realizes that, had someone gotten involved the night his wife was killed on the subway, then perhaps he wouldn’t be here in LA, hunting criminals on the streets. Thus Madden gradually comes to see himself as a savior.

And he’s still merciless, too, even blowing away unarmed hoods who plead for mercy. Madden’s origin story dispensed with in the first volume, Lory is free here to get to the good stuff, with our scar-faced hero eager to put on his trench coat and plastic gloves and head out onto the streets of LA to blow away criminals. Worth noting is that Madden’s racist bent from that first volume is gone; true, he makes his first LA foray on the streets of Watts, where he kills black muggers, but otherwise there’s none of the talk of “animals” or other stuff from that first book. Instead, Madden just wants to murder anyone he deems a criminal, no matter their race – or their gender, either.

The meat of the story begins when Madden goes out on his second night, this time onto Sunset Strip. Here he comes upon a dude beating up a young woman. Madden surprisingly doesn’t kill him, but instead pistol-whips him to burger, despite the dude’s declarations of his karate skills. The girl Madden has saved is a 19 year-old heroin-addicted hooker named Koren Stuart. The story she tells Madden riles him up but good. Once a groupie for pop star Johnny O., Koren was eventually hooked on drugs and forced into prostitution. Madden swears vengeance.

In my review of New York: An Eye For An Eye, I wrote that the book came off like “a less sadistic take on Bronson: Blind Rage.” The same cannot be said of this second volume, which is just as over the top as Blind Rage, and just as good. In a subplot that reminded me of the obscure but awesome 1973 Lee Marvin movie Prime Cut, Koren and her fellow whore-captives are kept in a townhouse overseen by “Big Mama,” an obese lady who goes around in a black-and-white jumpsuit. As Lory describes her: “Big Mama, in addition to being a hefty pig in zebra clothing, was also a dyke.”

Johnny O., a paunchy 25 year-old superstar whose music is described as “a combination of acid rock and country rock, with a little folk thrown in,” becomes Madden’s personal punching bag, as do Johnny’s O.’s two henchmen, Scotty and Bruce. Madden vows to take down the man’s white slavery ring; the singer uses up his groupies and then hooks them on heroin once he’s sick of them, making profits off of their ensuing prostitution. Lory adds some action here with Johnny O. at one point sending his two men after Madden – more quick work for our hero’s .38.

There’s a bit of dramatic stuff with Madden briefly connecting with four young women he saves from the Johnny O./Big Mama sex ring: Lisa, a lithe redhead, Marie, a plump brunette, and Joane, a “fine-looking blonde.” There’s also Koren Stuart, with Madden even going to the length of calling her parents in the Midwest and having them fly over to Los Angeles to collect her. The other girls he gives some money (stolen from Johnny O.’s wallet) and sends on their various ways; when Lisa tells him she has a bad heroin habit, thanks to Big Mama, Madden bluntly tells her she’ll just need to kick it!

Lory excels though with the Big Mama stuff. In her jumpsuit she looks “like a pregnant zebra,” and the most memorable part in the book occurs when Madden goes back to her cathouse for a little payback – a scene which features Big Mama pleasuring herself with a “smooth shank of ivory,” a Playboy centerfold propped open before her! And the lady’s past the stopping point, so to speak, unable to stop working that “shank of ivory” even though Madden has a pistol aimed at her head. Lory caps off this outrageous scene in the only way possible: Madden blowing away Big Mama in mid-orgasm!

Before her memorable departure Big Mama informs Madden that her heroin supplier is a dude in Torrance named Cord. This takes us into the homestretch as Madden plots the destruction of the man’s drug supply. While entertaining, this sequence again displays how Madden is just a normal guy, prone to stupid mistakes (like taking Johnny O.’s yellow Mercedes, which could easily be tracked). He’s also not capable of mass acts of carnage, like a regular men’s adventure protagonist. He’s only got five bullets left in his .38 and thus has to plan accordingly.

Oh, and you’ll be relieved to know that Madden, in his day job, is also able to turn around the profits of the Grossman brothers and take them out of the red. The dude sleeps like maybe ten hours in the entire week over which Los Angeles: Detour To A Funeral occurs. And he’s already rushing off to the next installment by novel’s end, having received another assignment from Mr. Chilton, his boss back in New York. There’s an engineer Chilton wants to hire in San Francisco, so why doesn’t Madden head on over there and interview him? Madden looks forward to killing more scum there.

With good action, dialog, and scene-setting, Los Angeles: Detour To A Funeral is even more enjoyable than the first volume, and hopefully is a sign of where the series will go. I loved it! Plus I never knew Lory was capable of such sleaze, and obviously I mean that as a compliment. The stuff with Big Mama and her heroin-hooked whores is just the most outrageous aspect – the novel is redolent with a lurid vibe, even with the tidbit that Johnny O. turns out to be a switch-hitter; cue lots of putdowns courtesy Madden.  There's no sex in the novel, to be sure, and the violence isn't overly graphic, but it's all very luridly handled nonetheless.

Lory’s writing is as strong as ever, and he’s able to pack a lot of action, introspection, banter, and sleaze into 183 pages of fairly big print. There’s no chaff at all, and somehow Lory succeeds in turning in a lurid tale that also has a bit of emotional content. Long story short, I was thoroughly entertained by this novel and look forward to reading the next volume.
Posted by Joe Kenney at 6:30 AM

The translation by Dark Horse censored it and I'm thankful they did since I did not want to see a close up of an old woman's vagina.