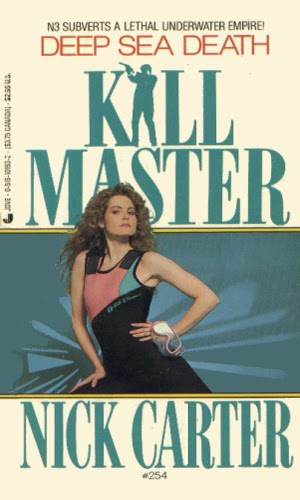 Probably my favorite volume I’ve yet read in the Nick Carter: Killmaster series (and thanks to Zwolf, whose review let me know about it), Deep Sea Death is very much in the pulpy realm, though also a bit anemic so far as the exploitative stuff goes. Apparently this one was written by Jack Garside, an author I’m not familiar with. His writing is so spare though that the book almost comes off like an outline.

The novel’s also pretty much an appropriation of the James Bond movie The Spy Who Loved Me, except instead of a nuclear vessel disappearing it’s an oceanography ship owned by the Foundation for Ocean Research, which is based in Canada. In the endless stretch of the Pacific Ocean these FOR aquatic researchers are investigating underwater caverns for signs of ancient life. Garside has done his research, quickly letting us know the many dangers of this hazardous work.

Leading the group is Dr. Barbara Wall, a brick shithouse blonde who per tradition has kept away from men and etc in the course of her all-important studies, though apparently she’s “allowed” herself to sleep with one of the dudes on this current research trip. But while taking a break in one of those underwater caverns, the group is brutally murdered by attackers who come out of the water, wearing unusual swimming gear that Barbara has never seen before (Garside never really does explain what’s so unusual about this gear, but then this is just the first indication of his minimal descriptions throughout the novel). Barbara survives the attack, though she’s trapped down here in pitch darkness, and that’s where we leave her for the time being.

Meanwhile, Nick Carter’s on vacation, getting laid. I should mention that Carter doesn’t narrate this time around; Deep Sea Death was published after the series returned to the third-person narrative style it began with in the mid-‘60s, and to tell the truth I prefer it. I’ve never really felt that first-person narration jibes with the men’s adventure genre. Anyway, Carter hits it and quits it just in time to receive the call for his new mission. His usual boss Hawk is off on business (and never appears this volume), so control of AXE has fallen to its resident Q, Howard Schmidt.

The Killmaster has to wonder why it’s fallen on him to research the disappearance of a Canadian research vessel, but what the hell. He calls in the aid of an apparent old friend with the awesome name Stonewall Kuhu, a professional scuba diver who lives in Waikiki. My friends, Stonewall Kuhu is one of the most pointless characters I have ever encountered in a novel; he shows up for but a handful of pages, says a few lines, and is dead within two paragraphs of his introduction, and it’s a pointless death at that. I couldn’t figure out why Garside even introduced him in the first place.

But regardless, superman Carter just needs Stonewall’s help, and no one else’s, so after the two are suited up with Schmidt’s latest in the line of scuba technology, they just sort of ply around the Pacific in a high-tech craft that’s disguised as a dinghy, searching for the lost vessel. Again, it all has eerie connotations to the MH370 mystery of the modern day. It doesn’t take the pair long to find the cavern Barbara Wall’s people were researching, complete with signs that the scientists were ambushed and killed.

As soon as they discover this, though, Stonewall dies – and he isn’t killed by those mysterious attackers. Nope, he gets caught in a narrow crevice, slammed out by rising waters, and plunges to his death on the cavern floor! And that’s it for Stonewall Kuhu. His introduction is so greatly built up that his narrative non-presence and bizarrely anticlimactic death come off as laughable. Anyway Carter soon finds the corpses of those scientists, and then he himself is attacked, by a legion of scuba-outfitted commandos who each stand over six feet tall.

Gradually Carter discovers where they’ve come from: an underwater city built within these ancient caverns. Overly attractive scientist-types of both sexes walk around the ultramod corridors of the place, and it’s funny that Farrah Fawcett is still Garside’s benchmark for sex appeal, as he compares the women down here to her. However these people also look overly happy, of the glazed, dazed, and drugged variety, but before Carter can research more he is per tradition caught so he can meet the boss of the place and receive the mandatory “when I rule the world” speech.

The boss turns out to be Xanax Zendal, a power-mad scientist who has corralled all these other scientists down here with promises of wealth, power, and beauty (he gives them free plastic surgery or something, hence all the photogenic faces). It would be great if there were more to Zendal, but Garside does precious little to bring him to life, and barely even describes what the guy looks like. It seems like all Garside did was come up with an appropriate “mad genius” name and left it at that – and as for the goofy name, Carter says it sounds like it comes from “some kid’s sci-fi comic.”

Yet for the minimal description and plot-building, you really can’t complain about a book that already has its hero in the villain’s underwater lair within the first forty pages. Not only that, but here we learn that Zendal’s security force is made up of clones of Zenda’s own creation – not just regular clones, either, but “bionic clones!” He also reveals that there are male and female clones, but again Garside does nothing to bring them to life, never even really describing what they look like.

After informing Carter of his insane schemes to rule the world, Zendal invites our hero to dinner(?!), but Carter says he has to take a piss first and so is escorted to the bathroom by a few clones. Here is the first instance in a Killmaster novel I’ve read where Carter employs Pierre, aka the small poison gas bomb which he tapes beside his scrotum(!!). Escaping back to the surface world, Carter calls in Schmidt, who begins plying his way along the vast distance of the Pacific to reach him.

Hiding out on a deserted beach, Carter starts a fire to cook some food, and is immediately attacked by a naked blonde woman! This turns out to be none other than Dr. Barbara Wall, who has been hiding here herself these past few days. Drawn out by the smell of Carter’s cooking food, Barbara attacks the Killmaster with her impressive karate skills, but is no match for Agent N3. And after she’s had some food, she’s also no match for his romance skills, and posthaste the two are going at it. Unfortunately, Garside is purely of the metaphorical/lyrical approach to sex scenes:

Their mouths came together and each reached for the other as if being close was the most important thing in the world. Her tongue teased his lips, begging for entry, and once inside, worked at his mouth like a warm serpent of love, bent on driving him wild. She built an urge in him so quickly that neihter was interested in further foreplay. He rolled on top of her as she spread herself to receive him and found himself enveloped in a furnace that had been smoldering for hours.

She was as ready as he. The short battle and the magic of their island refuge acted as an aphrodisiac, forcing her to satisfy the heat of passion her body demanded – not minutes from now, but right away. She clung to him, moved with him, and felt a climax coming that she knew instinctively they would both share.

It welled up within them both, urging them on, more like two combatants than lovers. They rolled on the sand and fought a battle for the prize that was so close, held so much promise, and was easily within their reach.

Interestingly, Garside sets Barbara up as a true companion for Carter; despite her lack of battlefield experience, she proves herself time and again with him, and clearly falls in love with him, with Carter apparently feeling the same way by novel’s end. When Schmidt arrives with more high-tech gear, Barbara is able to convince both AXE men that she and Carter need to infiltrate Zendal’s underwater lair and attempt to free the scientists before the US Navy plows in and destroys everyone.

After more of Garside’s minimal descriptions, the two get into the complex and are both promptly captured, but not before Barbara’s able to both kill the obese chef who is brainwashing the scientists with a special powder put in their meals, but also to destroy the mind control agent itself. I should mention here that, for an announced pacifist, Barbara Wall does her share of killing in Deep Sea Death; her murder of the chef is especially dark, with Barbara dosing the heavyset man with sodium pentathol, a guaranteed heart-stopper.

When Carter and Barbara again escape – Zendal’s clones are augmented by human mercs, who it turns out are just as stupid as the clones – all hell gradually breaks loose. Zendal’s master plan is the abduction of a top secret Navy nuclear vessel that is currently heading right for Zendal’s secret lair. When the Navy brass stubbornly won’t listen, Carter and Barbara have to handle the rescue mission themselves, flinging around the Pacific on missile-firing waterskis of Schmidt’s devise – boats which themselves are miniature nuclear bombs!

The final quarter of the novel is an endless action scene, as Zendal’s minions attack the Navy ship, and Carter and Barbara attack the minions, trying to prevent them from stealing away with the nuclear missiles. Garside’s weak powers of description extend to the action scenes as well, with no gore or detailed violence of any kind; people are shot and merely fall down, or drop into the water. As mentioned above, the entire book almost comes off like the outline for a more complete book, just doling out the major incidents and developments and not shedding much light on the details.

In fact, Carter himself figures that he and Barbara have killed “hundreds” of Zendal’s clones and human mercenaries by novel’s end, but I don’t think we read about a single shed of blood. Zendal himself is giving a bloodless sendoff, if still a memorable one, with Carter activating the nuclear armament on his waterski and sending it off for the madman’s escaping watercraft. A little fast swimming and Carter’s even able to escape the nuclear explosion!

While it lacked much memorable content or graphic detail, I think I enjoyed Deep Sea Death mostly due to the fantastical nature of it all. My interests lean more toward the crazy stuff, and this particular installment of the series is definitely crazy, what with its underwater compounds and bionic clones. I just wish it was more fleshed out.
Posted by Joe Kenney at 6:30 AM

Carter's last years were rather pedestrian. I didn't enjoy one of the novels I read, especially the Jove novels. And those awful covers. In the mid-eighties Carter and the superspy fell out of favour, I think. It seemed like a relic of the past at the time. Just before the dawn of the serial-killer and the profiler.

Andy, thanks for the comment. I'd tend to agree with you -- since reading this volume I've read a few more Killmasters, from the Award years to the Jove years, and the former is clearly superior. I also read the one you raved about in your PF artcile, The Golden Serpent -- and it was great! I'll have a review of it up in a few weeks.