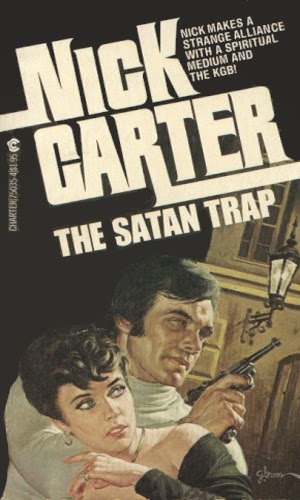 This installment of the Nick Carter: Killmaster series promises quite a lot – I mean the back cover blurb makes it sound like a bast of pure Satanic sleaze, which is my favorite kind of sleaze. And while The Satan Trap does occasionally veer in this direction, it is for the most part a bland sort of spy caper that goes in too many directions. That being said, in this volume Nick Carter poses as a demon, so at least it has that going for it.

Apparently written by Jack Canon (the same name, with one less "n," that Nelson DeMille would use for his Ryker reprints in the late ‘80s), this volume comes in at a too-long 223 pages of smallish print. Canon went on to write for the series on into its final stages a decade later, so I guess he eventually found his footing. His storytelling skills are pretty good, and he gives narrator Carter a few deadpan, hardboiled lines, but I just felt there was too much going on. If he’d stuck with the plot promised on the back cover, about a Satanist using his loyal women to blackmail political bigwigs, he would’ve had a much stronger (and more fun) novel.

After a disastrous mission in South America in the opening pages, in which Carter has to hide out while his comrades are torn apart, our narrator heads to Switzerland to meet with his boss, Hawk. From here Carter is briefed on the strange activities of the Draco cult, which is based outside of Monaco. A KGB agent was working undercover there before being found out, and now he wants to talk to Carter, whom he’s met with in the past. After a very James Bondish ski chase in the snow-swept forests, Carter learns from the dying agent that Draco is not only blackmailing influential people, but he’s apparently involved in something heavier.

The KGB man was about to bring in someone to help him: an occultist who works as a spy on the side, named Serena. (Definitely a Bewitched tribute, as later Canon even references an “Aunt Clara.”) Serena doesn’t know that her handler’s been made, and Carter doesn’t know what she looks like, but his job is to meet up with her in the predesignated location of London and go with her to Monaco. Here Canon proceeds to further muddy up what could otherwise be a lean, sleazy tale with the introduction of Komand, another dude from Carter’s past, who we learn via backstory once sold Carter out early in the Killmaster’s career.

Komand, who only works for the highest bidder and has no allegiances, is himself trying to get into Draco’s Monaco temple, called Pastoria. He has his own Serena, in an effort to hoodwink Carter, but our narrator quickly deduces this and heads off with the real one, who as expected is very attractive and lithely built. The two have a sparky relationship, constantly trading barbs, and Carter’s frustrated that he’s been hooked up with such an inexperienced agent.

Canon still denies us the sleazy stuff, with Serena instantly heading off for Pastoria – she’s been brought in by Draco to summon a demon or something – while Carter goes to nearby Monaco to get to the bottom of this blackmailing scheme. More characters are doled out. Most importantly there’s Gilda Morrow, a crone who was once a Theda Bara-style actress in the silent age; she is perhaps the most famous member of Draco’s cult, living in decadent splendor in Monaco and hosting various bigwigs who come down to check out the cult. One of her latest acquisitions is yet another actress, this one a young and uber-sexy Brigitte Bardot/Sophia Loren-type named Paulina Mendici.

Carter has further been informed that someone down here is also in intelligence; it’s not long before he learns it’s Paulina, who works for Interpol on the side. He learns this shortly before the expected sex scene; spotting each other in Monaco’s plush casinos, Carter and Paulina trade lascivious looks and flirt until it leads to the series-mandatory outcome. Canon goes more for the purple prose in the ensuing sex scene (the book definitely isn’t as explicit as the previous one I read, Target: Doomsday Island), with lots of talk of “cresting passion” and the like. We do learn though that Paulina has the greatest body Carter has ever seen, so given that the dude’s been with like a few hundred ladies by this point, she must certainly be something.

There’s a cool part where Carter joins a party hosted by Gilda Morrow at her estate, and here we see a bit of the Draco cult in action, though the man himself doesn’t appear. Instead the ceremony is hosted by LaFarge, Draco’s second-hand man, and from what Carter’s intel tells him apparently the one pulling the strings. Carter quickly notices how familiar the man seems – there follows this goofy bit where we learn that not only was LaFarge the guy who played Dracula in one of Gilda’s old films, but he’s also a gunrunner…and he was the leader of the sadistic terrorists in that opening section in South America! Talk about plot contrivances!

Anyway after getting randy from the (nondescribed) cult sex onstage, the audience is welcomed to make use of private rooms. Carter and Paulina head for one, but the Killmaster makes the poor girl moan and fake it in the dark room as he goes off into the tunnels hidden beyond. Here we learn that the rooms are monitored via infrared camera, recorded onto film for later blackmailing purposes. This apparently isn’t enough plot for Canon, though, as Carter also learns that LaFarge is trying to get into some heavy weapons selling, probably to foster a worldwide revolution or some shit.

Serena meanwhile poses as an exorcist for Draco, and Carter manages to score with her as well, Serena throwing herself at Carter during a clandestine meeting in a former brothel outside Nice. It had to be hard to write these books in first-person, because Canon has to let us know that Serena is acting suspicious here, yet due to the demands of the plot Carter comes off like an idiot because he doesn’t notice. Ie, Serena not only insists they have sex, but Carter is “pretty certain” that she keeps checking her watch throughout. And yet when Carter later goes out to his car and discovers it’s wired to blow, Serena is not the first person he suspects!

Draco doesn’t even appear until the end, despite being the sole villain listed on the back cover. He’s a raving lunatic, expecting Serena to summon a demon (which he names “Nickrobus!”) from the pits of hell, so Draco can challenge it and thus claim dominance over it and hell itself. Carter ends up posing as the demon; using Scooby-Doo trickery and smoke bombs he appears in a mask and costume, taunting Draco. This leads into the finale, in which Carter deduces that the “Untouchable Monks” who patrol Pastoria are really soldiers, and that Komand is trying to take over LaFarge’s gunrunning scheme. Oh, and Komand has someone working for him undercover, but you’ll have long figured out who it is.

The Satan Trap is just underwhelming for the most part, despite the promise of Satanism and sleaze. The Draco cult is woefully unexplored and more focus is placed on the shady world of espionage, with Carter often reflecting back on people he’s worked with and how untrustworthy they are. There is however a nice touch in a minor character, named Andre, who supplies Carter with guns and intel. Andre is able to go into a trance mode and relay information, as if he’s a different person, which makes me wonder if Canon had read Walter Bowart’s recently-published book Operation Mind Control, which was all about how MK-Ultra was used to make real-life spies just like this.

I wasn’t blown away by this particular installment, but I still have a few more volumes of Nick Carter: Killmaster to check out. Hopefully they’ll be more entertaining.
Posted by Joe Kenney at 6:30 AM

Yeah Joe I have "The Satan Trap" in my collection as well and compared to many Nick Carter books its rather weak. If you want a different slant on raising the Devil try Death Merchant #8 "Billionaire Mission" about a crazed billioniare who's trying to bring to start World War III in order to bring Lucifer to Earth.

Serena come back at least once more in the series, maybe a third time