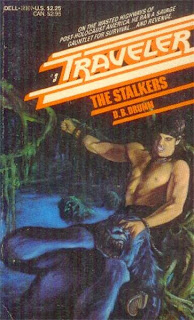 Sort of picking up from the events of the previous volume, this installment of the Traveler series, once again courtesy John Shirley, sees our titular protagonist movin’ on down the road, where he’s promptly ambushed by mutant horrors called “Bloats” which string him up with another captive and then line up for dinner.

As I mentioned in the previous review, the post-nuke setting allows Shirley to indulge in his horror fiction interests, and the Bloats are straight out of a creature feature. Radiation-spawned monsters with a fondness for human flesh, the things are downright gruesome (each of them with multiple holes in their heads – holes with little tongues), not to mention the “Mother Bloat” who oversees the litter. Traveler manages to free himself, but not before he’s hit in the head so hard he gets a concussion, and luckily a batch of survivalists from the Lake Tahoe region show up to blow away the Bloats – Traveler taking on the Mother by himself.

The survivalists, lead by a rightwinger named Kettering, offer Traveler a job in exchange for fuel and ammo. But just as Traveler’s being introduced to their compound someone breaks in and steals his Meat Wagon van. Once again the narrative becomes one long chase, as Traveler and a few of the inbred yokels who make up this compound take off in a sheet metal-lined station wagon in hot pursuit. Traveler not only wants his van back, but more importantly his antitoxin is stored in there, and the neurotoxin effects are really kicking in.

After a highway confrontation with roadrats that could come straight out of The Road Warrior, Traveler, once again solo, finally comes face to face with the person who stole the Meat Wagon. Shirley opens up the narratve here by revealing that it’s a young (and of course gorgeous) Cheyenne Indian girl named Jan. However Shirley fails to mention how exactly Jan’s tribe came to know that the Meat Wagon was going to be in the Tahoe compound, or for that matter even what their master plan was for its theft – she just mentions later that it was all in retalliation for a pillaging Kettering’s people had perpetrated upon her own camp.

But Traveler’s sick from that concussion and the old medicine woman with Jan cures him. Now he’s in yet another camp, this one populated by Cheyenes who are ruled by an old guy who used to work in the medical field before society collapsed. These guys too propose a job for Traveler – to escort Jan into a place called Drift outside of Vegas, where Jan’s brother Martin is held captive by the remnants of the US government. Turns out Major Vallone, Traveler’s nemesis, has found more containers of Neurotoxin 77, the toxin Traveler was dosed with back in ’89 before the war, and Jan’s tribe has found the other cache – Vallone wants to trade Martin for the whereabouts of this other cache of NT 77.

The narrative slowly comes together as Traveler figures he can do the job and get his vengeance on Vallone, while also destroying all of the NT 77 (which we learn Vallone is planning to spray on Kansas City, probably in retaliation to the events in #2: Kingdom Come). But meanwhile the Black Rider, that black-skinned, black-garbed biker mutant with mental powers, is busy sending assassins after Traveler. First up is a lanky black guy named Orwell who goes after Traveler and Jan in a rig, chasing after the Meat Wagon in an entertaining sequence.

Orwell turns out to be one of Traveler’s old special forces pals, and also one of the guys who was also dosed with NT 77 on that mission in El Hiagura. After crashing his rig and breaking the Rider’s hold, Orwell ends up riding along with Jan and Traveler to Drift. Here we have more action as Traveler asserts his authority over the rabble-rousing populace and dodges another Black Rider-sent assassin: The Tall Man, a nightvision goggle-wearing hitman who chases after Traveler in the darkness of the shantytown.

Of course Traveler and Jan become an item, but Shirley believe it or not doesn’t go into the details of the expected sex scene, which makes me suspect that Jan will return at some point, as she’s developed as basically the female version of Traveler and they’re an ideal match for one another. It seems to me that only casual flings are given the explicit treatment in pulp fiction, but more “serious” relationships are treated more prudishly. But then this makes sense, I guess. Anyway Jan now considers Traveler “her man,” and even saves his life a few times.

The Black Rider himself doesn’t do much this time out, and there’s no appearance from senile President Frayling. In fact The Stalkers sort of just barrels along, picking up and casting aside plots. It all culminates in Drift, where a Vallone flunky named Wentworth oversees the brutal control of army-corralled slaves; men and women who will be used for NT 77 testing. The Cheyenne tribe has already destroyed the NT 77 they came across, but obviously they’re keeping that from Wentworth – the plan is to get Martin out and then a pack of Cheyenne commandos will descend upon Drift and take out Wentworth and the Glory Boys (ie the leather-clad elite soldiers of the “US Army”).

Here we have a face-to-face confrontation between Traveler and Vallone, as the latter gets the drop on our hero as he comes into Wentworth’s headquarters in Drift. But Shirley doesn’t make much of it, just having Vallone throw Traveler in jail! Of course he and Orwell are able to free themselves, leading to a climatic shootout in which the Cheyennes come in with guns blazing and Jan nearly manages to kill Vallone, who escapes nonetheless. This finale isn’t as entertaining as the one in the previous volume, mostly because Traveler is relegated to freeing himself and then commandeering a heavy machine gun, which he uses to take out a few snipers.

As mentioned the Traveler/Jan relationship definitely seems to be building toward something, but Traveler just takes off in the end, in one of the most arbitrary endings I’ve ever read in a novel. It’s almost like Shirley was like, “Oh, right – this is a series!” Because otherwise Jan’s reunited with her brother, the NT 77 is destroyed, Jan and Traveler are together, Jan has proven to Traveler that he’s actually cured of the NT 77 effects and has only needed the antitoxin because he’d grown addicted to it, and even Orwell has hooked up with Junie, the “horse faced” daughter of Kettering (who we learn was killed in yet another ambush shortly after Traveler left his camp).

But instead of sticking around and being happy (one of the subplots of the novel in fact is Traveler’s fear that he’s starting to fall in love with Jan), Traveler gets up the next morning, tells everyone “so long,” and hits the road, ostensibly so he can gain vengeance on Vallone, but really so the series can continue on.
Posted by Joe Kenney at 6:30 AM