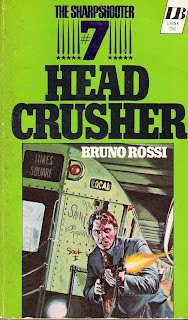 The only problem with Headcrusher is that it was the last volume of The Sharpshooter to be written by Len Levinson. Otherwise it’s the best installment of the series yet, melding Levinson’s strong writing and inventive characterization with the sadistic brutality of Blood Bath. Even though it was only #7 in the series, Headcrusher almost acts as a finale, with “hero” Johnny Rock finally settling the score with the mobsters who killed his family back in #1: The Killing Machine.

There’s an air of finality to the book, and not just when Rock visits a lawyer to have his will drawn up. I’ve yet to read my way through the series, so I wonder if the true last volume of the series, Mafia Death Watch, by Dan Reardon, has any sense of series-conclusion to it. Levinson states here that Rock has been fighting the Mafia for three years, and he’s getting worn out – that lawyer, an old family friend, even tells Rock he looks like he’s aged ten years in the past three. A fitting conclusion to Headcrusher of course would be for Rock to go out in a blaze of glory, but needless to say this doesn’t happen, though he does take a lot of damage here.

With this novel Levinson has perfected his version of Johnny Rock. In Levinson’s hands he is now a combination of the neurotic “Johnny” of Levinson’s earlier two novels in the series and the sadistic fiend of Russell Smith. The first big clue is that now Levinson refers to our hero solely as “Rock,” which of course sounds a lot more tough than the plain old “Johnny” of his previous offerings. Also Rock this time out could give lessons in being a bad-ass to Jim “Slaughter” Brown; there are several laugh-out-loud instances where Rock will put someone in place with a caustic remark, or just be mean for no reason, such as when he’s having sex with a hooker who tells him, “Ooooh, you do it so good.” Rock’s response: “Shut up.”

Anyway, Rock’s back in New York City, where he’s been hanging out in mob-frequented bars in the hopes of tracking down his family’s killers. He strikes gold when a pair of hitmen come in, conveniently blabbing about some of the jobs they’ve done in the past, one of them being the “Rocetti hit” a few years before. Ie, Rock’s family. Rock follows them and before wasting them finds out that they got the job to hit his family from someone named Mackie Malanga.

Malanga is another of those Levinson characters who springs from the pages of the book. A greaseball who runs the Venus Massage Parlor on Eigth Avenue, Malanga is thoroughly perverted and sick. Of course, the “massage girls” in the rundown place are hookers, but he makes his true money with the friggin’ kids he keeps locked away in the basement, where they are taken advantage of by creeps who pay Malanga fortunes for the opportunity. Malanga’s business model is sick but ingenious; he runs a racket so that the kids are picked up off the street by a “priest” who sends them to an “orphanage” – the orphanage being the basement of the Venus Massage Parlor.

Rock learns all of this shortly after arriving on the scene, screwing one of the hookers, and inadvertently saving Malanga’s life when a group of rival mobsters show up with guns blazing. Rock, who of course was just taking the opportunity to kill more Mafia, takes advantage of the fact that Malanga is instantly indebted to him, and soon enough Rock’s the guy’s right-hand man, giving orders to the other mobsters and schmoozing around with the motormouthed Malagna, ie the guy who killed Rock’s entire family.

Levinson works in some Godfather material here with a war going on between Malanga’s boss, Don Salvatore, and another don who wants a piece of Salvatore’s kingdom in Manhattan. Rock spends a long portion of Headcrusher acting as a mob enforcer, leading hitmen on raids against other families and gunning down traitors in cold blood. There’s even an involved part where Rock remembers he’s dubbed “The Sharpshooter” and scouts out the rival don from a rooftop, waiting to blow him away with a sniper shot.

Throughout Rock reminds himself that this is a great opportunity to keep killing mobsters; of course, he could care less about internecine strife in the Mafia. He also takes advantage of the fringe benefits of being Malanga’s right-hand man; Malanga tells Rock to feel free to sleep with as many of “the girls” as he’d like, and Rock does so. As expected, a friendship builds between the two, with Rock realizing he’s in the strange predicament of actually liking the man who killed everyone he ever loved. (In one sequence there's a humorous goof where Malanga refers to Rock as "Rock," and not by the name he's posing under, something Levinson must've missed in his edit.)

Not that this prevents Rock from being the hero we know and love. Anyone who has read Levinson’s previous two entries in the series knows that his presentation of Johnny Rock is full of surprises; Levinson will lull you into the character’s mindset and, just as you’re thinking Rock’s somewhat “heroic” (in that he only kills mobsters), Levinson will have him pull something thoroughly shocking, like in #4: The Worst Way To Die when he started sniper-shooting a group of people at a mob funeral, including young women who obviously had nothing to do with anything.

Rock pulls similar antics here, particularly near the climax when he gets a one-on-one meeting with Don Salvatore and his family. This actually leads into a well-done chase scene. Headcrusher is a little stronger in the action department than previous books in the series. There are several scenes of Rock blasting away at gun-wielding goons, either on his own or while leading Malanga’s men on raids. Rock’s main choice of weaponry is a Mauser, which he uses to blow off several faces.

It’s interesting to note that Levinson has Rock partake of drugs pretty frequently, which of course brings to mind Levinson’s The Last Buffoon. Rock smokes grass a few times with one of the massage parlor hookers, and later meets up with a group of hippies who also offer him a few joints. When one of the hippies sees that Rock looks tired (and he is, he’s been running from mobsters all night), she offers him a snort of coke. Rock likes it so much that he takes some with him, snorting it before his climatic battle! I wonder how that went over with (what I assume was) the largely blue-collar/conservative Republican readership of the series.

But again, this is a fun descent into lurid delights that one would expect from mid-‘70s Leisure Books, with the squalor of New York City brought fully to life. As mentioned, Mackie Malanga’s business affairs are thoroughly depraved (and Rock does prove himself a hero by freeing those enslaved kids), innocent people usually suffer most in the many violent skirmishes, and the sex is more nasty than erotic, usually Rock just “fucking one of the girls.” The only bright spots come courtesy of unexpected sources, like Don Salvatore’s attractive young niece, another of those strong female characters Levinson creates, one who has an instant rapport with Rock, making the reader expect one thing is about to happen when something entirely else does.

It’s a shame Levinson wasn’t kept on as the permanent writer for the series, as he does great things with Rock, turning out a twisted psychopath who still somehow manages to be likable. Or at least, enjoyable to read about. But as mentioned, Headcrusher has a note of finality to it, so it was only apt that this was Levinson’s last entry in the series.
Posted by Joe Kenney at 6:30 AM