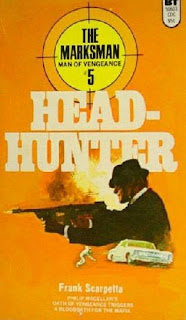 As mentioned in my review, Headhunter picks up immediately after the events in The Marksman #3: Kill Them All, which was also written by demented genius Russell Smith. (The fourth volume, Mafia Wipe-Out, meanwhile features Magellan back in the States, even though Kill Them All closes with him in St. Thomas...and Headhunter opens with him leaving St. Thomas.)

And by the way, you have to read Kill Them All for Headhunter to make any kind of sense; Smith refers back to that novel throughout the book, never once bothering to explain any of his references. It might be frustrating for someone who has never read that previous volume, but if you have read it, then it makes for probably the best example of continuity I've yet encountered in a men's adventure series.

After killing a ton of Mafia in idyllic St. Thomas, Magellan charters a private plane to fly him to Puerto Rico. Here we have an awesome instance of the pre-PC mindset when Magellan is thunderstruck to discover that the co-pilot of the plane is...a woman!! He's brought along his ever-present "artillery case" complete with drugs, disguises, and whatnot, as well as the heroin he's been lugging around for the past few volumes. Magellan arrives in Puerto Rico with a gameplan in mind: he's going to of course crack down on the local Mafia chieftan, Jacopo Morandi.

Things derail posthaste; hailing a cab, Magellan is attacked by the driver and his comrades, but of course manages to waste a few of them with his ever-ready Beretta. And again Magellan manages to take someone prisoner, in this case a kid whom Magellan drugs up, later tying the kid to a bed in his hotel room. Pretty strange stuff for sure.

But the plot changes again when Magellan discovers that he has become a wanted man, the story of his assault on the mob in St. Thomas breaking out in the local media. Sure enough the cops have figured out that Magellan is now in Puerto Rico, and not only are they most likely on their way to find him, but Magellan also discovers that the cops are busy cracking down on anyone Magellan reportedly dealt with in St. Thomas.

Magellan instantly realizes then that Terri White, his cute hippie-chick accomplice in Kill Them All, will now be in harm's way. But no worry, as she happens to already be on her own chartered flight to Puerto Rico, hoping to hide out with a fellow hippie who gives music lessons there. Magellan and Terri soon meet up again, and in a strange way it actually develops into a sweet little bond between the two (at least, as "sweet" as a blood-soaked Marksman novel can be), with Terri obviously falling in love with Magellan, and Magellan realizing that he too is developing feelings for the girl. In fact there are some very funny moments between the two, with Terri going along with Magellan's bloody plans, but constantly asking him to rethink, or at least to go somewhere else -- "Maybe some tropical island somewhere. I'm sure you can find some Mafia to kill there, too!"

From here it comes off almost like a retread of the previous book, with Magellan using Terri as bait, renting out a lavish villa and posing as a wealthy and single socialite, so as to attract the attentions of Morandi, a notorious skirt-chaser. In the meantime Magellan goes about wasting mobsters and/or taking them captive, drugging them and shackling them up in the wine cellar beneath the villa. Of course per tradition he manges to ensnare a few cops as well. This engenders bizarre but played-for-laughs scenes where Terri has to cook meals for the growing assortment of prisoners in the cellar, and Magellan taking them all out every once in a while for "latrine visits."

All sorts of lurid stuff ensues, as expected from this "gifted" author. Early in the tale, after moving into the villa and before he has started growing his collection of captives, Magellan leaves Terri with the still-captive kid, who manages to break free, rape Terri, and comes back with his fellow gangsters. By this time Magellan has arrived, and here of course is where he starts up his collection of drugged and shackled prisoners. Terri's rape though is brushed off, and the implication is that the kid didn't even know what he was doing -- Smith plays it vague on the kid's actual age, which makes it all the more strange when Magellan discovers later that the other prisoners, all of them adult mobster guys, are using the kid as jailbait in the wine cellar. At least Magellan has the dignity to take the kid away from them.

Anyway, there's all sorts of crazy and rough shenanigans throughout, but what more can you expect from the man who gave us Blood Bath? (Which by the way would actually serve as the first volume of this "trilogy," each of the volumes referring to one another.) The "action scenes" are again given over to Magellan blowing away various mobsters, though he does take a little damage here and there, moreso than in any other volume yet. Also, believe it or not, Smith works in some actual character development here, with Magellan several times questioning his motive, his choice to continue seeking his bloody fate, especially once he realizes he has developed feelings for Terri.

It's funny, because Magellan plans throughout to get rid of the girl, but she keeps sticking to him like glue. And even at the end Terri rushes off with him, the two planning to escape from Puerto Rico to Miami (once again Smith ends the tale with a rushed climax in which Magellan just casually blitzes the main villains)...and yet, it doesn't appear that Terri appears in another Marksman novel. I've only just flipped through a few future volumes, I haven't read them yet, but it doesn't appear that she shows up again. Time will tell. She makes for a fun character, though, adding a much-needed spirit to the books.

Finally, here's a scene I just had to quote, to give an idea of the twisted genius that is Russell Smith. Read on in slackjawed amazement as Magellan wastes a mobster who's visiting the restroom:

Magellan saw him walking toward him. He hugged the closet wall. He fingered the silencer on the Beretta and released the safety. Just as Micheli dropped his pants and reached for a comic book on the floor in front of the toilet, Magellan aimed and fired at his left temple.

Blood, brains and flesh splattered against the shower curtain as the body raised up and the sound of the man's noisy bowels evacuating drowned out the pressurized "whoosh" of the gun.

As the body of Micheli seemed to be trying to balance itself in death, wobbling to and fro ever so gently on the toilet seat, Magellan flushed the toilet at the same time he gripped the arm and holding it, allowed the heavy body to sink sideways onto the tiled floor now puddling with dark red blood.