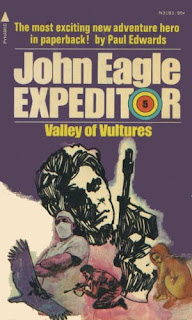 Author Manning Lee Stokes returns to the Expeditor series with what is by far the best volume yet. Stokes's previous volumes came off as a bit too padded, wheel-spinning until the trademark finale where hero John Eagle would don his fancy chameleon suit and, armed with his dart gun, would launch an assault on some enemy fortress.

Stokes here dispenses with the repetitive nature of the previous four volumes of the series and turns in an incredibly lurid tale about a former Nazi concentration camp doctor who now runs a place in Ecuador where he hacks off the testicles of "jungle Indians" and surgically transfers them onto the bodies of rich old men! And there's more lurid stuff besides...lesbian porno movies that are filmed while John Eagle watches, a nymphomaniac German lady who "services" Eagle moments after meeting him and thereafter wants him all of the time, flashbacks to bizarre concentration camp sex experiments, even an Israeli secret agent who hides a metal tube in a certain part of her anatomy, and needs Eagle's assistance to get it out!

The only thing missing from Valley of Vultures is the expected tropes of the series: John Eagle wears his chameleon suit for only a page or two toward the very end of the novel and then buries it, and he doesn't even fire his dart gun once. Plus he has none of the fancy gimmicry of previous volumes; no exploding shoes, explosive arrows, mini-bike, anything. Indeed Eagle goes on this mission completely unarmed, and so must survive solely with his hands, feet, and wits.

Eagle's boss is Merlin, wheelchair-bound codger who lives in a high-tech fortress built into a Hawaii island. Merlin has a "double" who poses as him, living under Merlin's real name in Scotland. The double receives a sales-pitch from a clinic on a remote island in Ecuador which promises to give the old man new balls, literally. Merlin expects it's a joke but strange reports are coming out of Ecuador, including the deaths of various Israeli agents. Merlin also suspects that it has something to do with oil, as Merlin -- via his double -- owns a large portion of Ecuadorian oil interests. In other words, he figures this company is playing on the lustful minds of rich old men, offering them a chance to be young again but in reality luring them down to Ecuador so they can get control of them.

Merlin also knows that many Nazis escaped to Ecuador after the war, and he suspects their involvement in the scheme. Stokes here reveals a bit of a left-wing slant, which is unusual given the genre. While mulling over the increasing fascism of the world (with even a veiled dig at Nixon), Merlin delivers the following comment, which is especially ironic when you consider US foreign policy over this past decade:

There is little we can do about it in the large scale -- we are hoist by our own petard of democracy and can hardly send in an expeditionary force to enforce democracy on those who do not want it.

Ha! Safe to say, Merlin wouldn't have gotten much consulting work from the Dubya Bush administration.

Merlin sends in John Eagle, who appears very early in the tale, again a departure from previous volumes, where he didn't show up until midway through. He heads to Ecuador, posing as the young assistant of Merlin's double. Eagle decides to play his role as a smart-ass cynic, and he doesn't fail to piss off the Germans who run the place. (But as stated, he also succeeds in turning on the nymphomaniac, and how.) The place is run by the creepy Doctor Six, an old lecher who we learn was once a concentration camp doctor. Six's testicle-replacement operation actually works, and Eagle meets a wealthy old former Senator who is the only patient currently at the clinic; the man's undergone the surgery and can't wait to try out the improved equipment, so to speak.

A third of Valley of Vultures plays out more like a lurid and trashy novel, with hardly any action, yet it's still pretty engrossing. Stokes is a fine writer, too, never once POV-jumping and doling out a host of ten-dollar words. He has a great ability to set a scene and delivers several taut sequences, in particular when Eagle learns that Merlin's double has actually died (of natural causes), and so now Eagle must escape the island.

What's strange is, the last quarter of the novel seems to come from a different manuscript. Returning to headquarters in Hawaii, Eagle delivers the intel he received from the Israeli agent; Merlin reads it and it appears that Hitler has a son, one who now lives in a small German-only village in the jungles of Ecuador. Eagle is sent back to Ecuador, his assignment to assisnate Hitler's son. Doctor Six disappears, despite being set up as the villain of the piece -- in fact we learn of his death only later in the book. Now the novel appropriates the adventure-writing feel of previous novels, with lots and lots of jungle description and Eagle living off the land.

What's even stranger is that Eagle drops into the jungle with all of his equipment, including his bullet-proof chameleon suit, but quickly disposes of it. For some reason I didn't quite get, Eagle instead treks through a few hundred miles of jungle while posing as one of the natives. Why he couldn't just keep his suit and gadgets is beyond me; I suspect though it had more to do with filling pages (as with previous novels, Valley of Vultures is around 230 pages, well over the men's adventure norm).

During his jungle trek Eagle of course runs into more native Indians, as well as a pretty female Indian who latches onto him. This character, Chikka, is actually pretty fun in that she speaks in a patois of jive-talking English. But all things considered, this last quarter of the novel just seems like more of the same stuff we read in previous Expeditor novels from Stokes. It's to his credit then that he ends the novel with a literal bang, Eagle finally arriving at the German village, watching it from afar with a sniper rifle, and only seeing Hitler's son in the final two pages of the book.

Thanks for the interesting column! Manning Lee Stokes also wrote a bunch of Nick Carter - Killmaster novels in the mid-to-late 60s and the parallels with the John Eagle series is notable. Carter, of course, is a parallel of Eagle - prodigiously endowed physically and mentally. Carter's boss, David Hawk, appears to be very similar to Mr. Merlin - an older, wiser, father-figure. More specifically, Valley of the Vultures features Dr Six - a character with the same name appeared in Nick Carter #10 (Istanbul) who was also a Nazi concentration camp doctor. I believe a scene where Carter extracts something hidden in a very personal place of a female acquaintance appears in Nick Carter #9 (The Eyes of the Tiger) also written by Stokes.

DrPig, thanks for the comment! Always happy to hear from a fellow Expeditor/Stokes fan. I recently picked up several volumes of Nick Carter: Killmaster, including a few by Stokes (Red Rays, The Golden Serpent, and The Black Death), though unfortunately not the two you mention. Very interesting about the parallels to the Expeditor series. Stokes also wrote the Aquanauts series for Lyle Kenyon Engel, and I've also picked up that series -- curious to see if it too is similar to the template of Stokes's Nick Carter and Expeditor work.

Speaking of the Expeditor, in a few weeks I'll be posting an interview with Robert Lory, who discusses his work on the series.