The Executioner #115: Circle of Steel 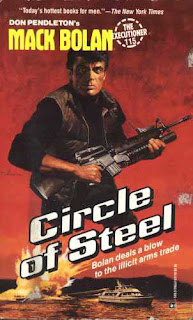 This is a crazy, wild Doc Savage sort of yarn that goes non-stop from beginning to end. Anything ever said previously about violence in the Executioner books must be put on hold. Circle of Steel drips with gore, gore with no particular point. Brains splatter, intestines spill out, eyes are shot or gouged out – you name it, it happens in the pages of this story. -- William H. Young, A Study of Action-Adventure Fiction

Yep, that made me want to read the book, too!

And truth be told, Circle of Steel lives up to its gory promise. Not only is this the best Dan Schmidt novel I've read, it's also the best of the Gold Eagle-published Executioner books. True, it's yet another Schmidt tale about a squad of American black ops going rogue and selling weapons to terrorists, even financing them in their terrorist activities, with Mack Bolan again caught in the middle of a convoluted plot filled with way too many characters, but there's a crazed element here that elevates the tale, something that was missing in the other Schmidt novels I've read.

The gruesome madness begins on the opening pages, as a band of scimitar-wielding Islamic terrorists hack and slash a senator and his houseful of guests. This scene is almost a tribute to the gory splendor of GH Frost's Army of Devils. These terrorists are part of a faction known as The Followers of the True Way; they are financed by a mercenary who goes by the impressive title Killer Keller. Keller also controls an army of mercs, whom he considers his real soldiers; he uses the Muslim fighters as "cannon fodder," exactly like the character Crammon did in the much later Schmidt offering Devil's Bargain. (One could easily argue that each Schmidt novel is the same as the one that came before, with only the names of the villains changed.)

Keller's complex scheme is to train these terrorists (on American soil, no less!) to kill a bunch of senators and whatnot, generally sowing chaos, while also selling them arms at inflated prices. He then plans to kill them so as to get back the arms and re-sell them. There's also a scheme involving a group of peacekeepers on a mission to the Middle East which Keller plans to kidnap and sell to the Followers; it was all a bit too convoluted to keep up with, really. More interesting are the arms Keller plans to sell -- the M-40 Maneater, an assault rifle designed by an associate of Keller's which fires regular bullets but is also outfitted with "x-wings" of grenades. Keller has a few crates of these; just one M-40 will turn a soldier into a destructive force.

Bolan comes into it after interrogating a former accomplice of Keller's who wants to come clean. As usual in a Schmidt tale, it's not so simple. The CIA's involved, neither Bolan nor his contact Brognola have heard of the Maneaters, and Bolan is forever one step behind Keller and his men. In a way Schmidt's novels are like action equivalents of film noir, with Bolan the hardboiled hero lost in a murky, convoluted, and dangerous world of cutthroats and killers.

And, just as in film noir, there's a femme fatale -- Ilsa Tausen, a blond German beauty who not only resembles a valkyrie but considers herself one. Ilsa once worked with Keller and was also his lover, but eight years ago Keller left her behind to rot in a South African cell. Ilsa eventually freed herself and is now consumed with vengeance upon Keller; her plan (one of many plans in this novel) is to infiltrate his team and kill him. Ilsa's father was an SS officer and she wishes the Nazis had won the war. She loves to use her body to lure men into their deaths...after having sex with them. She relishes murder and gets off on it, going into combat in a "skin-tight leather combat blacksuit," blowing people away with a smile on her face. Oh, and she also enjoys freebasing cocaine.

Yes my friends, Ilsa Tausen is the greatest character to ever appear in an Executioner novel.

It occured to me as I read it that Circle of Steel isn't only an amped-up variation of film noir, but also of screwball comedy. It operates on the same principles, with our straight-laced hero Bolan caught up in a madcap world of bizarre characters and goofy situations. For example: midway through the book Bolan realizes he's being followed. He springs a trap on the pursuers, who turn out to be a pair of guys in suits and ties. Immediately they tell Bolan they're CIA operatives, trying to capture Keller; further, they're part of a tactical team calling itself Talon. Then they ask Bolan if he'd like to help. All this, mind you, before they even ask Bolan who he is!

More dark comedy ensues as Bolan finds himself working with the Company. Of course they're all rubes and don't heed Bolan's advice and so get wasted in vast numbers during the many ensuing battles with Keller and his men. Bolan eventually goes all the way to Greece in pursuit of Keller; meanwhile Ilsa succeeds in her infiltration and allies herself with the man, plotting his death. But sadly this plot is lost in the shuffle of schemes and counter-schemes, with Schmidt once again sullying his tale with too, too many characters.

As in previous Schmidt books, there's a whole bunch of wheel-spinning here. I lost track of the number of times Bolan would grimly survey events and determine to see the mission through, or when Keller would basically do the same thing. I've realized that one can't fault Schmidt and others for this; one reason Pendleton's original novels are so much more streamlined is because they were simply shorter. In the mid-'80s Gold Eagle boosted the page count of their books, no doubt to make them look like "real novels," but the outcome was that now the authors had to fill more pages. Every Schmidt novel I've read would have benefitted from being shorter.

As William H. Young noted in his study of the series, Circle of Steel is quite gory, spectacularly so. Heads explode like watermelons, intestines sluice out, there's even a full-on gutting courtesy Ilsa. And given the presence of the M-40 Maneaters, there's also room for people blowing up real good -- and yes, Bolan manages to get hold of one of them, of course showing everyone how to properly use them. Schmidt even works some sex into the tale, with Ilsa sleeping with a few men she later kills.

Despite the wheel-spinning, despite the fact that the plot was recycled from previous (and future) Schmidt tales, I really enjoyed Circle of Steel. Ironically this was the last novel Schmidt wrote for Gold Eagle for several years, but at least it was a great way to go out.
Posted by Joe Kenney at 6:30 AM

This sounds amazing, and totally up my alley! I haven't read any of the Executioner books yet, hard to know where to start with so many damn books in the series, but this sounds like on that I'd like.

You can start anywhere, Cullen. I started with #158, Firing Line, having no knowledge of Mack Bolan before that, and found it easy enough to get into. :-]