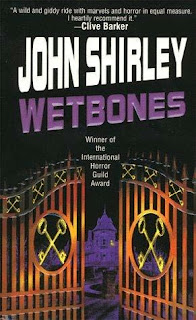 I think I can see now why John Shirley has apparently disowned his Specialist men's adventure series -- it gives little indication of the man's true writing talent. Wetbones was published about 9 years after that series and it suffers from none of the slow pace or inordinate padding. It's a straight-up horror novel, however, very much in a "Lovecraft for the '90s" sort of vein, so it might not be to everyone's taste. And also it's overly gory, something all of the critics were sure to mention, but I didn't find it too outrageous -- but then, having read David Alexander's magnum opus Phoenix, I'm pretty much desensitized to violence in fiction.

In many ways this novel is almost like a horror take on trash fiction. It's set in Hollywood, involves movie biz characters, and even refers back to past periods of Tinseltown excess with sequences that could have come out of Kenneth Anger's Hollywood Babylon -- in fact Shirley even mentions that book a few times. And in a way Wetbones is sort of grisly satire of Hollywood itself, of how people will do anything to become someone, and how those who are someone will do anything to take advantage of them.

Shirley juggles a fairly large cast, and he does so with such flair that you easily keep track of everyone. He also does not POV-hop a single time, which is always a cause to celebrate with the adding of chocolate to milk. Two "main" characters emerge: Tom Prentice, a struggling screenwriter looking for his big break, and Garner, a former drug addict who is now a reverend, counseling addicts and kids on the street. Prentice and Garner have their own plots throughout the novel, ones that gradually weave together until they meet at the very end. For though they don't know it, Garner and Prentice are united by the central threat here: the Akishra, nebulous, worm-like entitites from the astral realm that feed on the pleasure centers of the human brain.

Prentice has just identified the emaciated and mutilated body of his ex-wife, Amy. She plays heavily in his thoughts as he goes about the business of trying to get money for a script, all while hanging out and driking with his friend Jeff, a successful action screenwriter who I'm betting is based on Shane Black. Garner meanwhile has more immediate problems: his teenaged daughter Constance has gone missing. Garner knows she has been kidnapped and so goes on a quest for her, intuiting that she was most likely taken up to LA. We the readers know that Constance is going through much, much worse than the lurid, horrifying things Garner imagines she must be going through.

For Constance has been kidnapped by Ephram Pixie, surely one of the most despicable characters ever to grace a novel. Ephram has complete control of Constance's mind, using her as a puppet. He gets off on having her pick up strangers and then taking them back to their hotel while she has sex with him (or her), all the while Ephram watching, until finally Ephram forces -- through his mind -- Constance to murder the person. So this leads to all sorts of lurid stuff as Constance will be astride some guy, slicing him apart, hating herself for it but unable to control herself. And indeed getting of on it. Constance's story might be the most twisted one in Wetbones, as she realizes she must become like Ephram to survive.

Prentice and Jeff meanwhile go off searching for Jeff's missing younger brother, Mitch -- who happens to have been the last person Prentice's ex wife was seen with. And just as with Constance, Mitch's reality is far worse than anyone could imagine. He's trapped in the Doublekey Ranch outside Hollywood, the rolling mansion of a once-famous husband and wife. These people are even more twisted than Ephram; the house is an endless horror in which kidnapped victims go through endless misery for the satisfaction of the owners. Like Ephram these people control the mind; like Ephram they are "pleasure vampires," vassals of the Akishira, who, to retain their own pleasure centers (which we are told eventually burn out), put victims through endless torment to gain satisfaction via proxy. Any sort of satisfaction -- and since pleasure has finite potential but pain is limitless, they mostly put their victims through gruesome hell.

The Doublekey Ranch material is not for the squeamish. Shirley packs in the gory detail, particularly toward the end, where we have such Clive Barker-esque material as a bedsheet which has been made out of the skin of one of the victims, complete with the hollowed face gaping up from the center. All of it capped off with the girl who is being raped on the bed looking down and seeing that the face in the bedsheet is her brother's. I mean, it's all pretty outrageous and definitely leaves an impression on the reader.

Prentice and Garner go through their own personal hells through the novel, Garner in particular. In his trawl through the underbelly of LA he falls back into his addiction, and here Shirley fully brings to life the nihilistic world of the addict. Wetbones should be required reading in rehab clinics; after reading it you will never look at addiction the same way again. Long story short, the Akishra feed off of the sick, self-destructing pleasures of addiction, and after latching into an addict they push him or her on and on until they at last kill themselves.

It isn't all horror, though. Shirley works some humor in, and as mentioned there's a definite trash fiction vibe here, like when Prentice is seduced by a fast-talking Hollywood beauty named Lissa, who takes him upstairs during a party and proceeds to have her way with him. This scene isn't just for show, as Prentice is taken on a sort of astral trip during it, and realizes he and Lissa are being watched by someone in another room -- being watched remotely, that is. Again, the creepy connotations of the real meanings behind pleasure and fame and etc.

The novel is such an engrossing and well-crafted tale that I really don't want to say too much about it for fear of ruining it for others. Shirley proves himself a master of juggling his large cast and putting them together at just the right time. Even the finale is well done, something I've found is usually rare in horror fiction. In fact the finale could come right out of the Specialist, with an armed group of heroes infiltrating the Doublekey Ranch and blowing bastards away.

I'm not sure of the original printing, but this 1999 Leisure edition is fraught with grammatical errors. I mean, to an absurd degree. Also, it's apparently been taken from a British typescript, as British spellings prevail: "tire" is "tyre," "flavor" is "flavour," and so on. I see that Shirley published a revised edition in 2005, however it also appears that he rewrote the book to a certain degree. It might be worth tracking down one of these days.
Posted by Joe Kenney at 6:30 AM

Those is an old article but I just happened across it after finishing Wetbones. Great article. My copy is also filled with grammatical and spelling errors!