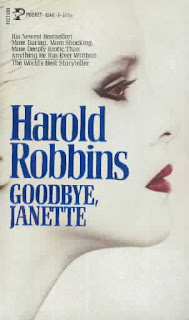 I read this Harold Robbins novel in the manner of my forefathers: I took it with me on vacation. I think I've discovered at least one secret behind Robbins's success, as his "no thinking required" style of writing is perfect for those who just want to unwind after a long day of laying on the beach or visiting the tourist traps. Dean Koontz had already figured this out, stating in his 1972 book Writing Popular Fiction that "Big Sexy Novels" like Robbins's shouldn't contain big words or in-depth plots, not because their readers aren't intelligent, but because they're looking for no-frills "beach reading" entertainment.

Goodbye, Janette was in fact Robbins's last bestseller. And it was a sad way for him to go, as the novel is truly the work of a bored, burned-out writer. It's just as bad as the earlier Dreams Die First, but whereas that novel at least had a bizzaro sort of charm, Goodbye, Janette instead limps along to its anticlimatic end. Actually, that's only partly true; another of the many frustrations about this novel is that it occasionally shows true flashes of vintage OTT Harold Robbins. The cover proclaims it "More Daring, More Shocking" than his previous books, and that's not mere hyperbole -- at least for the first quarter of the novel.

This time, to save himself from having to come up with a plotline for an entire novel (which as we saw in Dreams Die First resulted in utter chaos), Robbins instead splits the book into four sections. We start off in WWII-era Paris, our protagonist the lovely Tanya, a young Polish widow who escapes the concentration camps due to her command of various languages. Tanya is also able to keep her infant daughter Janette with her, working as a translator for a non-Nazi German businessman named Wolfgang who has been placed in charge of various companies in occupied Paris.

We're lulled into the narrative as Robbins jumps back and forth from immediate post-WWII Paris to a few years prior, as Tanya falls in love with the German businessman. Due to various reasons however she marries Maurice, an entitled Frenchman who marries Tanya merely so she can have French nationality and thereby retain ownership of the companies for Wolfgang; it wouldn't do for a German to retain ownership so soon after the war.

Then Robbins blows our minds with some of the most warped stuff he's ever written. Tanya has already gotten a glimpse of Maurice's oversized "phallus;" she prepares herself for her wedding night, wondering if she can "accomodate" him, if you catch my meaning. But good gravy. What follows is an OTT scene of depredation that would make De Sade envious, as Maurice breaks out his cat o'nine tails and proceeds to whip the living hell out of Tanya. It goes on and on, with sadistic sex added to the mix. As if that isn't enough, Maurice eventually moves on to young Janette, now a preteen, paying her visits over the years and stripping her down before he whips her -- and she enjoys it! Indeed she gets off on it, so unable to control herself that she orgasms every time Maurice takes hold of her.

Tanya of course hates Maurice and doesn't even live with him, not realizing his abuse of her daughter -- nor the fact that her daughter enjoys the abuse. Talk about a messed-up family. Tanya waits for over a decade for Wolfgang to return, only finding out too late that the man is dead, murdered immediately after the war. Janette turns sixteen and Maurice takes her out of her private school and puts her through his own 120 days of sodomy (it occurs to me that the first quarter of the novel is in fact Robbins's take on De Sade), and again Janette enjoys it. She comes out mauled and brainwashed, and so abused that she must undergo surgery. Tanya finds out, goes to Maurice to murder him, but accidentally murders his lover instead (Maurice is bisexual as well) and ends up getting killed for her efforts.

No surprise that the rest of the novel can't keep up the pace. Janette becomes the focus and unsurprisingly she grows into a callous woman. Before her death Tanya had another daughter, Lauren, her father an American businessman Tanya had a passing fling with. Janette, after using Lauren as bait to get what she wants, finally passes the girl off to Johan, Wolfgang's old partner and the only "good" presence in the novel. Johan takes Lauren off to raise her in America. Janette meanwhile undergoes plastic surgery to lose weight so that she may attain a classic model's body. As expected the novel's all over the damn place; somehow Janette decides she will become a cosmetics and fashion entrepreneur, first becoming a famous model and then launching her own line. Meanwhile she abuses men and women alike, occasionally finding time to visit Maurice, hating herself for it.

But then that's one of the novel's many problems. Maurice disappears from the novel and we're left wanting to see the bastard get his comeuppance. Robbins apparently forgets after another coke-snort and instead focuses on the uninvolving Janette. It goes without saying that characterization suffers here; Janette in particular changes every other page, sometimes a loving big sister, sometimes a wicked debutante, sometimes a no-nonsense businesswoman. And sadly it's all very boring.

Then there's Lauren, who meanwhile grows up into a beauty herself, but a California girl through and through, smoking homegrown dope with her hippie friend Harvey. She eventually returns to Paris, where she herself becomes an overnight celebrity after appearing in a fashion show Janette puts together. This sequence is one of the few in the book that matches the opening, not due to the OTT nature but because Robbins actually writes here; the show is inspired by Dante's Inferno and features a sequence of crimson-hued clothing, culminating in Lauren's appearance in a blood-red wedding gown.

At length Robbins remembers Maurice, but it's too little, too late. After a few hundred pages of petty squabbling and page-wasting business meetings, with hardly any of the insanity we expect of him, Robbins limps toward his conclusion, as Janette -- not Maurice -- gets her comeuppance. The title was a mystery to me, but it appears that Robbins lazily came up with it at the very end, as at least three or four characters tell Janette "Goodbye" before storming out of her miserable life. Finally she's beaten to a pulp by a jilted Greek lover (no doubt based on Onassis), but survives, determined to go on living.

Anyway, it was all pretty bad. I still say the best Robbins I've yet read is Descent From Xanadu -- written after he'd lost his bestseller status but a hell of a lot better than this.
Posted by Joe Kenney at 6:30 AM

You are a brave, brave man.

I read this as a teenager. It blew my mind back then, but now not so much