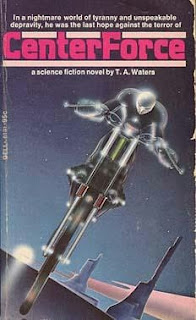 What a missed opportunity. This could've been THE psychedelic sci-fi novel of the entire countercultural movement of the early 1970s. Its "Easy Rider meets 1984" near future America of biker gangs, hippie communes, roving vigilantes, and overbearing governmental agencies encapsulates all of the countercultural staples -- there's even sex and drugs and rock. But the novel fails to deliver on its own promise, and instead becomes a pretentious trawl of a read. Pretension was also one of the staples of the counterculture fiction, as I learned to my dismay years ago when I read a batch of forgotten hippie fiction. CenterForce might be the most pretentious of the lot -- and I've read Stones of Summer!

In barely 200 pages the novel relays this "hippies against The Man" near future of what appears to be the early 1980s. It doesn't matter, though, because the novel's as "early '70s" as you can get. The hippie protests of yore have escalated so that now the government is killing its own; the CenterForce has been created to track down and eliminate home-soil hostiles. An entire stretch of desert in the Midwest has been blasted apart, but here the bikers and the hippies eke out their existence. Like Escape from New York, this barren wasteland is now theirs. But satellite technology tracks their every move as they travel to and from their little kingdoms; and, more dangerously, government-sanctioned vigilantes have clearance to shoot them on sight.

Ben Reed (think Waters was a Fantastic Four fan?) is one of the bikers, and we follow him as he heads on into the forbidden territory to meet up with his fellows. Along the way he evades CenterForce patrols with his augmented BMW chopper (which looks nothing like the Roger Dean-esque illustration on the cover!), takes some mescaline, and thinks about the various women he's slept with. Outside the biker-controlled town is the StarChilde commune, in which a virginal girl has come to seek spiritual knowledge; instead she meets Ben, which results in instant love.

But if only the novel was told in as simple a fashion. Instead, CenterForce is made up of elliptical chapters of two to three pages; many of the chapters aren't even narrative, but governmental dispatches, transcripts of hippie interrogations, diary entries, letters from one minor character to another, "translations" of Chinese poems (which turn out to have been written by a computer, ha ha ha), and, worse yet, sections of script complete with action, dialog, and camera directions. It's as if Waters tried every trick in the book to get around the fact that he had such little story to tell. He even gave each "chapter" titles lifted from the I Ching! Pretension so thick you could choke on it.

Anyway, it's a shame. This novel really could've been something.
Posted by Joe Kenney at 9:24 AM