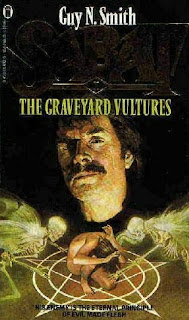 Sabat #1: The Graveyard Vultures, by Guy N. Smith
May, 1982 New English Library
Here begin the adventures of Dr. Strange -- er, Mark Sabat, that is -- an astral-voyaging magician/former SAS ass-kicker who now works as a professional exorcist, fighting the legions of hell wherever he may. Oh, and he's possessed by the demonic soul of his brother Quentin!
Sabat even looks like Dr. Strange on the cover, but otherwise he bears no (prosecutionary) resemblance to the Marvel character. For one, he's a hell of a lot meaner -- Sabat comes close to being the most unheroic "hero" I've yet encountered in a men's adventure novel.

The "possessed by his evil brother" is one thing, but beyond that Sabat has his own issues: he was kicked out of the SAS for engaging in s&m sex with a superior officer's wife; due to speeding he runs over and kills an innocent pedestrian and brushes it off as "fate;" he suffers from such an overactive libido that he walks around with an erection after merely meeting a woman (and indeed he "pleasures himself" a handful of times during the course of the novel. Handful -- aren't I clever?).
The "Graveyard Vultures" in question are a coven of English-countryside devil worshippers who are digging up corpses for their black magic rites. In the process they've exhumed the corpse of a recently-dead girl, the bones of a century-dead black magician, and in general have sown much satanic mayhem, offering sacrifices of virgins and prostitutes. Sabat's called in by the Church to get to the bottom of it...and he'll take the job for the money, thank you very much.
But I'm jumping ahead; the novel itself opens with Sabat engaging in final battle with his corrupt brother Quentin, a black magician so consumed by evil that his body has gone skeletal. Quentin raises some corpses and Sabat fights them, but his lack of faith undermines him and Quentin basically wins; Sabat is only able to despatch him with his trusty service revolver, a leftover from his SAS days. But as a result Quentin is not vanquished and is able to reincarnate himself -- this time within the mind of Sabat.
The novel itself picks up an interminable length after that opening act of fratricide. Sabat, suffering from Quentin's countless taunts in his brain, arrives in the English countryside and researches the activities of these left hand-pathers. He avoids the cops, who themselves are investigating the exhumations and murders, and instead speaks with the local parishoner, an old man given to sucking noisly on his pipe. Actually, there's a whole lot of sucking going on in The Graveyard Vultures -- but not the trashy kind. No, I'm talking straight-up pipestem-sucking, which Guy N. Smith mentions in great detail several times, going on about the "gooey sucking" and other disgusting details, all of which caused my "Freudian Sense" to tingle into overdrive.
After checking out the local riffraff, nearly dying in a hotel fire caused by the coven, and masturbating a few times (umm...yeah), Sabat performs an exorcism on the chapel's graveyard. A psychic battle follows in which he defends himself against the coven's zombie demons, "raping" the woman in charge of them -- who it appears is a zombie herself in the psychic realm, meaning that our boy Sabat can chalk "necrophilia" off of his to-do list. But it's all an illusion, and Sabat comes to weathered but victorious. And now he knows for sure that said woman is involved with the coven: Miranda, a redheaded prostitute whom Sabat has seen about the village.
So what does Sabat do? Why, he pays her a housecall! But Miranda is happy to see him, and indeed comes on to Sabat with such vigor that soon enough he's stripped down, and, per her request, masturbating for her viewing pleasure. Sabat just can't get enough of himself, it appears. But it turns out Miranda's played him; she tries to kill Sabat with a knife. He stops her the only way he knows how -- impaling her with his own special little knife, which I guess is standard SAS training. After a good bit of lovin' Miranda is deprogrammed and reveals to Sabat that she's been forced into the coven; she'll be happy to help him defeat the bastards.
What follows is more sacrifice, demonic summonings, walk-ons from various voodoo gods, and our hero suffering from innumerable hard-ons (in between running over pedestrians, that is). And all the while his brother Quentin is there in his mind, taunting and berating him, which sort of reminded me of that old Steve Martin/Lily Tomlin movie All Of Me.
I've been familiar with his work for years but this is the first actual novel I've read of prolific UK pulpster Guy N. Smith. His writing is good, if a bit too pristine at times. I get a feeling of detachment from the narrative -- but then, this is something I've often noticed in UK trash fiction. This sort of spatial dissonance, as if the author wants to get down in the trash while at the same time ensuring he doesn't get dirty. I mean, for all of its many problems, you can't say that lurid trash like The Sharpshooter is afraid to go all the way into sordidness.
Sabat returned for three more adventures, plus two short stories, all of which were compiled in the 1996 omnibus Dead Meat.
Posted by Joe Kenney at 9:07 AM

I like a lot of Smith´ work, but his Sabbat is great. Totally over the top, of course, but it delivers.

Thanks! Groovy Age of Horror is one of my favorite blogs, btw. I was able to get that "Dead Meat" omnibus, so eventually I'll get around to reading the other Sabat adventures...