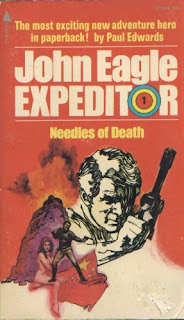 The 14-volume John Eagle Expeditor series answers the unasked question: What if Jack London had lived in the 1970s and wrote men’s adventure novels?

Born to a Scottish couple who moved to America and then who both died while he was still an infant, John Eagle was raised by the Apache. Now as a man in his late twenties he’s the sort of character who only exists in men's adventure novels: a perfect balance of both heritages, a capable man of action who knows all the tricks and trades of the American Indian, yet who also received an Oxford education.

For reasons this first installment, Needles of Death, fails to explain, Eagle answers an ad in the paper asking for men of adventure looking for dangerous but rewarding work. After three years of training (none of it described – like most men’s adventure novels Needles of Death skips over all of the backstory and instead focuses on the mission at hand), Eagle is now a full-on Expeditor, working for the shadowy Mr. Merlin and sent about the world to stop various threats against the United States. Mr. Merlin is a billionaire who lives in a sprawling estate overtop a dead volcano in Hawaii; he answers only to the US President and he has created the Expeditor program in order for the US to quickly take care of incidents with little notice. Eagle is the first (and so far only) Expeditor. In the entirety of Needles of Death the two men never meet; Mr. Merlin keeps his identity hidden from all save the President (whom Eagle does meet – checking the publication date this could only mean, then, that Eagle met with Richard Milhous Nixon! I wonder if they took a photo of the two shaking hands, like Elvis and Nixon?).

For his first mission Eagle's dropped into the barren desolation of the Gobi desert. The Red Chinese have taken over an ancient lamasery in Mongolia, where they appear to be developing a laser weapon which can blast airplanes from the sky. Eagle is armed with a clutch of devices, all of which reminded me of the accessories that would come with an old GI Joe or Big Jim doll: a skin-tight chameleon suit which is bullet and blade-proof; a mini-bike which can be assembled in seconds and runs on tires inflated with poisonous gas; a metallic longbow and steel arrows; a gas-powered gun which fires “needles of death;” shoes stuffed with an experimental plastique which can blow apart an entire city block. And that's just the tip of it: Eagle also has pills for food, pills for water, and a batch of other stuff which fits in the innumerable hidden pockets in his chameleon suit (which also features a motorcyle-type helmet with visor that allows him to fully meld into his surroundings).

Eagle meets with his contact, who of course turns out to be an attractive woman: a Mongolian named Mary Choja who kills with the stoic reserve of an Apache and who keeps right up beside Eagle in the freezing hell of the mountains, despite not having a heated bodysuit of her own. Eagle treats Mary roughly throughout; we never really get in the man's head, find out what makes him tick, but we quickly learn that he’s so dedicated to his mission that all else pales to it. So he pushes Mary along with force, getting angry with her if she wants to rest, or that she wants to free her brother (who it turns out is Eagle’s other contact, and who has been captured by Mongolian bandits). There's an aura of “male mystique” to Needles of Death, of the type found in 1970s men's magazines: Eagle feels himself superior, the strong white male who can retain the “savagery” of his “Indian nature” due to his western side; however Mary, a Mongolian, cannot. There are all sorts of ethnic snap-judgements throughout Needles of Death; whole sections of it would be considered unpublishable in today's tepid world.

Thanks to Justin Marriot’s Men of Violence magazine I’ve learned that Manning Lee Stokes served as “Paul Edwards” for this installment of the series as well as the next. Needles of Death in its way perfectly captures the nature of its protagonist and the series itself. Like Eagle the novel melds two natures: adventure fiction, with picturesque descriptions of mountain crags and rough terrain, and action fiction, with gunfights and commando raids in the dead of night. It’s not a particularly violent novel, with Eagle killing quick and efficiently, but there is a bit of sex.

However there’s no real sense of danger. Eagle is presented as such a marvel of manhood that there's never any question if he might survive this first mission. The novel also lacks a strong villain; actually there is no villain, Eagle instead fighting anonymous soldiers and bandits as he plots to destroy the laser station. But despite this it's still a good novel, with strong writing, good dialog, and wonderful depictions of the hellish Mongolian environment; in fact it reads like a “real” novel and not just a first volume in a series, and, like Peter McCurtin’s The Killing Machine and Andrew Sugar’s The Enforcer, it works just as well as a standalone novel.
Posted by Joe Kenney at 9:08 AM

Read these books as a boy is school (about 35 years ago...). Loved them! Now I'm looking for them again so I can re-read them for some just plain-old escapism!
I highly recommend them