Slaves Of The Empire #5: Corissa The Vestal Virgin 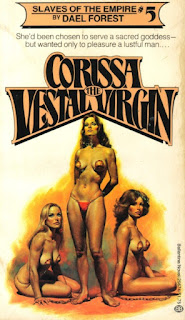 The Slaves Of The Empire lurches to a close with a fifth volume that’s just as befuddling as the previous four, Stephen “Dael Forest” Frances doing little to get his readers up to speed on the plot, the characters, or anything else. As I’ve said in I think every other review of this series, I get the impression that Slaves Of The Empire was written as one big book – one that, judging from this final volume, never even got a proper ending. Worse yet, Corissa The Vestal Virgin for the most part almost seems to be an installment of another toga trash series entirely, with the recurring characters of the previous four volumes reduced to supporting roles.

As we’ll recall, the main plot has it that a Roman noble named Hadrian (not to be confused with the future emperor) is building a city called Trebula outside of Rome while meanwhile he’s fallen in love with his slave, a Briton named Haesel. Haesel’s brothers and sisters have their own subplots, from dim-witted bombshell Mertice, who is caught in a lame love triangle, to Thane, who is a master craftsman. There’s also Redeard, who became a free man volumes ago and is now a successful businessman. The very least we get in the way of “resolution” in Corissa The Vestal Virgin is that some of these siblings are finally reunited: Haesel and Thane meet in Trebula, the first they’ve seen each other since they all were taken into slavery in the first volume. Surprisingly, Frances doesn’t much exploit the dramatic potential here, just leaving their emotional reunion to a scant few lines of off-hand text, but then again the series overall has been an emotionless, spiritless dirge that takes place in a vacantly-described historical setting.

As mentioned, it’s the new characters who really run the show this time, but even here the title is misleading: “Corissa,” the lovely young head Vestal Virgin (meaning she’s been in service to goddess Vesta the longest), only appears on a handful of pages. Instead the plot is about a scheming duo of senators who plan to pin the blame of a ruined crop in Romania (or somewhere, I forgot) on Vesta – particularly, that Rome has grown so dismissive of the once-important goddess of hearth and home that she has invoked her wrath by destroying these highly-necessary crops. Their proof point is the fact that the so-called “virgins” of Vestal are anything but, sleeping around with lovers and not taking their once-sacred duties in vain; whereas serving Vesta was at one time a spiritual calling, it is now seen by young noble women as a ladder to high stature.

Diocles and Litirum are these two senators (I might’ve jotted the latter’s name down incorrectly, but I’m too lazy to get the book out of the box to verify), and they take up a goodly portion of the narrative with their boring scheming. It’s a lot of back and forth with Maximus, the High Priest of Vesta (himself a wealthy nobleman who prefers the solitude of his library and looks on his “sacred duties” with boredom) and some dude who is the “Chief Augur.” You know those parts in old historical epics like Ben Hur or The Fall Of The Roman Empire where it’s a lot of British guys in period costume debating with one another in faux-“Shakespearian” accents? Well the entire Slaves Of the Empire series is pretty much just like that, this subplot in particular.

And still we focus on other Vestas instead of titular Corissa; one of them gets involved with a dude heavily into s&m, and he gradually talks her into some whipping. This last bit is probably the sleaziest the series has gotten, but even here it’s told with that disaffected, clinical tone so familiar of British pulp. I mean there’s no outright sex in the book, just a lot of talk about “love-play,” and the majority of the lurid stuff is told in summary. There seems to be a focus on whipping in this one, though; the novel opens with Maximus presiding over the sacred duty of sending off an “old” Vesta and replacing her with a new one. Here Frances skillfully sets up his theme of dwindling faith in the old ways: we’re told that once upon a time Vestas who shirked in their duty were seriously whipped before being cast out of the temple, but now it’s a formulaic procedure in which the whipping is faked for the audience, and the girl must pretend to scream and cry.

This though again brings me to the question of when all this takes place. At one point Frances reels off a list of the gods the Romans believe in, but they’re all the old ones, like Jupiter and such. In reality, by the time of the Empire, most Romans were into esoteric Eastern cults, like Isis or Mithra. This is actually how Christianity was able to spread; it was the new hip religion among rich Roman matrons, particularly around the era of Constatine, when a few of these same matrons “discovered” sites in Jerusalem which are still considered sacred today. But there’s no mention of any of that here, which again places the setting of the series in question. We do for once get a glimmer of period detail when Tiberius and Nero are briefly mentioned; there’s also mention of an upcoming aristocrat named Trajan, with the implication that he indeed is the future emperor of the same name.

We do get a resolution on the lame Alexander-Mertice-Melanos triangle that’s been going on since the first volume. As we’ll recall, Alexander is a foppish gadabout who prides himself on his “love-play;” he once owned Mertice, who fell in love with him, but he gave her away to Melanos, ie the noble tomboy babe Alexander lusts after. Last time it was set up that Alexander had some plan in mind for these two women. This time we see it, and it’s pretty despicable; through belabored means he kidnaps Mertice, placing her in a sort of silk prison for a few days. All as a “joke” on Melanos. He has one of his buddies visit Mertice every day, trying to get her in the sack; once she’s finally succumbed and is sufficiently worked up, Alexander comes in and drops the bomb that he’s behind her kidnapping. He tries to get her in the mood with his hands – Mertice being a virgin still – until Mertice not only reveals that someone’s already done this for her, but indeed that it was done better than Alexander’s doing it…and the person doing it was a slave! This we’re to understand hits Alexander right where it hurts: in his arrogant heart.

Otherwise we don’t even get to “main” characters Hadrian and Haesel until page 67. Their story seems to occur in the swingtown seventies, with Haesel again happily “lending” Hadrian to a rich older noblewoman whose money is important for the creation of Trebula. Meanwhile Hadrian gives Haesel her freedom, for once showing a spark of personality as he first treats her roughly, calling her “slave” and the like, before revealing that she is free, and also the new mistress of his house. But this sadly is where we leave them, so there’s no resolution to the overall storyline; we’re told that Haesel will still try to find Mertice and Redwing, implying that in future volumes this would finally come to pass.

Frances does spice the book up with lurid details likely gleaned from Daniel Mannix’s Those About To Die, in particular a long sequence, which suddenly detours into the style of a history book, which recounts the bloody entertainments of “the stadium,” aka the Flavian Amphitheater, aka the Colisseum. It’s all sick and wild, with lurid tidbits about Romans having sex in the stands while blood sprays in the stadium below, but it just seems to be lifted whole-hog from some other “nonfiction” book and placed in here. Even worse is it’s all relayed via summary, in a part in which Redbeard happens to do business near the stadium and briefly reflects on its horrible nature and background.

This sudden focus on violence and sleaze plays out in the finale, an unexpectedly brutal sequence which has the two scheming senators succeed in their plot; Vesta’s “virgins” are blamed for the crop failure, and are summarily rounded up…some of them, like Corissa, while in bed with their lovers! So much for the “virgin” tags. Corissa pays the ultimate price, whipped for real and then friggin’ buried alive outside the Hearth of Vesta, all so as to appease the goddess. From here we jump to an arbitrary, WTF-finale in which Poppaea, a very minor recurring character who is not to be confused with the former empress, picks up some dude on the street and decides he’ll be her new plaything in bed.

And that, my friends, is the unsteady note on which Slaves Of The Empire comes to a close, leading me to believe that Frances likely had more installments in mind and the series was just cancelled – and he wasn’t asked to write a concluding installment when the books were brought over to the US a few years after they’d been published in the UK. I have to say though I’m glad to be done with the books – the best thing about them is the awesome cover art by Boris Valejo on these US editions. If only the actual novels were up to that caliber!
Posted by Joe Kenney at 6:30 AM