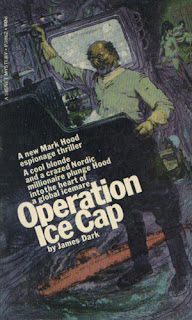 The tenth volume of Mark Hood almost seems like a more fleshed-out rewrite of the earlier installment Operation Octopus, but whereas the plot of that one was “Underwater Nazis,” the plot of this one is “Space Vikings!” And that really is the plot Operation Ice Cap is building toward, only for J.E. “James Dark” MacDonnell to scrap the sci-fi stuff at the end and go for a much more primitive finale, with hero Mark Hood being chased through the woods by a woman armed with bow and arrow.

There’s no pickup from any previous volume, and when we meet Hood he’s again on vacation, this time in the South of France where he’s busy conjugating with a Nordic gymnast named Elke. We’re often reminded of Elke’s “boylike” athletic stature, save for her large breastesses, and when we meet the new couple they’re tearing through the narrow roads in Hood’s sportscar. After some nondescriptive sex out in the cheap showiness of nature, the two are lounging around when a trio of Italian toughs come by, looking for some fun. This will be one of the few action scenes in the novel; Hood wipes out two of them with his karate skills, and Elke kills one of them, tossing a knife with a professionalism that jolts Hood. Even more curious is how she takes photographs of the two Hood knocked out, and insists they not bring the police into the affair.

Meanwhile, the main plot of the novel has to do with US Navy ships being melted in the North Pole; a megalomaniac named Norsgaard operates out of a high-tech facility beneath the ice, employing a legion of soldiers, all of them blond Nordic giants, and we watch as he uses his newfangled technology to heat the water around a couple ships to the point that they literally melt. As I’ve mentioned before, the series is now on the same wavelength of the James Bond movies of the day – heavy on the sci-fi plots, but lacking in the quips and humor Connery brought to Bond. Mark Hood for the most part is pretty much a cipher. He’s called into Intertrust headquarters in Geneva – here I belive is the first we learn his middle name is Kingsley – and briefed on the missing ships. He’s to go to Norway to figure out what the hell is going on.

I love how MacDonnell baldly ties together the two plot threads – Hood’s at a hotel in Trondheim, and in comes Elke of all people, surrounded by a group of athletic-looking young people. Hood’s cover as a globe-trotting gaddabout serves him well, and the two laugh at the “coincidence” of meeting again, and begin their affair anew. However, as we soon learn…Elke is the daughter of none other than Norsgaard, the megalomaniac ship-melter, aka “the wealthiest man in Norway.” Not that Hood knew this before coming to Norway; indeed, he has no idea who is behind the situation with the ships, and the opening with Elke in the South of France is incidental to everything. At any rate Elke invites Hood to dinner at her father’s place, which turns out to be a high-tech fortress on an island, serviced by beautiful young women in “futurisitic sheaths of some glistening material” that clings to their shapely bodies.

It’s very much in the Bond movie vibe here as one of these girls shows Hood around the fortress, which is complete with doors that slide open and other such “villain’s lair” amenities. Hood to his credit starts to suspect that any guy who can afford such luxuries – the sliding doors, for example, are built on a level beyond modern technology – might also be the sort of guy who could melt Navy vessels. As I say, MacDonnell just says to hell with careful plotting and belabored setup; he only has about 120 pages to work with, so he gives us the fast moving spy-fy yarn we’re here for.

This “dinner date” with Elke takes up a good bit of the narrative. Norsgaard – who I forgot to mention has a horrifically-scarred face, thanks to improprer forceps handling when he was born – holds forth on the usual supervillain topics as he wines and dines Hood, then trots out a bound and masked pair of guys as part of the afterdinner entertainment. They are of course the two Italian toughs who attempted to rape Elke, earlier in the book; Hood watches in amazement as Norsgaard melts one of them with his melt-ray gizmo thing, but for some reason takes exception when Norsgaard’s hulking blond henchman breaks the neck of the other. This leads to one of the few other action scenes in the novel, with Hood using his karate skills against the thug and his assortment of Viking weapons.

For as it’s clear now, Norsgaard fashions himself as a modern-day Viking (despite the horrific face he too is a towering wall of muscle), and eventually we’ll learn that his plan is to melt the Polar ice caps and destroy civilization, while he and his chosen “perfect” people wait safely in space and then repopulate the Earth with generations of Vikings. This is what he calls his “Viking dream.” He doesn’t immediately tell Hood all this, though; out hero of course has gone through all this – including the fight with the henchman – as a test, Norsgaard gauging if Hood is worthy of being in his Viking army, despite not being Nordic. Initially Norsgaard claims his plan is to melt the caps just a little, enough to raise the waters of docks around the globe, all as some sort of eco-terrosim ploy to get world governments to back off on their environment-harming practices.

Hood’s next test is even more of what we want from this genre; two of those perfect Viking gals come to his bed that night (Norsgaard having insisted Hood stay overnight in the fortress, of course), and offer themselves to him. After a moment of indecision – separately or both at once? – Hood decides on the latter, but as ever MacDonnell immediately ends the scene and we don’t even get a glimmer of naughtiness. Norsgaard next morning informs Hood that this was a test of his “virility,” as Hood will only be granted membership in Norsgaard’s organization if he gets the girls pregnant! And what’s more, Norsgaard has high-tech devices for this as well, so he’ll know in a handful of hours if Hood’s knocked the girls up. We learn that he indeed has, but interestingly this subplot isn’t much belabored other than it’s another right of passage Hood must endure to get into Norsgaard’s orbit, as he has by now of course figured out that this is in fact the villain of the piece. The dashed-off subplot about the pregnant girls is rendered a bit ghoulish, given the climax of the book.

Sadly though the sci-fi stuff is pretty much jettisoned at this point. Hood strikes up a friendship of sorts with Danielsson, Norsgaard’s personal pilot: Danielsson, we’ll learn, is an astronaut whose chief mission will be to return the colony of space Vikings to earth. He tells Hood the true plans of the supervillain, and since Daniellson himself is sickened by the plot he helps Hood take down Nosgaard’s operation. But it’s all so anticlimactic, friends. Rather than slam-bang action, the third half of the book is comprised of Hood and Danielsson’s scheming. There’s none of the action or thrills you’d get in a Bond movie, that’s for sure. In fact it’s downright messy in how it goes down, to the point that I wasn’t sure what was going on. Hood and Danielsson escape in a plane and Norsgaard’s in a rocket of some sort – not the one going into space, because they’d expect Danielsson to be in that one, so presumably the one that’s supposed to destroy the ice caps? – and the rocket blows up, and our main villain is killed, believe it or not, entirely off-page!

Instead the finale is on the primitive tip, with Hood being stalked in the darkened woods, Elke hunting him Diana-like with bow and arrow. MacDonnell skillfully elaborates the irony of the situation: what started out as such a high-tech sci-fi caper has now reached an altogether old-fashioned climax. This part is more tense than would normally be expected, as Hood has endured such a brutal beating from Elke’s personal henchman (himself scar-faced, a recurring conceit in the novel) that he’s woozy and dazed and can’t even see straight, let alone defend himself from a skilled archer. MacDonnell doesn’t shirk on the man-vs-woman battle, either; usually these pulp authors will have some other female come along and finish off the female villain, or some other development to protect the hero’s “honor” and keep him from killing a woman and all, but Hood dishes out his own death. If that weren’t enough woman-killing, we later learn that Intertrust has overseen the bombing of Norsgaard’s HQ, killing everyone in it – meaning the two girls Hood got pregnant have been killed as well. Not that Hood even considers this!

All in all Operation Ice Cap is a fast-moving yarn with MacDonnell’s typically-capable prose; like a veteran pulpster, he knows how to tell you just as much as you need to know to keep the story moving, without getting bogged down in extranneous details. That being said, this one is at least a little more fleshed out than Operation Octopus, which was almost like an outline at times. There’s a bit more detail and description this time, more fully bringing to life the situations and settings, regardless of how outrageous they are. But I would’ve liked to have at least seen more of Norsgaard’s Viking army, and the prospect of “Space Vikings” was so cool it’s unfortunate we never actually got to see them. Otherwise, this series continues to give you everything you could want from ‘60s spy pulp, and I really like it.
Posted by Joe Kenney at 6:30 AM

This sounds pretty badass. I have yet to read any Mark Hood, but I will keep an eye out. (Actually, I may already have some buried in my storage unit.)

I'm not sure how I would care for this particular story, but the next-to-last paragraph is really preaching to the choir in my case. My least favorite cliche in adventure stories is the way they go out of their way to PREVENT a male hero / female villain showdown, usually (as you say) by having the heroine arrive at the last second and fight her (or even kill her so SUDDENLY that you wonder what the point was). It's a kind of "Deus Ex Machina" moment, but it never seems to get picked on for BEING one.

The Sam Durrel novel Assignment Black Viking had Durrel fight a guy in full Viking regalia with an ax. It also had the old weather control machine plot. One of the pulpier Durrels.