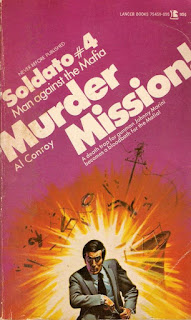 Gil Brewer turns in his second and final installment of Soldato, once again proving that, despite his talent as an author of hardboiled mystery yarns, he really couldn’t cut it as a men’s adventure writer. I can only assume he didn’t understand the genre – not that the genre is very complex or anything – and that he did his best to wing it over the course of 190-some pages. I mean folks the “climax” of this one features Johnny “Soldato” Morini hiding a room…for like 15 pages.

Actually Morini is a former soldato, aka Mafia soldier, and Brewer again does a swell job of reminding us of his past and how he’s still hooked on the girl he was married to back in the earliest volumes. Brewer does at least invest the series with a lot more emotional weight than the genre average, but really is that what any of us are here for? Morini in Brewer’s hands is too pensive, too given to self-doubt and uncertainty; he’s comparable to Len Levinson’s interpretation of Johnny Rock in the first two Sharpshooter novels he wrote, The Worst Way To Die and Night Of The Assassins. Then editor Peter McCurtin gave Len the advice that his version of Rock wouldn’t last, that Rock must be more driven, more prone to violent action – that he must “kill with cold hate,” a phrase that spurred Len into turning in one of the better installments of the series, Headcrusher.

I guess there was no editor on Soldato to give Brewer any such advice. Thus we must endure Morini’s frequent anxieties, and while we’re often told of his burning hatred for the Mafia, very rarely does he do anything about it. In fact he goes out of his way not to kill at times. More unintentionally humorous though is his supposed helper slash “best friend,” Riley, the lawyer who set Morini up in his current capacity of one-man army for a cancer-ridden old Mafia don who wants to wipe out his former brothers. Riley does absolutely nothing to help Johnny (as Brewer refers to his protagonist, so I’ll start doing the same) for the majority of the tale, and most of the time tells Johnny not to call him! There’s a ridiculous amount of antagonism between the two, particularly in how Riley expects Johnny to do everything on his own and acts like it’s a huge pain in the ass to even answer his occasional phone calls.

There’s no pickup from Brewer’s previous volume, and when we meet Johnny he’s in New Orleans, already having established himself as “Bacchi” for local Don Marno. The gist of the series is that Johnny goes undercover in various Mafia families, busting them up from within; his operating parameters seem to be “kill everyone,” as Riley and his Justice Department cronies aren’t really looking for arrest warrants or anything. Johnny’s got a lot of problems this time, and one of them’s that the real Bacchi, a Chicago soldato, is in prison; Johnny’s pretending to be the guy, the story going that he busted out of prison and is now looking for a job with Don Marno. Of course, before novel’s end the real Bacchi’s Don will come down to New Orleans to hook up with Don Marno, adding a bunch more tension to the tale.

And as if that weren’t enough, the photo taken of Johnny in the previous volume has been destroyed, but L.A.-based Don Sesto got a drawing made of it, a drawing by a professional artist, and he’s flying around the country to show the various families this drawing. I mean he can’t mail it or anything. I mean the dude’s literally walking around with a single drawing, the thing covered in protective glass and everything, and showing it to other Dons across the country. The whole subplot is so ludicrous you have no choice but to just go along with it. Johnny manages to fix this guy, though, in one of the novel’s more tense scenes: Don Sesto just happens to fly into New Orleans after midnight, and Johnny chases him along a deserted highway before crashing him into a lake and getting in a brutal life or death struggle with him. A curious capoff here is that, when Riley belatedly arrives on the scene, he insists on taking the drawing instead of destroying it, like Johnny wants to. Given Riley’s general half-assery throughout, I almost wondered if Brewer was developing a subplot that Riley would eventually sell Johnny out, hence his keeping this drawing that could cost Johnny his life.

We get a quick reminder that this isn’t your typical men’s adventure series; the opening sequence introduces us to Don Marno and his orbit of followers, including his heroin-addicted brother Milo. There’s also a six year-old kid the Don treats as his own; the boy’s mom is Helena, Marno’s disowned daughter. There’s a subplot about Marno having killed Helena’s husband because he wasn’t worthy, and also Helena is hooked on heroin and etc. To Brewer’s credit, none of this goes where you’d expect: while Helena is introduced in a scene where she screams at her dad to be able to see her son again, she wants to be accepted back into the family and still has Mafia in her blood. Also, despite being the prettiest woman Johnny’s ever seen, our hero doesn’t get lucky – Johnny’s really a sad case when compared to his men’s adventure brethren, friends – other than a quick kiss. Indeed, Helena will go further than any other character to do away with Johnny…not that he does anything to get her out of his own way, even once he’s figured out what a threat she poses to him.

But this opening bit with Don Marno lets us know what we’re in for: a lot of talking, a lot of scheming and plotting. Don Marno is up against two rival local Dons: “Fats” Faturo and Logari. As with previous volumes, Johnny will try to engineer a war between the families…at least, that’s how it starts out. Instead the onus of the plot becomes more about Johnny trying to protect his identity, with more time placed on his fretting – and eating in restaurants and diners – than on action. The back cover even promises that in this one Riley will be taken captive, which hints at some action or at least tension; instead, the subplot’s over and done with in about twenty or so pages. A couple of Fats’s men get the jump on Riley, Johnny as “Bacchi” hears about it, and that night – after a big meal – Johnny puts on black clothes and springs Riley from the warehouse where they’re holding him. Riley doesn’t even thank him!

Speaking of meals, the novel is very much of a different era. Johnny’s constantly smoking or pouring himself a drink; before any action he’ll hit a very heavy meal, like a couple steaks and etc – plus “five different vitamins.” In fact Johnny seems to drink quite a bit in the course of Murder Mission, to the point that I wondered if it wasn’t some in-jokery courtesy Brewer…that it was more of an indication of how much Brewer himself was drinking as he ground out the manuscript. It’s clear though that he struggles with the basic tenents of this genre; the action scenes, for example, are almost dashed off, with more focus on the talking, the scheming, and the introspection. And Johnny is much too consumed with guilt for a men’s adventure hero; we’re even informed he sometimes sees the faces of the men he’s killed in his sleep – even the men he killed in self-defense.

For that matter, Brewer fails to grasp basic action-telling principles. I mean no one could ever confuse Johnny Morini with Mack Bolan. For one, Johnny’s only ever armed with a Colt Cobra .38. Not that there’s a problem with this, I mean .38 revolvers were pretty much the standard firearm for ‘70s crime fiction. But the problem is the way it all goes down. For example, there’s a part where Johnny abducts Helena and ties her up in an abandoned building, to be collected by Riley (who of course bitches that Johnny has troubled him with this task). But Helena manages to get herself loose, call Milo (Marno’s junkie brother), and has him come over with some soldiers. So Johnny’s standing there in the room, sees three guys walking down a hallway toward him…and he runs away! This leads to a tense chase, at least, but still – dude, you’ve got a gun, and they’re all just walking toward you, conveniently bunched together. It would be like shooting fish in a barrel, but our hero instead desperately rushes for the window.

Even worse is the supposed finale. As “Bacchi” Johnny manages to talk Marno into hosting the rival two Dons – as well as the real Bacchi’s Don, from Chicago – on his yacht. Johnny gets some explosives from Riley (cue more bitching – seriously) and secretly sets them up…then for some belabored reason, he boards the yacht and must be present until right before the explosives go off, I guess to ensure everything works or something. But since he’ll quickly be outed as an imposter when the Chicago Don sees him, Johnny pretends to be sick and sequesters himself in a stateroom. This goes on for pages and pages. The ship moves further into the ocean, heading for the Gulf of Mexico, and hours later Johnny’s finally confronted by drunk goombahs who demand to see “Bacchi.” He manages to jump off the yacht as they start shooting at him; at least Riley proves his worth here in the finale, arriving on the scene in a helicopter to pick him up just before the ship blows.

I brought up The Executioner and again, as I mentioned in my review of the previous volume, I finally got confirmation that Gil Brewer was the mysterious author who was hired by Pinnacle to write the followup to Sicilian Slaughter (which was by William Crawford). I’ve read before that Don Pendleton often mocked an unpublished Executioner manuscript, one that had been sent in by some contract writer, and I’ve often wondered if it was Brewer’s manuscript Pendleton was mocking. While the writing itself is fine – the introspective stuff does add depth to the storyline, even though it’s unnecessary depth – the basic stuff you want from this genre is lacking. I mean imagine Mack Bolan hiding in the stateroom of a yacht for twenty-some pages in the climax of a Don Pendleton novel.
Posted by Joe Kenney at 6:30 AM

Based on that review, I don't need to read the book. But I am curious about who the cover artist was. Does anyone know?

Thanks for the comment, Bob! I wonder if the art was by Hector Garrido, who around this time was also doing the covers for The Baroness and The Destroyer. In fact Soldato here looks almost identical to how Remo is depicted on the cover of the early volumes of The Destroyer.

Ah, Hector Garrido sounds right. I forgot about him. Much appreciated!