The Progress Of An Affair 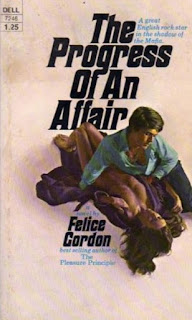 The Progress Of An Affair, by Felice Gordon
June, 1973  Dell Books

First published in hardcover in the UK in 1972 and then as a paperback a a year later in the US (with awesome but uncredited cover art), The Progress Of An Affair is ostensibly a rock novel but in reality turns out to be a piece of proto-chic lit. Narrated by a jet-setting but somewhat innocent young British woman, it has the ring of later such novels like Brigit Jones’s Diary (or whatever it was called), or even a British take on Sex And The City. Only without the “sex” part.

Our narrator is Lenore Edwards, a twenty-something British gal who, when we meet her, has just relocated to New York City to act as Director of PR for TRAC (aka Trans-Atlantic Recording Artists Corp, which is really “TRARAC,” but whatever), a sort of vanity label in that it only records a small roster of talent. Lenore informs us that she herself performs “Frank Zappa and Led Zeppelin,” but from her vague descriptions it appears that TRAC goes for a younger audience; she tells us that if you’re over 21 you might not appreciate hearing any of their artists on the underground radio stations. We’re told that the top new TRAC talent this year (specified as 1972 throughout) is COME, all caps and everything, but no detail is given on their sound.

The top overall TRAC talent is Jon James, a superstar – actually, a “constellation,” so far as run-of-the-mill rock superstars go. He’s young, he’s British, he’s beautiful with curly hair and all the mod fashions, but sadly Gordon is incapable or unwilling to tell us what he sounds like. This is another of those “rock novels” where the author doesn’t actually want to tell us about the music at hand; we’re just told Jon James is the best and the most famous, but we don’t get a lick of info about what kind of music he plays, what sound he goes for. There’s a part early on where he works on lyrics for his new album, but Lenore is in PR and thus doesn’t have much to do with the actual recording of the music. And yet, as she casually informs us, she listens to several hours of music a day as part of her job, even called in to make spot appraisals in the recording studios…not that we get to see any of this.

Instead, the meat of the tale is either focused on Lenore’s culture shock as a new US transplant or her growing relationship with…you guessed it, Jon James. But the culture shock is the predominant part initially; Lenore’s just gotten a nice apartment on Park Avenue, excited to move in with her jet-setting American girlfriend June, who has a galaxy of admirers but has settled recently on a ruggedly handsome type named Steve Mariano. We get a lot of stuff telling us about life in America, which probably went over better with the original UK audience; particularly humorous is Lenore’s off-hand announcement that she’s “gotten very good at making Bloody Maries.” This goof is in the narrative, not through dialog, so the editors at Dell clearly weren’t checking the original British manuscript very carefully.

If only there was more about TRAC and its roster of artists. I got a little personal interest out of the fact that the TRAC office is in the JC Penney building, in Manhattan; several years ago I worked at the JC Penney HQ, which had since moved to Plano, Texas (and is still there, about 5 miles from my house). Even then there were many employees who had moved down to Texas when the corp office relocated from Manhattan. But sadly even here Gordon doesn’t much elaborate on the building, or the TRAC office and indeed, doesn’t even stick around New York for the majority of the tale. This is because she ends up going on Jon James’s latest tour, her role to accompany the star and keep him happy.

Jon arrives in the US early in the book, here for the album and the tour, and we learn his wife is in the process of divorcing him. Jon, despite being under 30, is depressed and thinking of ending his music career – better to burn out than to fade away – and Lenore’s tasked with keeping his spirits up. They meet at the airport and Jon likes Lenore’s easygoing nature. I should mention that Lenore doesn’t often tell us much about herself, letting her personality and dialog do all the talking for her. At any rate Jon likes her and it’s decided she’ll go on his US tour because her presence comforts him. Another thing I forgot to mention – Lenore is a virgin, something Jon is surprised to discover when their inevitable (and titular) “affair” finally begins in earnest. But this book takes the cake for denying the reader any sleazy thrills:

The old idea of a virgin suffering the first time is not true for me. Obviously I’m a freak.

I hope you like commercial breaks since I have no intention of reporting explicity on my very explicit sexual experience. Let me put it this way.

And that folks is all she wrote. I mean why even bother with the cattiness? Authors like this puzzle me. It’s like they want to write dirty books without actually getting dirty. It’s like decaf coffee, it just makes no sense. But this is Gordon’s m.o. throughout, consistently denying us the cheap thrills we want from a book set in the hedonistic world of rock. Lenore becomes Jon’s mistress, but there’s no sleaze to speak of; slightly more risque is her later conjugation with none other than Steve Mariano, aka June’s latest boyfriend. This happens in a car and is more detailed in the fact that it actually happens, something which shocks Lenore. Mostly to illustrate that Mariano is a smooth operator, setting up future plot developments.

The stuff on Jon’s tour isn’t much elaborated on, either, just some vague mentions of how the various audiences respond to his music, which itself of course is not described. We also learn that Jon’s opening act is a TRAC group named Orgasm 4, “ a weak imitation of the Who.” Yes friends, yet another rock novel that’s condescending toward just about every rock group in it – for the ultimate in such snobbery, check out The Rock Nations. Actually more focus is placed on Lenore catching sight of some bootleggers in action, recording one of the shows. She rushes to tell Wyman, the tour manager, but he seems altogether casual about the situation. Gradually we’ll learn that Mariano is behind it – a syndicate bigwig, he’s looking to add Jon James to his portfolio. This takes us into what proves to be the final third of the novel.

Sequestered in Mariano’s Vegas domain, Lenore and Jon become virtual prisoners, and soon enough Lenore learns that June’s been hooked on heroin by Mariano. Oh I forgot to mention, there’s none of the expected drugs stuff here, either; we’re informed Jon doesn’t smoke grass and only tried LSD once, years before, and hated the experience. So we don’t get sex, drugs, or rock and roll! Instead the finale seems to come from another novel, with June spiralling into fullblown addiction and Mariano getting his hooks into Jon…before June shows up one day to settle the score in a most unexpected fashion. By novel’s end Lenore has returned to London with Jon, presumably to be at his side after he finalizes his divorce.

At a staggering 288 pages, The Progress Of An Affair is too sluggish, occurring in too small of a world. I mean Jon James is supposed to be a mega star, but the novel occurs mostly in hotel rooms with just the same handful of characters appearing. Gordon’s narrative style is good, though, with Lenore’s narration casually relaying thes story to you, and she’s a likable character in that regard, but I found the novel boring, and it’s really more of a romance with only the slightest of “rock” trappings.
Posted by Joe Kenney at 6:30 AM