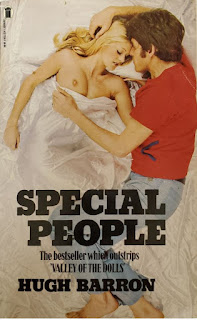 Okay, now that we’ve all taken a moment to appreciate that cover photo… Seriously though, this British paperback original has long been a mystery to me. As every schoolkid knows, “Hugh Barron” was a pseudonym used by Burt Hirschfeld early in his career; he seems to have dropped it upon the success of his 1970 blockbuster Fire Island, which was published under his own name. But then there’s this 1978 “Hugh Barron” book, only published in England; we know it’s by Hirschfeld, as it was reprinted in hardcover in 1988 – again only in the UK – under Hirschfeld’s name.

I picked this one up many years ago, before the blog, shortly after I learned of Hirschfeld’s work – probably around 2009, after I discovered Cindy On Fire at a used bookstore. I’m glad I did, as it appears Special People has become pretty scarce. I’ve often wondered what the story was behind it, but put off reading it because, per the back cover copy, it was about a football player, and I’m just not into football – and also, the back cover only refers to “football,” not specifying for British readers that it’s American football, not soccer. And there was also that 1978 date that put me off; I prefer my trash fiction from the late ‘60s to mid ‘70s. But now that I’ve actually read the book, I can confirm two things: it’s not much about football at all, and it was clearly written in the late ‘60s, probably 1969.

The ostensible protagonist, Cotton Tate, is indeed a famous running back for fictional football team the Truckers (apparently based out of New York), but there’s only one “football scene” late in the novel, and the narrative is more concerned with the large cast of characters that congregates around Cotton’s nightclub in the fashionable East Side of Manhattan. There’s a bunch of them, too, meaning that Cotton himself is lost in the shuffle; his subplot has it that he’s in debt to a mobster type, and is being requested to fumble plays and the like so as to affect the point spread. He borrowed the money to get his club, The Nubiles, and he’s desperate to maintain his lifestyle – secretly 37, which we’re told is ancient for a pro footballer, Cotton has a wife and kids back home but lives on his own, picking up women left and right. As described he seems to a Joe Namath type, only with “orange” hair.

Cotton’s a bastard for sure, a real love ‘em and leave ‘em type who walks over lesser mortals. The only part where we get to see any humanity is a brief bit where he visits home and we see that his young son looks up to him – and that his wife is quite happy with Cotton out prowling around, as she prefers sleeping alone! But regardless of whether he’s a hero or antihero, Cotton Tate doesn’t show up much, hence the subplot of him being in danger with the football commission and such doesn’t resonate with the reader. The sprawl of supporting characters is just too large, and the reader is left wanting a center, something to hold it all together. Only Cotton’s club, The Nubiles, performs in this capacity, with the titular “special people” being the screwed-up regulars who frequent the place, which is on First Avenue in the Sixties.

There are a lot of them, but Hirschfeld does his usual admirable job of juggling the large cast of characters; in this way the novel comes off like a prototype of Fire Island. First we have Deke Mann, a former PR guy in his 30s who now works as a writer for a TV talk show. While he starts off as a minor character – and an increasingly annoying one at that – Deke turns out to be pretty much the protagonist of the tale, as the narrative focuses on his sort of redemption through love. But for the majority of the tale his plot revolves around his increasing plunge into despair; divorced, with a young son he only sees once a week, Deke gets drunk a lot and starts fights he knows he can’t win, apparently looking to be beaten up. Eventually he starts stalking one of the female characters in the book – a pursuit that eventually pans out for him, #metoo be damned!

Kate is that female character, a hotstuff young babe with a heart of gold who lives with a small-chested wildchild named Libby. Kate initially falls in love with Cotton; she’s just one of his many one-night stands, but to her it seems to be something else, and she pursues him, only to be crushed. From here she ends up dating Cotton’s lawyer(!?), another doomed romance. Meanwhile Deke meets Kate in the Nubiles, falls for her, and starts making a nuissance of himself; there’s a bizarre sequence where he sees Kate looking at an expensive dress in a store window, and he goes in and buys it for her, even though he’s only ever said hello to her. She of course turns down the “nice gesture,” thereby setting off an also-bizarre subplot where Deke keeps carrying around the damn dress and trying to give it to her. Only when Kate realizes that this slouchy dude with the “angry eyes” and a propensity for stalking is really a sweetheart does she accept the gift.

Speaking of Libby, she’s another character who starts off as minor but gradually gets a little more focus. Her storyline seems to be a precursor of Cindy On Fire, in that she starts off as a partygirl bimbo but descends into drug-induced madness; there’s even a part where she literally runs from an orgy, same as Cindy would in her novel a few years later. She’s the daughter of some famous actress or something, just a total jet-setting nympho without a care in the world; one of the many subplots has it that the Nubiles bartender lets his mobster pals know when certain girls are at the club, and the mobsters send over guys to loot their apartments while they’re gone. When this happens to Libby and Kate’s apartment, Libby laughs it off. Her heart is broken by that same bartender, though, which leads her into a spiral of sex and drugs and swinging and whatnot, with her subplot mirroring Deke’s in that she finally finds redemption through love and understanding and all that jazz.

The novel seems to occur in a bland continnuum, Hirscheld for once failing to bring his world to life. There are hardly any topical references to the era, other than some of the outlandishly mod outfits Cotton Tate wears. This brings me to the matter of dating the manuscript. An early reference to Jimi Hendrix means Special People couldn’t have been written earlier than 1967, as that’s when Jimi came into the spotlight. There are also a few references to The Beatles which help pinpoint the date: we’re told someone says a lyric from “the new Beatles song,” and later someone mentions “All You Need Is Love,” implying that this might’ve been the earlier-referenced song. But late in the novel Libby, in a drug frenzy, hallucinates that the Blue Meanies are chasing her(!!!), and this would have to date the novel to late 1968, when The Yellow Submarine was released in the US. Another factor that makes me think the novel was written in early 1969 is a minor character states there are “no black quarterbacks” in football, a statement which was no longer true by 1969.

The Jimi mention occurs in one of my favorite parts of the book, if for no other reason than it’s a sad premonition of the average mentality of some of today’s “special people.” Deke ends up hooking up with some lady in her 30s at the Nubiles; she’s a proto social justice warrior, ranting and raving that America is a racist society founded on a lie. She also proudly announces that she’s had sex with several black men, just to prove that she herself isn’t a racist. (Little does she realize that this too will one day be considered racist.) She takes Deke back to her place, where Deke is shocked to discover the woman has left her seven year-old daughter alone (Hirschfeld masterfully calls out the hypocrisies of his characters with just a few subtle asides). She plays Jimi on the stereo – I guess because he’s black and all, but it’s not like Jimi really ever made “being black” a major part of his identity – and eventually she and Deke have some off-page sex (the majority of the sex is off-page, with the few on-page instances relayed in Hirscheld’s usual metaphorical prose of “cresting waves” and the like).

Unfortunately, there’s not much meat to the tale – it’s just a bunch of screwed-up characters congregating at a vaguely-descibed Manhattan nightclub. There are other characters besides the ones I’ve mentioned, like an older lady who looks young who sleeps around with a host of Nubles personages, all so as to gather “research” for the trashy novel her husband wants to write! This part could be its own novel, as the lady eventually is fashioned into a Jackie Susann type who will be positioned as the true author of the trashy tome. But nothing much comes of this subplot, like so many of the other subplots, save for a memorable bit where the lady is raped by a pair of over-eager football players…a situation the lady soon begins to enjoy!

As mentioned the football stuff isn’t that integral to the plot, other than Cotton’s woes with the commission – woes which are quickly dispensed thanks to a call to his lawyer. But it’s hard to give much of a shit about the guy because he’s presented as such an arrogant demigod of perfection, which is probably the same as what could be said about any real-life football star. He learns though that he’s gotten over his head with the mobsters who loaned him the money to buy the Nubiles, thus he will still have to affect the point spreads and etc to skew the betting numbers, but there’s no resolution to the storyline as the novel just sort of ends, so far as Cotton’s story goes: we see him playing a big game, giving his best, then we jump over to Deke and Kate, who have decided to leave New York and head off into a happily after ever.

The most interesting thing about Special People remains the question on why it was only published in the UK, even again under Hirschfeld’s own name. Perhaps Pyramid, the main publisher of his “Hugh Barron” work, just rejected it, as it must be said the novel isn’t very good. I mean it’s not bad, it’s just that it simmers for a couple hundred pages and never even reaches a low boil. And you don’t care about any of the characters. But then there’s the possibility Hirschfeld himself wasn’t happy with it, and maybe it’s what he was writing when Fire Island hit the bestseller list and thus he decided to postpone his “Hugh Barron” material. But then that again raises the question of why the novel was still published in the UK.

I guess we’ll never know. Otherwise though Special People isn’t up to the caliber of the other “Hugh Barron” books, all of which had great period details and more-gripping plots. However this one certainly had the best cover of them all! Now let’s get back to appreciating it…
Posted by Joe Kenney at 6:30 AM