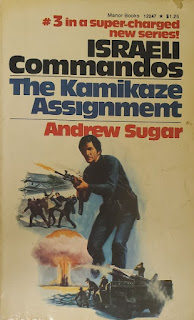 I really enjoyed this third volume of Israeli Commandos. Andrew Sugar follows sort of the same vibe he used in The Enforcer, focusing more on suspense and tension than outright action, but it’s all done very well. The characterization is a notch above the genre average, and there’s also a little bit of development for the overall series storyline – shame, then, that there was only one more volume to follow. Plus, there’s a part where our titular commandos are attacked by ninjas!

Our protagonist this time is Dov Abrams, who starred in the first volume; Sugar seems to have developed the template of Abrams featuring in one volume and Gershon Yelinga, another Israeli Commando, featuring in the next – Yelinga was in the previous volume and mentioned in the first one, but we don’t hear a thing about him this time. I assume though he’ll return for the final volume. Otherwise Abrams is the central character, and he’s much more likable this time, less hot-headed. The plot also takes advantage of Abrams’s status as a famous heavyweight boxer – as we’ll recall, he’s known as “The Israeli Muhamid Ali,” which is just wrong on so many levels.

While Abrams is the central character, as with The Enforcer there are recurring characters who add to the storyline. For one there’s The Major, Abrams’s taciturn spy boss. There’s also Abrams’s boxing trainer and his entourage of sparring partners and the like. Most importantly there’s also Ronit, Abrams’s famous model girlfriend, Abrams being one of the few ‘70s men’s adventure protagonists with a steady girlfriend. Ronit gets to take part in this installment’s mission; there’s a humorous part later in the book where she informs a surprised Abrams that she’s suspected for a long time that he’s a secret commando for Israel, as it wouldn’t take a genius to figure out why he’s always calling for matches in unusual locations – locations which turn out to experience heavy terrorist-blasting action soon thereafter. Abrams wonders if this means that Ronit too will eventually be drafted into the commando network, but unless Abrams figures into the next novel we’ll never find out.

Abrams and Ronit are on vacation in the South of France and enjoying some fine dining when a pair of local racists come over and start badgering Abrams for being a famous Jewish boxer. This leads to a nice fistfight in the street, with even Ronit getting in on the act. This will serve as our only action sequence until much later in the novel, though. In fact this one might have the least action yet in the series, but as stated this doesn’t take away from the enjoyment factor. While I found the previous two volumes a little patience-trying, The Kamikaze Assignment moves at a fast pace and keeps you turning the pages. And as the title suggests, this one takes place in Japan; per The Major, a Japanese explosives expert with radical leanings has offered the PLO some newfangled guidance systems for mini-atomic warheads or some other such Maguffin, and Abrams’s mission is to head on over to Tokyo and get one of the prototypes before they can be shipped to Iran…and be used posthaste on Israel.

Abrams’ only cover for going to Tokyo is to challenge an upstart Japanese boxer, one who is well below him on the boxing totem pole…sort of like Apollo Creed challenging Rocky Balboa in the first Rocky. It is of course a highly unusual move, and further casts doubt on Abrams’ entire cover identity; both Ronit and his coach reveal later in the book that the only possible way Abrams could even want to challenge this guy was if it was because he needed to go to Japan on some sort of “secret” commando mission. As I say, the novel at least ends with Abrams’ entire team being aware of his secret operative status, which promises further series developments – something Sugar was known for in The Enforcer.

But one thing Sugar doesn’t bring to this series is the sleazy and lurid vibe of The Enforcer, which was almost fixated on breasts and nipples and the like, with hardcore sex scenes in the earliest volumes. Israeli Commandos is comparatively tame. Abrams’s few sex scenes with Ronit all occur off-page, and she’s barely exploited at all. I mean what the hell? This could potentially have something to do with the fact that Andrew Sugar supposedly became a woman sometime in the mid to late ‘70s; way back when I reviewed The Enforcer #1, a few people left varying comments that Sugar was really a woman, or that he was a man with a wife and kids, etc. Around 2012 I was briefly in touch with a guy who had met “Andrea” Sugar and who told me he’d been called as a witness in a trial Sugar had put together against Clint Eastwood, claiming that the Dirty Harry flick The Enforcer infringed upon Sugar’s series of the same title! This was in the late ‘70s and of course the trial was thrown out.

But anyway, this person told me that Andrew Sugar had become “Andrea Sugar” shortly before the trial, and made for a “handsome woman.” He didn’t know anything else about Sugar and was only called as a witness on the artistic aspect of the case, as he himself was a writer. What I found most curious is that nothing else was ever published by Sugar after the trial; the last thing credited to him is the 1979 Manor paperback The Cult Breaker (which curiously features a Clint Eastwood lookalike on the painted cover!), and so far as I can tell there’s never been anything by an “Andrea Sugar.” Prior to “the change,” Sugar had been fairly prolific (and always published under his own name), so I wondered why he would’ve stopped writing even if his gender had changed. I was going to do a post about this on the blog at the time, but just never got around to it, so these two paragraphs will have to suffice.

So off our heroes go to Japan, where Sugar doesn’t beat us over the head with the cultural differences or arbitrary travelogue stuff. The flight over begins the suspense and tension vibe that will continue for most of the novel, as Abrams is summoned to the cabin of the 747 and informed a bomb’s been discovered onboard. Abrams has been called because it’s known by the public at large that he grew up dismantling bombs and stuff, just part of the daily life of being a kid in postwar Israel. He defuses the bomb in a nicely-done scene, only for one of his entourage to die regardless, thanks to some cyanide in a mixed drink. Later at the airport there’s a bomb in a briefcase; at this point Abrams knows one of his people is a traitor, and of course it turns out to be some minor character we’ve never met before.

It’s more on the suspense tip as Abrams and entourage are hooked up with a training facility outside Tokyo, but his concern is how to get off the premises without their police security detail not seeing them. Abrams’s lack of training for the upcoming match – ie, the very reason the world thinks he’s even here in Japan – becomes humorous (intentionally so), and serves up another reason for his coach in particular to suspect that Abrams is here for another reason entirely. And here come the ninjas – one night Abrams and his group are roaming the camp grounds when Japanese men in black suits bearing swords come out of the shadows and attack them, leading to a taut action scene where Abrams and his boxer pals defend themselves with their fists. It’s not until later that Abrams is told they are ninjas, which he’s never heard of. The various attacks make Abrams suspect there are two different factions trying to kill him, and he turns out to be correct, but the main threat centers around the Eijiro Electronics headquarters, owned by the radical who plans to sell his missile tech stuff to the PLO.

There are interesting scenes throughout, like a late-night soft probe Abrams makes on Eijiro, where he discovers the grounds are guarded by giant mastifs in addition to high-tech sensing devices. Sugar brings something else to the series that he did The Enforcer: a theme, something you don’t often find in the men’s adventure world. The theme is “Israelis are born survivors,” and Sugar successfully displays it throughout, from Abrams’s childhood familiarity with defusing bombs to the various members of his entourage willing to put their lives on the line for Israel. It’s especially displayed in the taut (but brief) climax, in which a battered, beaten, and bloody Abrams gets in the ring with the Mike Tyson-esque Japanese boxer, about the only thing fueling Abrams his fiery will to survive.

The action doesn’t really pick up until Abrams and team make an attack on a terrorist hideout, a very well-done scene which has them setting up some oldschool tricks like wiring up a door so that it electrocutes whoever touches it. The biggest action scene is on the night of Abrams’s big match; he rightly suspects it’s the only day the police guard won’t expect him to try to sneak off the training compound – given all the attacks on his life, Abrams has been placed under 24-7 police guard. They hit the Eijiro facility, wiping out hordes of terrorist scum, with Abrams delivering brutal justice with a .357 bast to Eijiro’s face.

This is where most novels would end, but Abrams still has a heavyweight boxing match to attend! Even though his right arm has been so injured he can’t use it and he’s got shrapnel wounds on his ass. In a half-daze he’s driven to the arena, where he demands that his coach give him some painkiller shots and stitch up his ass wound, insisting that he can still fight. I thought Sugar would have the fight called off, but it really happens – and not to blow any spoilers, but it is very much in the Mike Tyson mode, as Abrams has that Israeli fire in him and basically destroys the dude, using just his left hook, in a couple seconds.

So if this is the last we’ll see of Dov Abrams, it’s at least a bad-ass way to go out. As mentioned there’s a lot of opportunity as Abrams’s entire entourage is now aware of his being an Israeli Commando, with the potential that they’ll now be able to help him out on his future assignments. But it seems that Sugar developed a revolving protagonist setup for the series, so I suspect this will indeed serve as our farewell to this particular Israeli Commando. Overall though, The Kamikaze Assignment was a lot of fun.
Posted by Joe Kenney at 6:30 AM