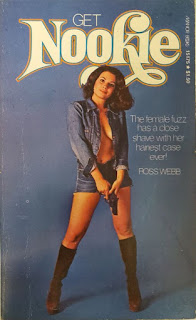 Get Nookie, by Ross Webb
No month stated, 1975  Manor Books

First we met Nookie, now we get Nookie, and it’s about damn time if you ask me. J.C. Conaway again serves as “Ross Webb,” credited as “Jim Conaway” in the Catalog Of Copyright Entries; the dude went by a ton of names. But if you’ve read one Conaway you’ve read them all, with Get Nookie coming off like a retread of the first volume, even down to the “Cast of Characters” we’re provided at the start of the book, with goofy clues as to which of them might be this volume’s villain.

It’s a little over a month after the previous book, with the action opening in late November and then jumping forward to Christmas, before wrapping up in the first few weeks of January. Nookie Narducci, our brunette bombshell American Indian/Italian beauty, is as ever strapped for cash, and hasn’t had a case since the last book. First though a moment to appreciate the cover photo; the nameless model perfectly captures how Nookie’s described, both sexy and innocent, though again the gun’s a fake as Nookie doesn’t even own one. Also the “hairy” puns of the cover copy ring false, because we’re reminded – within the first couple pages! – that Nookie, due to her American Indian heritage, lacks any body hair. And again surprisingly this doesn’t surprise any of the guys who boff her, given that this is the shaggy ‘70s and all…but then, Nookie only boffs the same two guys as she did last time, so they’re already aware.

I really enjoyed this one; it’s very much a goofy, light-hearted yarn instead of a violent thriller, but it’s not a straight-up spoof or satire. The humor comes more through the strange situations and Nookie’s disparaging comments about her love life or her lack of work. As I’ve written many times before, there is a lot of similarity between the writing styles – and plots – of Conaway and Len Levinson. Let’s add Martin Meyers, as not only is his writing style similar, but the plot of Get Nookie is a lot like the plot of Meyers’s fourth Hardy novel, Hung Up To Die: a killer is operating in a string of New York health spas, and our heroine goes undercover as a gym member to stop him. I guess at this point I’m familiar with Conaway’s style and wasn’t expecting too much of him, but again, don’t go into this one looking for thrills or action. Even the “tense” parts toward the end, with Nookie being chased by the killer, lack much bite, given the general light-hearted air of the entire book.

As if proving his “let’s take it easy” approach posthaste, Conaway sort of eases into the story; we open with Nookie still waiting for a job and checking out the newborn kittens over at the apartment of her GBF Sidney. The focus is more on Nookie’s lack of funds and her desperation for work, with only marginal efforts toward establishing tension or a plot; we do learn early on that Nookie works out in her apartment every morning with Johnny De Mann’s TV program. De Mann will eventually factor into the story, as he owns the “Swing Spas” which have recently opened in New York: gyms specifically catered to singles. You can even buy alcohol on the premises, which just struck me as strange. Nookie would love to become a member, as she’s worried she is putting on weight, but of course doesn’t have the money. One such Spa has just opened at the nearby Chelsea Hotel, which is where the previous novel took place and where the climax of this one will occur; little touches like this give the series a nice sense of continuity.

Meanwhile, people are getting killed at the Spas. We get our first reminder of the sleazy vibe of the series when a swinging ad copywriter meets some babe on the gym floor and then immediately has enthusiastic (and explicitly described) sex with her in the steam room. But when she leaves for a shower, someone comes in, obscured by the steam, and stabs the poor guy in the heart. As the novel progresses there will be more murders at the other Spas around the city, most notably in one instance in which a poor woman has a thirty-five pound weight plate dropped on her head while she’s lying on the floor doing leg extensions. Lt. Ferguson, the hunky cop from the previous book, is working the case, but suggests that Johnny De Mann hire Nookie as a private investigator to figure out who is behind these murders. His reasoning being that Nookie, as an attractive young woman, would have a better chance of operating undercover in one of the Spas.

It takes a while to get to the central plot, though. Nookie smokes “dynamite grass” with Sidney and pines over her boyfriend, Pompie, hunky Italian owner of a nearby bar, as they’ve had a minor spat. We also learn eventually that she also had something going with Lt. Ferguson but it’s broken off because he’s so hung up on his ex-wife. It goes without saying that she re-acquaints herself with both men as the novel unfolds, and like last time Conaway gets fairly explicit in the sex scenes. As I’ve mentioned before, Conaway never learned to type (as revealed in an eBay auction I saw years ago – the seller apparently knew Conaway and had come into possession of all of Conaway’s author copies after his death), so he hired typists to take dictation. I always get a chuckle imagining him shouting out the hardcore sex descriptions to some poor old spinster of a typist.

After the first Swing Spa kill we flash forward a couple weeks and Nookie’s got a security job at a department store, posing as a shopper to spot shoplifters. She hates the job and lets most shoplifters get away, feeling bad for them, something which soon gets her fired. Meanwhile the only “mystery” she’s encountered is who broke into her apartment and stole her black-and-white TV. Later, in an arbitrary subplot, the drunk old hag who lives next door and works at a laundromat will help Nookie figure out who it was: Head, the drug-addled hippie who sits in a daze in front of the apartment building all day. This subplot ultimately goes nowhere, but seems to exist so as to introduce Head into Conaway’s ever-expanding Cast of Characters for the series. Speaking of which, Mavis, the “raucous black woman” from the previous book, still hangs around with Nookie, as ever making unsettling proclamations about her sex life, or lack thereof; most unforgettable being her comment that the sight of a well-hung patron at the Chelsea Swing Spa makes her “old pussy quiver.” Good grief!

We even get a veritable “Nookie Christmas” with our heroine throwing a party at her place – she’s so strapped for cash she even steals caviar at the grocery store! – complete with gift exchanges among her circle of friends. Pompie gets her a new color TV to replace the stolen one, leading to another sex scene. Finally, the day after Xmas, Conaway gets to the promised plot: Johnny De Mann comes over to Nookie’s office (in which she spends most of the day reading Playgirl magazine and Travis McGee novels) and hires her to figure out who is behind the string of murders at his Swing Spas. This entails Nookie going from one gym to another, meeting an assortment of red-herring freaks. Even here though it’s played on more of a goofy vibe, with the oddballs coming off more like bizarre shut-ins than dangerous murderers.

Eventually Nookie works the case alongside Lt. Ferguson, which is how things progressed last time. And of course they get friendly again, but Ferguson’s hangup about his ex-wife is pretty humorous, and intentionally so. And like last time Ferguson comes to the rescue in the end, though Nookie for once holds her own. She’s planted “mace guns” around the various spas, and when she uncovers the killer – actually killers, in the plural – she’s able to defend herself as they chase her through the deserted Swing Spa. She also manages to rescue Mavis, who is about to be drowned for overhearing the murderers as they plotted their next kill, but just like last time Nookie herself still needs to be. This time Ferguson tells Nookie he’ll “never let her go again,” so it seems apparent he’d be in the next Nookie, which never happened.

As ever Conaway attempts a goofy sort of literary vibe throughout, especially when it comes to metaphors and analogies. Some of them are pretty damn memorable, like a spa secretary’s frizzy blonde hair reminding one guy of “what Cloris Leachman’s arm pits look like.” Nookie’s little corner of Manhattan comes to vibrant, noisy life, and Conaway subtly captures the everyday craziness of the time, like how Nookie’s apartment building is mostly frequented by bikers and heroin addicts, yet she traipses around without ever once feeling in any danger. I also like the oddball little touches here and there, like the off-hand comment that the walls of Nookie’s bedroom are covered with “crunched aluminum foil” so as to cover the old pipes and such – an idea from her window decorator pal Sidney. Also this book might contain the earliest reference to HBO I’ve encountered in fiction; Sidney tells Nookie that if he ever strikes it rich he plans to get “the home box office” on TV, and goes on to inform her that on it you can watch new movies without commercial interruptions.

This was it for the series, but not for Nookie: she became a blonde and changed her name to Jana Blake, continuing her adventures for two more volumes over at Belmont Tower. Her cast of characters went along with her, also changing their names in the process: Sidney became “Charlie,” Pompie became “Gianni,” and Lt. Ferguson became “Lt. Lanahan.” It’s been too long since I read the Jana Blake books so I can’t remember if Mavis made the transition. Even Jana’s office was located in the same place as Nookie’s. Also as I argued in my review of Meet Nookie, it seems very likely that the cover of Deadlier Than The Male was originally commissioned for a Nookie installment. The depicted heroine is a brunette and wears a trench coat, the same thing Nookie wore throughout Meet Nookie (she doesn’t wear one in this volume, though). Of the two series, I enjoyed Nookie more, if only because it’s more sleazy.
Posted by Joe Kenney at 6:30 AM