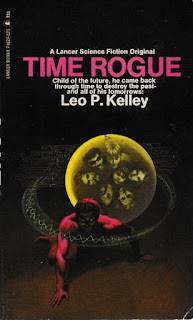 Leo P. Kelley will always rank highly with me, if for no other reason than his novel Mythmaster, which I still think of often – pretty much the epitome of psychedelic pulp sci-fi. I was hoping for the same with this earlier novel, and while the psychedelic touch is there Kelley goes for more of a dramatic tale. In many ways Time Rogue is a prefigure of The Terminator, with heroes in the “present” (ie a 1980s very much like the late 1960s) finding out they unintentionally create a “cyborgian” future two hundred years in the future. Actually it’s more akin to Terminator 3 in that a female cyborg is sent back in time to stop them.

Indeed, it’s the “cyborgian society of Century Twenty-Two,” which Kelley introduces us to in a fast-moving first chapter which left me confused as hell. But that’s how sci-fi pulp rolls, friends; there’s no need for fancy-pants world building. Only gradually does one grasp that “Max Marie,” the hermaphrodite cyborg thing which initially is presented as your typical villainous robot run amok, is actually on the side of good…or at least what he/she believes is good in this skewed future. Max Marie has just driven insane one of the few mostly-human individuals left on this future earth, a guy named Caleb who is a professor of “temporal history.” As we watch in puzzlement Max Marie pulls out the essence of Caleb’s crazed mind, splits it into seven sections, sends these sections back to “Century Twenty,” and allows the “husk” of Caleb’s now-mindless body to die.

We will learn that Caleb has partnered with these cyborgs to prevent his future from occurring; it’s your typical nightmarish future of ‘60s sci-fi, a la The Mind Brothers, in which humans have become so roboticized and cybernetic that they’re no longer really human. Kelley is presicent in this, given how our own nightmarish present is quickly headed into a sort of post-human future, with gender now deemed “fluid” and the ACLU tweeting stuff like, “Men who get pregnant are still men.” Given this, it probably is only a matter of time before “humans” become biomechanical hermaphroditic creatures that have lost all touch with what they once were, and thus some people will no doubt yearn for the days of the past, as is the setup here.

Kelley doesn’t spend much time in this future world, other than a handful of cutaways to it, where we see the cyborg administrators of justice torturing Max Marie for info and then trying to figure out where in the past he’s sent Caleb’s splintered mind. We readers know it’s to the twentieth century, and while Kelley doesn’t pinpoint the date it seems to be 1983 or so, given the time stated since World War II. The novel plays out over the span of just a few days, and the main character for the majority of the narrative is Ruth Epstein, constantly referred to as “old and gray” in the opening chapters and on the back cover copy. Today she wouldn’t be considered old at all, given that she’s only somewhere in her sixties. Forty years before, in 1943, she was prisoner in a concentration camp, along with her younger sister; both were in their twenties at the time, and Ruth is still haunted by what happened there.

There’s some unexpected character depth for a pulp sci-fi thriller, but then the same could be said of Mythmaster. What happened to Ruth’s sister in the camp is kept a mystery, but it’s something that has plagued Ruth throughout her life, something she’s blamed herself for to such an extent that she’s become a veritable old maid, living alone near her research facility in New Jersey. And her research is, you guessed it, centered around “uniting man and machine.” We meet her as she’s just successfully hooked a lab mouse into a computer. Of course the mouse dies but it’s a huge success. Thus in her own way Ruth will make possible the cyborgian world of the future, and must, per the hyperbolic back cover copy, die. Caleb enters Ruth’s mind in a memorable moment, quickly taking control and prompting her to follow strange requests – like driving to New York and attending a chess match.

This introduces the second of the seven characters who will mind-meld with Caleb: a twelve year-old chess prodigy named Barry Lamont who lives in a plush apartment with his wealthy parents. Barry proves to be a memorable character, somewhat wise beyond his years yet still retaining a childlike innocence about this possession of his mind by a man who hasn’t even been born yet – he just accepts this strange new reality for what it is. Unfortunately Barry is gradually minimized due to the other five characters who come into the fold. He makes a memorable first impression, taken over by Caleb on his way to a chess match, which he still manages to win. Then he meets Ruth, who has of course come to New York for him, Caleb pushing them to find one another so he can recreate himself here in this century. They also already know each other’s names, even though they’ve never met.

The next person is Sa-Hid, a Malcolm X type we meet as he’s giving a black power rant in Harlem (“Black is where it’s at!”). He of course brushes off Ruth and Barry when they approach him, but he too is unable to fight against Caleb’s mind control. Soon the three of them are heading back to Ruth’s home in New Jersey, Barry having gotten gruding permission from his parents, the story being that Ruth is a psychologist looking to study child prodigies. Sa-Hid contantly butts heads with them, which leads to Ruth nicely calling out Sa-Hid’s own racism and how he is “a mathematician of race,” only capable of seeing the world in black and white. A nice bit of shaming that would probably be deemed unacceptable in our victim culture society of today.

The fourth person is a flower child in a psychedelic print dress (one of the few topical touches that allow us to know the era) named Joan. There’s some off-page sex here as a penniless Joan offers her body to a taxi driver so he can give her a lift to New Jersey…plus an additional ten bucks! She has been compelled to Ruth’s clinic, and like the others she has her own sad background. I should mention that long stretches of Time Rogue aren’t even remotely sci-fi, particularly the parts with Ruth, Kelley more determined to examine the backstories of his various characters. This pays off, as he gradually builds a family dynamic, similar to what he did in the final half of Mythmaster.

And really, this is more of a character-driven piece than an action spectacular; the focus is more on this group of random people inexplicably thrust together by future events and how they work with one another, while temporarily being assailed by mental urgings from the disembodied Caleb. Action is promised though when we cut back to Century Twenty-Two and see the cyborg authorities of that era put together a Tracker who specializes in “detecting genetic continuities.” It is designed to track backwards in time through the various genetic streams to find the seven humans Caleb and Max Marie must’ve singled out as perpetrators of this future world. The Tracker is named Leda, and Kelley doesn’t do much to describe her, other than she is pretty.

The fifth person is Kirby, who shows up at Ruth’s house one day and promptly tries to rape Joan, whom he claims to love even though he’s never met her. Once this awkward bit is overlooked, Kirby turns out to be a swell guy. Seriously though at this point the brevity of Kelley’s paperback begins to rob his too-many characters of much depth. Kirby we learn is unhappily married and in his Caleb-possesion has learned that he and Joan are soul mates, destined to be married. But not much is made of this and the storyline comes off as hard to buy. Even worse treated is the sixth member of the group, a handsome gigolo type named Skeeter who lives in a cabin in the woods. He’s more of a cipher than anything else.

Kelley does a weird thing here; Leda, presented as the Tracker, gradually emerges to be a savior instead of a killer – unlike a Terminator, she’s not here to kill anyone, but indeed to prevent their deaths. It’s Caleb who plans to kill the seven, thus hopefully preventing his nightmare future. Leda explains this to Ruth when she appears to her one night; Leda’s capabilities are maddeningly vague, with her just appearing and disappearing with not much explanation. But Leda has gone back into the various timelines for each of the six – even she doesn’t yet know who the mysterious seventh person is – and has learned Ruth’s secret from the concentration camp. Leda explains what Caleb’s intent is and somehow instructs Ruth herself how to travel in time.

The seventh dude turns out to be a Mafia boss, and he’s so inconsequential to the plot as to be a waste of time; Kelley has it that this dude’s above-board business dealings, stuff he does to keep the prying eyes of the government from his mob activities, end up funding the cyborg research that will create the world of the twenty-second century. The other six are sent like automatons to a church, where the mobster’s daughter is getting married. Here the climax, such as it is, plays out. Rather than an action spectacular, Caleb is wrenched away in a mental fight with Leda, and ultimately the others realize that Ruth is gone – and, following Joan’s hunch, they deduce that she no longer even exists “in this timeline!”

Spoilers here, so skip the paragraph if you don’t want to know. Kelley unexpectedly delivers a toucing finale. We finally learn what happened at the concentration camp in 1943, the day that’s haunted Ruth. Her 1983 mind has traveled back in time to take control of herself in 1943, once again in the camp. The camp commander makes a daily game of choosing victims for the gas chamber, and each day Ruth has found a way to protect her kid sister. But on this particular day she has failed. We already knew this from the start of the book, but here in the finale we find out what happened afterwards: the commander, having chosen Ruth’s sister for the chamber today, asks Ruth if she would be willing to take her place. In the previous timeline Ruth said no, hating herself for her cowardice for the rest of her life. This time, of course, she boldly says “yes,” much to the commander’s surprise. So off she marches to the gas chamber, already forgetting Caleb and the others, as she has changed the future – perhaps the only book in history which features an uplifting finale involving a gas chamber!

While it doesn’t have the psychedelic vibe of Mythmaster, Time Rogue definitely scores in the character department. Kelley makes you care just enough about his characters that you want to see how they work their way out of this strange situation. The cyborg future is effectively portrayed, but still some of it could’ve been better fleshed out, like Leda’s character. Overall though I’d recommend Time Rogue for anyone looking for a quick pulp sci-fi read, one with an unexpected emotional depth.
Posted by Joe Kenney at 6:30 AM

Posthumanism doesn’t sound so bad, especially the older I get and the more flaws my body develops. Also I don’t think genderfluidity is “nightmarish.” Sheesh!