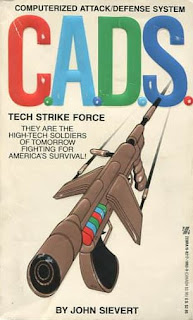 I’m really taking my time with the C.A.D.S. series, about one volume every two-plus years. I had to re-read my reviews of the first three volumes to remind myself of the characters and what’s going on. This was a smart move, as with the others Tech Strike Force opens en media res, with our armor-clad heroes emerging from the depths of the lake they escaped in at the climax of #3: Tech Commando, with only vague explanation of what came before.

Ryder Syvertsen (aka “John Sievert”) as ever whittles down his large group of C.A.D.S. so that we only focus on a few of them. That being said, a few “regulars” are killed off this time, but I still had no idea who they were or what they’d done in previous volumes. C.A.D.S. honcho Dean Sturgis is still the star of the show, the Ted Rockson of the C.A.D.S. world, if only less heroic or memorable. He still pines for his wife Robin, but won’t get much done in the way of his searching for her this time around; in fact, Robin doesn’t even appear this volume, which is a series first. Instead Syvertsen sticks with Sturgis throughout, and the dude manages to do pretty well for himself in the female companionship area, bedding three babes in this post-apocalyptic hellhole of America, circa late June of 1998.

Sturgis and Billy Dixon, aka the redneck C.A.D.S. soldier, separate from the rest of the squad as it makes its way back to the C.A.D.S. HQ deep in the swamps of the Bayou. This opening quarter of the novel basically just continues on from the denoument of the previous volume, with the two getting in various skirmishes with pursuing Reds and ultimately getting in a firefight with them in Colonial Williamsburg, which we’re informed has been kept undamaged due to the love the Soviet Premiere has for it. Syvertsen as ever doesn’t strive for realism, despite all the “tech speak” in the dialog; for example, we’re told that the C.A.D.S. suits weigh four hundred pounds, yet when Sturgis’s is so damaged that he can’t use it anymore, we’re informed that he gets out of it and pulls it up into the belfry of the house he’s hiding in.

Unexpectedly we get into some dark stuff, which goes against the grain of Syvertsen’s typical Saturday Morning Cartoon-esque vibe. Sturgis and Billy are taken aboard a sub, where they are interrogated by America-hating Veloshnikov and KGB torture artist Revin. The Reds immediately deduce that Sturgis won’t break, thus set their sadistic sights on Billy, judging that Sturgis will break so as to keep his young charge from harm. But Sturgis won’t break, refusing to give info even as Billy is beaten, his fingers broken, and then is friggin’ sodomized off-page by Revin. Meanwhile Sturgis has himself gotten some intel, shown a map of post-nuke US by Veloshnikov. Here Sturgis learns that the vast majority of the country has been destroyed by radiation, thus the “America” he and his C.A.D.S. are fighting to protect doesn’t much exist anymore.

The two are saved by the remaining C.A.D.S. soldiers, Sturgis’s buddy Tranh having taken command of the squad. Syvertsen keeps referring back to the first volume, thus the escaping C.A.D.S. happen to run into a group of mountainfolk who are fighting some Reds. They turn out to be none other than the McCoys our heroes met back in that first volume, and now these people have set up their own sort of backwoods utopia, complete with food, weaponry, and even New Age crystal healing. This is all like something out of Syvertsen’s Doomsday Warrior in tone and vibe; one thing that’s different, though, is that when Sturgis has sex with Cat, the hotstuff McCoy babe whose virginity he took back in that first volume, it happens off-page. The same can be said of Sturgis’s two other conquests in the book; Syvertsen, whether intentionally or not, seems at pains to whittle down on the crazy purple prose of his typical work.

Dr. Sheila de Camp, the Smurfette of the C.A.D.S., doesn’t much like these New Age crystals, and in fact barges in on Sturgis and Cat mid-boff to complain about them. This just turns out to be another instance of Sheila’s resentment for the women who bed Sturgis, with whom she’s gradually fallen in love. Meanwhile back at C.A.D.S. HQ our heroes learn that “mutated swamp fever” has returned in their absence and wiped out many of the “swamp women” who have taken up residence here, including Dieter, the tall babe Sturgis had some off-page lovin’ with last time. Not to be concerned, though, as soon enough he’s banging another leggy swamp babe, Gloria – but again off-page.

Syvertsen delivers some unexpected character development with Billy Dixon going nuts due to his rape back on the Russian sub; he pretends as if nothing happened, claims he remembers nothing of his captivity and torture, but he’s a kettle quickly approaching boil. He snaps one day and attempts to perpetrate his own rape, on one of the swamp women. While the other C.A.D.S. are ready to wipe him out, Sturgis instead is able to confront Billy in a fistfight, knocking his ass out but keeping him alive. Despite his misgivings Sturgis has to bring Billy along on their latest mission, despite his insanity; he’s running out of soldiers. However not much else is made of this by novel’s end, with the vibe that Billy’s quest for vengeance allows him to get past his mental troubles.

Speaking of callbacks to the first volume; if you recall, the C.A.D.S. ran across obese billionaire industrialist Pinky Ellis in that first one, the Jeffrey Epstein-type who went around in an armored limo and kept a bunch of sex slaves at his disposal. Well, the sex slave who made eyes at Sturgis in the first novel, Morgana, managed to escape Pinky, get to the President, and inform him that Pinky plans to give the Reds an experimental tank Pinky’s company was developing before the war. I figured this plot thread from volume 1 would be dropped, but Syvertsen clearly planned to get back to it, given the narrative spotlight he gave Morgana in the first volume. She and the President talk to Sturgis over the radio, Morgana finding the opportunity to tell Sturgis she hopes to meet him in the flesh someday – perhaps another dangling subplot to be played out in a future volume.

Now the C.A.D.S. must head to New Orleans, prevent the handover of the tank, and kill Pinky. So it’s back across the blasted United States for our heroes, who have had to repurpose their armored suits as the government is all out of E-Balls, and now they have to make due with regular missiles and whatnot. Syvertsen appears to be minimizing the godlike attributes of the C.A.D.S. armor, or at least not presenting them as so invincible as before. I assume this is an attempt at conveying some tension to the series, but regardless it’s hard to buy that these high-tech, computer-operated suits can even still work in this post-nuke hellzone.

Syvertsen still doles out unexpected and welcomed goofiness, like when the C.A.D.S. on their way to New Orleans run into a crotchety old Western author who lives alone in his decimated town, cranking out “the greatest Western in history.” Dying of radiation and determined to finish his book, the dude begs for more narrative time but isn’t given nearly enough. Instead we get the tiresome return of Carl the King, the Manson-esque serial killer who also last appeared in the first volume. He’s now declared himself King of Biloxi (wearing a paper Burger King crown as evidence of his royalty), leading the same group of escaped mental patients as last time. The C.A.D.S. make quick and somewhat gory work of them, but inexplicably Sturgis allows Carl and his inner circle to escape, presumably to return and annoy us again in some future volume.

Sturgis scores for the third time in the book with none other than Sheila de Camp, Syvertsen paying off the long-simmer hate-lust relationship he’s been developing between them since the first volume. This one’s done for more of a comical effect given that the two are instantly spatting post-boink, as Sheila wants to get her hooks in Sturgis and keep him for herself. Meanwhile Sturgis tells her this is just a casual thing and he can’t get too involved with one of his subordinates. It seems clear that this will play out in ensuing volumes.

Pinky Ellis is a more interesting villain, weasely and obsese and commanding his private army from the safety of his armored limo. His secret weapon turns out to be a flying tank that shoots lasers, and given that it’s up against a squad of guys in armored suits, maybe you’ll get what I mean when I’m always comparing C.A.D.S. to a cartoon. One of the C.A.D.S. soldiers stands out here: Joe Fireheels, nicknamed “The Survivor,” who refuses to go into combat in the powered armor, pleading with Sturgis to allow him to follow his instincts. Also one of the “main” C.A.D.S. soldiers is killed in the firefight, one we’re informed has been Sturgis’s close friend for years, but again I didn’t much remember him.

As ever Tech Strike Force ends as soon as this latest battle is over, Sturgis and soldiers destroying the laser tank and delivering Pinky a memorable sendoff – one that involves fire ants! – but Syvertsen leaves many plot threads dangling. I’ll try to get to the next volume a little more quickly, but overall this series still comes off like a pale imitation of Doomsday Warrior.

Oh and due to the holiday only one post next week – it will be up on Wednesday.
Posted by Joe Kenney at 6:30 AM