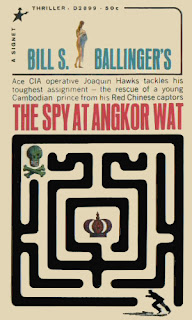 The Spy At Angkor Wat, by Bill S. Ballinger
May, 1966  Signet Books

The fourth instalment of Joaquin Hawks is of a piece with the previous three, more of a study of Southeast Asia in the mid-1960s than an outright secret agent thriller. If you want to know what Cambodia was like before the Vietnam war really got raging, The Spy At Angkor Wat will be right up your alley. However I’ve gotta say I enjoyed this one, mostly because I put myself in the right frame of mind before I read it – I didn’t go in expecting any action or thrills or whatnot, just a slow-going Cold War thriller in the Asia theater.

I’m still having a hard time with Hawks himself, as he’s too much of a cipher for the reader to identify with. I mean don’t get me wrong, all these sub-Bonds of the ‘60s were ciphers, even Nick Carter, but at least they had modicums of personalities. Hawks just doesn’t. On the one hand he’s a swinging ‘60s type whose code name is, preposterously enough, “Swinger,” but on the other he’s a total chameleon who can slip into Southeast Asian countries and go around undetected, posing as a “Cham-Malay.” Plus he can play a mean acoustic guitar. Perhaps if more time were spent on the “swinging ‘60s” aspect of his personality he might be more relatable, but so far Ballinger has denied us this; Hawks’s intros in the Western world are over and done with in mere pages – usually rendered via flashback, as is the case here – and the novels play out entirely in Asia, with Hawks in disguise.

As ever Ballinger opens up on a nice setpiece; Hawks, newly arrived in Phnom Penh, finds his sole contact in Cambodia dead – and recently murdered at that. Hawks starts a fire in the man’s store to camouflage his escape, and later takes out a tail in a tense scene. Here Hawks employs his karate skills, quickly breaking the dude’s neck. Later he takes out another tail, this time killing with a knife. But that’s it so far as the action goes in The Spy At Angkor Wat, with the rest of the novel playing out more on a suspense angle. Until the very end, where Hawks’s belt-gun is once again employed. Wait, there is one arbitrary action scene, early on, but it’s just setup for what comes later: in Phnom Penh Hawks beats up two guys who are chasing a pretty young Chinese woman, but she hops in her car and takes off before he can learn who she is.

But why is Hawks in Cambodia? In the flashback briefing sequence he’s told of young Prince Thom, whose “pro-West” father was recently killed by Commie dissidents. Poor little Thom’s entire family was wiped out, and now the prepubescent prince is hiding somewhere in Cambodia. Hawks’s assignment is to find him and somehow sneak the kid out of Cambodia with absolutely no help from any in-country contacts. Essentially it’s a kidnapping venture, and Hawks is none too enthused about it. So what does he do, folks? He goes over to Phnom Penh, finds his sole contact there already dead…and then buys the restaurant of some expat Frenchman, disguises himself as a “Cham-Malay,” buys a fighting cock and a guitar(!), and begins to bicycle across Cambodia.

I mean friends this is really what Joaquin Hawks does. You have to wonder what the hell secret agent training school he went to. “No, don’t go in with guns blazing – buy a fighting cock and a bicycle and go deep in-country!” It’s all just so absurd, but as ever Ballinger delivers it with a dry, matter-of-fact narrative style so that the reader can only go along for the ride (as slow-going as the ride is). What’s most humorous is that Hawks’s “strategy” relies solely on luck; he comes across the fighting cock apropos of nothing, buys it (with no explanation given the reader why he’d do such a thing), then uses it as an “in” with the various villages he travels to.

Gradually it becomes clear to the reader that Hawks is planning to immerse himself in the country in the hopes that he’ll magically come across the hiding prince. After some interminable journeying deep into Cambodia, occasionally tending to his cock (I mean the fighting bird!!!), Hawks finally arrives in the village which Prince Thom came from and is most likely hiding in. Here he encounters a local who turns out to be a Malay, so Hawks quickly drops his Cham-Malay guise. I don’t even know what the hell a Cham-Malay is; my wife’s actually from Malaysia so maybe she knows. I doubt I’ll ask her, though. Some things are better kept a mystery.

Now posing as a Moro, same as he did last volume, Hawks befriends the dude and proclaims himself as “Yusef.” He plays the guitar for the townspeople, gaining fame, and eventually is admitted into the royal palace to play for the guards. Clearly Hawks is not working on a tight timetable. The next day Hawks is summoned again and told that he is to give a performance for the young prince, who as Hawks suspected is hiding out in his royal chambers. But when Hawks goes there that night he finds an attractive young Chinese woman acting as the little boy’s guardian, and it’s the same Chinese babe Hawks saved back in Phnom Penh. He hopes she doesn’t recognize him.

Ballinger delivers an effectively-rendered scene in which Hawks is summoned, late that night, to an empty wat, and there the Chinese babe waits by a statue of the Sleeping Buddha. Her name is Shara Da and she knows “Yusef” as the same karate-fighting man who saved her life. First she confirms he’s not a Commie, then she asks for his help – she needs someone strong to help her and Prince Thom escape the palace, as the boy’s life is in danger. Along with his Malay buddy, Hawks initiates the escape that very night, the group of four slipping out into the dense jungle and narrowly avoiding various search parties.

Once they get in the jungle the novel settles back to the customary long-simmer. It takes weeks for them to make it through the dense sprawl; again Hawks’s “strategy” relies on luck. Originally he had no idea how to get Prince Thom out of the country, as they’d be surrounded by enemies or danger – one dangling threat Ballinger unfortunately doesn’t exploit is that if they’d taken the Vietnam route they’d go right through dense Viet Cong territory – but thanks to an off-hand comment from Shara Da, Hawks learns that Prince Thom’s dad had a private plane, stored over near Angkor Wat.

Ballinger doesn’t bring Angkor Wat to life as much as you’d expect he would; the travelers arrive after their long journey, rent rooms in a nearby hotel, and get some rest. And meanwhile Hawks gets lucky with Shara Da; it’s nothing explicit but slightly more risque than previous books. The commandeering of the airplane is where the real climax occurs; the fighting cock serves as a distraction while Hawks gets everyone on board, then his belt-gun is used in a memorable moment. But after this we’re treated to an overlong plane chase, as Hawks must fly them to safety while the enemy closes in. Our hero for once gets hurt, taking a shard of glass from the busted windshield in his leg.

The relationship between Hawks and Prince Thom is one of the highlights of the book. Ballinger, true to his era, doesn’t treat it with the maudlin gravitas you’d find in today’s dreck. I mean keep in mind, little Thom’s lost his entire family and is now all alone, and clearly this stranger “Yusef” is becoming a father figure for him, giving him lessons on bravery, temperance, and survival. So too is Shara Da falling in love with Hawks, but while Ballinger doesn’t go out of his way to bang us over the head with it, we do see at novel’s end how worn and lonely Hawks is at the completion of this particular assignment. Having gotten Thom and Shara Da out of danger and into friendly hands, he knows he’ll never see them again.

But then as I was griping before, it’s like we’ve never even got to meet Joaquin Hawks. The brief intros in California aren’t enough, with him trading glib dialog with his CIA boss. His in-country escapades have him practicing role camouflage to the extent that even the briefest flashes of “the true Hawks” come off like revelations. There is only one more volume to go, so my suspicion is readers of the day weren’t latching onto the series because they felt the same – your hero needs to have at least something memorable about him.
Posted by Joe Kenney at 6:30 AM