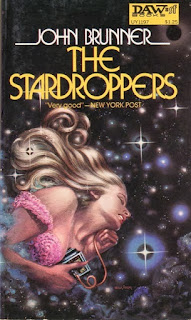 This is the first John Brunner novel I’ve read, though I’m familiar with him and have several of his books. One of those wildly prolific British sci-fi authors, Brunner first wrote this as a short story in the early ‘60s and then fleshed it out in novel form in the ‘70s, updating the story to tap into the psychedelic era. Kelly Freas’s cool and subtly exploitative cover art (love the strategic placement of that transistor radio!) aptly sums up the theme of the novel – teens (and adults) are tuning in and dropping out thanks to mysterious space signals they’re picking up on special radio-esque gadgets called “Stardroppers.”

Brunner doesn’t really tell us when the novel takes place, but it would appear to be the ‘80s or thereabouts. The “LSD era” is referred to as years ago, and also we’re informed that Britain decided to “drop out of the arms race” a decade ago and thus has become a sort of hotbed of intrigue and spies. So in other words similar to the US of NYPD 2025. And also our hero, an agent named Dan Cross, is an American who works for “The Agency,” which isn’t the CIA – we’re told that this organization was only formed several years ago. And also that its interests are global; there is a bit of an elitist and condescending tone (redundant description, I know) to the novel, with Cross (and thus Brunner) often putting down populism and having his secret agent protagonist proclaim that he’s “A human being first and an American second. The way it should be!” Cross literally sneers at anyone who doesn’t belive in globalism. Unfortunately he’s a bit of a prick and doesn’t engender much reader empathy.

Well, we learn that Stardropping started fairly recently but has broken out in a major way. It’s not just limited to hippie types but people from all walks of life. India and England are the two main hubs of ‘dropping, and the Brits are going for it because it’s a way to tune out of all the tensions their country has gotten into. Cross has been tasked with researching the phenomenon as America is a bit behind on the fad, and there are rumors that something sinister is afoot, mainly that some Stardroppers have flat-out vanished while tuning in to the cosmos. We meet Cross as he’s just arrived in London, posing as a tourist and toting an expensive custom-made Stardropper he picked up from a Californian specialist.

But what exactly is Stardropping? Honestly folks the slim book is pretty much devoted to that entire question. You won’t find much in the way of action or intrigue here – and you definitely won’t find any lurid elements. Other than a random utterance of “fuck” the book is basically G rated. Anyway back to Stardropping. It was discovered a few years before by a British scientist named Rainshaw. Apparently this device he invented picks up signals from space, and just as with a normal radio there’s a spectrum of “stations” to chose from, with listeners becoming devoted to one or the other. Eventually the proposition was put forth that these signals are actually messages from alien beings.

Brunner clearly has patterned this new world after the LSD era; “Dropped any good stars lately?” apparently being a common question among enthusiasts. But the novel lacks the psychedelic spark I wanted, which is curious given the publication date. In fact the Stardropper enthusiasts are clean and tidy, complete opposite of grungy hippies. There also isn’t as identifiable a culture, but then the novel’s perhaps too slim for it. The Stardroppers our hero meets are for the most part typical British people who have a tendency to gather together and listen to bizarre bleeps and bloops from space, but otherwise there’s nothing remarkable about them. Save that is for one or two basket cases who have been mentally unhinged by Stardropping; Cross meets one of these immediately upon arrival in London, but it’s the only one we get to see in the novel – and later we find out that there was more to this particular character than suspected.

Cross’s main contact is a Scotland Yard cop named Redvers, who in brief backstory was a young cop when the “LSD problem” was at its height. Now he’s middle aged, cynical, and bitter. There’s a bit of America-bashing when he claims it’s “about time” the Agency started looking into Stardropping, given that America has so far left the topic unexplored. This was a bit hard to buy, but I figured it was Brunner’s attempt at featuring a character who was just as clueless about the situation as the reader. Speaking of which Brunner does a fair job of capturing American speech for Cross – in other words he doesn’t sound just like the British characters in the novel.

Curiously, for a book with a secret agent and a device that might impact the world, The Stardroppers is pretty flat and slow-going. There’s no point where Cross does any “secret agent stuff,” and he operates more like a reporter. He just goes around, pretends to be a Stardropper enthusiast, and picks up what info he can. The only character who really sparks is Lillith, a sixteen year-old runaway whose mother destroyed her Stardropper; she enters the text when she attempts to steal Cross’s Stardropper. After a chase he gets it back, feels sorry for her, and lets her try it out. She also provides an in for another group of Stardroppers, ones who live together in a sort of commune (only it’s clean, of course), and Brunner takes this opportunity to fill up lots of pages with expositional dialog about what the Stardroppers might actually be tapping into.

More dialog comes courtesy the studious group of Stardroppers who meet at Cosmica, a store that sells Stardroppers. The sequence where Cross tours Cosmica is pretty cool, and was presented almost like an audiophile visiting a well-stocked record store. A guy named Watson runs the place, and there’s also an attractive young woman named Angel whose rationality about Stardropping appeals to Cross. Brunner doesn’t go the expected “romantic subplot” route but instead introduces more suspense here, as Angel was engaged to Robin Rainshaw, young Stardropper afficionado – and son of Dr. Rainshaw, Stardropper discover – who happens to be one of those who vanished.

We get to see two characters vanish while Stardropping, but the scenes are too goofy to have any impact. People sit there with their headphone – and Freas’s cover illustration is accurate because Brunner specifies that only one headphone is used with Stardroppers – listening to the cosmos (alternately described as white noise, surf, or even animalistic screams), and then suddenly zap away into thin air. It seems that they’ve become so attuned to a particular station that it beams them right into the great yonder; Robin Rainshaw was the first of these to vanish, and Cross’s assignment is to ensure something nefarious isn’t zapping these people away.

The climax solves the mystery, but in a way that detracts a bit from the suspense that’s gone before. Cross for once uses some secret agent skills and sneaks into Watson’s home. There he bumps into none other than Robin Rainshaw, who is wearing a space suit and seems to have just appeared. Long story short – and spoiler warning for the rest of the paragraph – the Stardroppers who have vanished are beaming out into space, and all of them are working with Watson on a secret project. The ones who zap and don’t come back “weren’t good enough,” per Watson. It gets a little goofy here when Cross himself beams momentarily into space, displaying a skill he of course didn’t know he had, and by novel’s end it’s implied he’ll be part of Watson’s venture, which happens to be the removal of weapons of mass destruction from the various military bases of Earth and depositing them in space.

Since Brunner’s a “real” sci-fi writer and not a pulp sci-fi writer (guess which of the two I prefer), there’s a lot of print devoted to theories of how Stardropping works and how real-time exists with the space-time of the Stardroppers and other stuff I skimmed through because I just didn’t give a damn. I wanted a fun, fast-moving story with pschedelic overtones, and unfortunately that’s not what I got with The Stardroppers. And if that’s what you want, I still highly recommend After The Good War.
Posted by Joe Kenney at 6:30 AM

I think you might have more fun with 'The Jagged Orbit', Brunner took what was going on in the US in the late 60s and made a straight-line extrapolation that contains some eerily prescient guesses.

I haven't read this one, but I've read a lot of other Brunner. Since he did write fast, a lot of his sixties novels are forgettable, but I remember liking CASTAWAYS' WORLD, later revised as POLYMATH-- and upon looking it up, found out that it was the second book in a two-book "series" of sorts, but I didn't realize it, even though I read both.

Brunner's "Stand On Zanzibar" (and the sequel "The Sheep Look Up") is the only novel of his I can remember being talked about much. Not that I am an expert on that era's Sci-Fi.

The only John Brunner book I’ve read all the way through was The Sheep Look Up (1972). It’s about the collapse of society as pollution, famine, disease, and poverty all increase and civilisation is not prepared for that many crises at once. The only hope lies with environmental activists, but even then, there’s a snide tone to the book, with the activists walking through traffic and painting motorists’ windshields black, and beating the motorists up if they object; and the novel seems to have no sympathy for those of us who are not left-brained and do not seek degrees in STEM. Very depressing.

I started to read another Brunner novel, The Shockwave Rider (1975), but I was reading someone else’s copy and had to give it back. It seems similarly dystopian and depressing, though I can’t disagree with many of the concerns that Brunner raises. I noticed it had some proto-cyberpunk ideas, some of which would also show up in a fascinating 1980s comic book called Shatter.